Fresh water scarcity will be the defining global crisis of the 21st century. A decade ago, analysts warned of future water wars, even a world war. Water was labelled “the next oil” because of its importance to economic growth, and its use in everything from agriculture to industry, energy and manufacturing. We have alternative energy sources, but nothing can ever replace water.

“The universal recognition of human dependence on water typically makes it the first issue that states can find common ground to co-operate over, even in cases where states would willingly go to war over other issues,” says Professor Owen McIntyre of University College Cork’s School of Law. “Necessity breeds co-operation.”

States increasingly tend to solve their disputes over river basin and aquifer use through diplomacy and, where necessary, arbitration and judicial dispute resolution. India and Pakistan are a case in point; the Indus River Basin Treaty between the rival nations has survived three wars.

More likely, water scarcity will provide a secondary cause of conflict. It will emerge as a de facto weapon and a strategic target. It will cause sub-national civil unrest, heighten geopolitical tensions around transboundary rivers and aquifers, force large-scale migration, and inflame regional instability.

Expect growing localised tensions around specific watersheds between one ethnic group and another. Rather than war between Cameroon and the Central African Republic, today we witness conflict between Cameroon’s nomadic Fulani herdsman, forced southwards by desertification, and settled agriculturalists in the Central African Republic into whose lands they’ve travelled.

In Syria, the worst drought in close to a millennium has been partly blamed for the country’s generation-defining civil war, and the radicalisation that led to the formation of so-called Islamic State (Isis). By 2011, 1.5 million farmers were forced to abandon their land following successive crop failure caused by a four-year drought.

The displaced people, seemingly forgotten by the government, became a wellspring of recruits for the Free Syrian Army, as well as Isis and al-Qaeda. As the conflict deepened, engulfing Iraq, water supplies along the Tigris-Euphrates river basin became a de facto weapon for Isis in a manner that recalls past conflicts in the region, between Syria and Iraq, Syria and Israel, and Iraq and Iran.

In a chilling instance of the susceptibility of the global economy to climate change and the fragility of peace, droughts in Russia have been connected to the rise of the Arab Spring. In 2011, Russia experienced droughts so severe that it banned the export of wheat to protect its own food supply. The move seriously affected net importers in the Middle East and North Africa for whom bread is a large part of the diet. By 2012, bread prices in Tunisia and Egypt shot up, and food shortages struck a match to an underlying tinder of discontents. The following year there were riots and later revolution.

“Here we have the spillover of a drought a long way away in one country resulting in political consequences and conflict in distant countries,” says Professor David Grey, hydrologist and policy adviser, who teaches at the universities of Oxford, Harvard and Tsinghua, and headed the World Bank water programme.

The fear is that such conflicts will increase in number as the global demand for water rises exponentially. World population will rise from 7.4 billion today to 10 billion by 2050 and, over the same period, global water demand will increase 55 per cent. Agriculture, which already accounts for more than 70 per cent of global freshwater usage, is forecast to increase another 60 per cent, while industrial water demand is expected to increase between 50 and 70 per cent, according to the World Bank.

As early as 2025, two-thirds of the world’s population may face water shortages. Climate change will intensify the devastation. According to the Intergovernmental Panel on Climate Change, each one degree celsius mean temperature increase could lead to 20 per cent reduction in renewable water resources.

Worst affected will be the world’s poorest countries which lack the capacity to adapt. Just last year, for example, four years of drought in Zimbabwe were followed by floods that killed 246 people.

“These countries have limited capacity, limited resources, limited knowledge and yet face the most complex problems,” says Professor Grey, who has worked on international water management for 45 years, and has now made it his mission to focus the world’s best minds and emerging talent on these urgent problems. “We need to build capacity, to build universities and to strengthen regional knowledge.”

Improved monitoring, data-sharing and more accurate climate modelling are essential. Currently the meteorological station density in low-latitude African countries is anywhere between 1 and 10 per cent of the met station density in Europe, he says, adding: “You cannot manage what you cannot measure.”

By 2030, water scarcity could displace 700 million people worldwide, according to the United Nations Department of Economic and Social Affairs. Over the same period, Africa will experience the fastest population growth, rising to 3.4 billion people by 2100, when one in three of the world’s population will be African. “You think migration is a challenge to Europe today because of extremism,” then-US Secretary of State John Kerry told a climate change conference in 2015, “wait until you see what happens when there’s an absence of water, an absence of food or one tribe fighting against another for mere survival.”

More than half the world’s population rely on water resources that are international, however around two thirds of the world’s transboundary rivers lack a co-operative management framework. International treaties are essential to mitigating future conflict and the very process of their agreement is stabilising through widening political participation, enhancing transparency, building trust and spreading confidence.

Often upstream states hold the key to co-operation. Turkey is upstream of several nations in the Tigris-Euphrates basin, most crucially Syria and Iraq, but has largely exploited its water rights, building huge water infrastructure, including 140 dams to store water, for its own benefit, without consideration given to downstream states.

In an interesting turn of events, China is emerging as a responsible upstream neighbour. The country shares 110 transnational lakes and rivers, including the Mekong, Indus, Ganges, Brahmaputra, and the central-Asian Amu Darya and Syr Darya rivers, which flow into 18 downstream countries.

Only recently, however, has China begun to share its water data, which was previously classified as a military secret. Some argue that China is co-operating now, only having successfully and aggressively provided for its own water needs. Neighbourliness will ensure stability in its backyard and the opportunity to sell its hydro-engineering expertise.

Here lies the crux. States will always act in their own interests. The challenge is to help states calculate those interests in the most sophisticated way. Benefit-sharing agreements provide for the sustainable and equitable management of shared water systems according to each nation’s dependence. In most river systems, for example, water comes from high ground, where you cannot grow food, but can generate hydroelectric power; whereas in lowland floodplains, you can grow ample food, but not generate much power. Exchange and trade of these benefits would provide net benefit to all.

Professor McIntyre observes that policymakers have already begun to reframe water management as something more subtle than a zero-sum game. “People now talk in terms of ecosystem services, ecological flows and how to protect the whole ecosystem, taking water storage, hydropower, water cleanliness and flood attenuation into account,” he says.

At this crucial juncture, neutral, unaffected nations should play a role in advancing these agreements. Halting overseas aid and focusing national interests inwards will prove highly irresponsible in the long run, argues Professor Grey. He concludes: “The problems of the complex parts of the world are problems for all of us and, if we don’t contribute to a solution, then we will all suffer.” 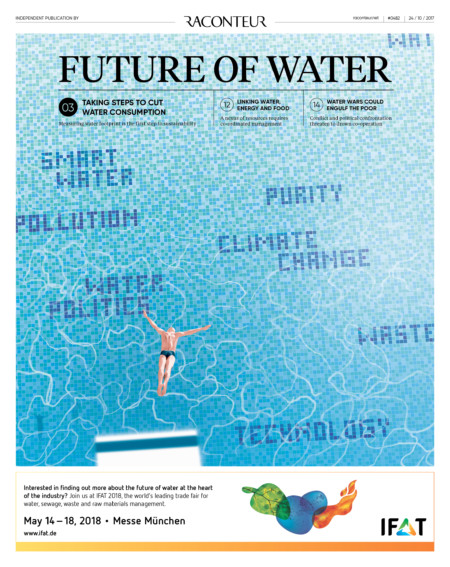