“The most disturbing half an hour I’ve spent in months.” That was the verdict from one of the UK’s top chief executives after listening to Brexit secretary David Davis outline his vision for leaving the European Union.

Other than a warning that planning to leave the EU would be comparable in complexity to preparing the Moon landings, it had been a typically upbeat performance from Mr Davis. Yet it was short on practicality.

If the paucity of detail on Brexit is concerning for some bosses, spare a thought for their procurement departments, which are being asked to come up with plans and remedies despite having precious little to go on.

With Brexit-influenced supply chain disruption already underway, procurement departments are on the front line. Almost half of European businesses with UK suppliers are already finding replacements elsewhere in the EU, according to a survey of 2,000 supply chain managers conducted by the Chartered Institute of Procurement and Supply (CIPS).

Industries including retail and hospitality that failed to hedge their currency exposure have already seen an increase in the cost of goods purchased from overseas, with some having to adjust their purchasing plans. Others with hedges in place will soon see them expire.

With potential changes in contract terms, the identity of suppliers and the prospect of possible trade tariffs all looming as a result of Brexit, procurement’s role has rarely been so vital or under the spotlight.

David Lowe, partner at Gowling WLG, a law firm, says: “Every supply chain is international.  Even if the supplier is local, the components and raw materials will almost certainly come from somewhere else. And Brexit will impact international trade – the impact of tariffs, the impact of cross-border hassle and delays, and also the non-tariff barriers, for instance the local regulations that impact products.

Yet how do you navigate such stormy waters while you’re sailing blind?

Colin Sharp of C2FO, a financial technology company that works in supply chain finance, says: “Procurement teams’ best bet is to plan in advance for different scenarios, especially for those [that are] more punitive.”

Supplier risk assessments may switch from bi-annual reviews to as often as weekly for first and certain key second-tier suppliers, he says.

Mr Sharp says some businesses will have to prepare to make tough decisions, such as evaluating the impact of replacing a supplier according to its significance for the business, but also possibly based on suppliers’ location, in the UK or abroad. “By building supply chain redundancy and flexibility, as well as defining a portfolio of real options in advance, these teams will almost certainly mitigate potential disruptions.”

According to the recent CIPS survey, more than a third of UK businesses plan to respond to Brexit by beating down suppliers’ prices.

“After the 2008 financial crisis, many corporates embraced payment term extension. This strategy led to short-term improvement in the cash management metrics, but created a void between those with excess cash in their balance sheets and those suppliers needing working capital to manage longer payment terms,” he says.

If the UK stays in the single market – an option which for now at least appears to be off the table – then the impact of Brexit might yet be minimal for procurement, says Mr Lowe.

How do you navigate such stormy waters while you’re sailing blind?

“If the UK leaves the single market, but stays in the customs union then changes will be moderate,” he adds. “But harder Brexit will potentially have much more significant impacts. Some are obvious, for example tariffs, but others are less clear, like the European Union suggesting that UK court decisions on business disputes could cease to be enforceable in the EU, which would result in an unwelcome increase in risks and costs.

“And uncertainty of when the change will happen is also a major issue. It could be in 2019 or some years after that.”

The uncertainty is at least a boon for procurement recruiters, who are reporting significant demand as companies beef up their supply chain teams in an effort to get ahead of any disruption that may lie ahead.

Scott Dance, director of Hays procurement and supply chain division, says: “Demand is high for talented procurement professionals. As we tackle an unpredictable economic and political climate, many organisations are prioritising [their] procurement team’s potential in making sure the changes have limited business impact.”

The problem is that supply doesn’t always meet demand. A Hays survey found that half of employers have struggled to find the right procurement staff over the last year, while almost the same proportion said filling procurement roles was one of their biggest recruitment headaches. 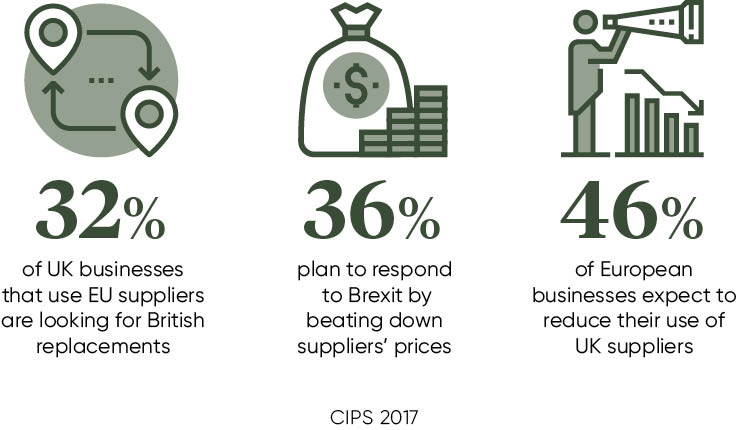 For those who are trying to plan ahead, what can be done? Mr Lowe says responses range from the short term to the detailed. A minority of companies are modelling a variety of Brexit outcomes against their supply chain.

He says: “It is possible to model what the impact of a hard Brexit and World Trade Organization rules structure has on tariffs and other outcomes. It does not give the whole picture, but it will highlight key risk areas where contingency plans may need to be made.”

However, the reality is that many businesses are still taking a wait-and-see approach, perhaps hoping that nothing will really change.

“It’s like driving on the M6 knowing there is a jam a few junctions ahead, deciding that it will either clear or you will be stuck in the jam with everyone else,” says Mr Lowe. “The problem is that when you are in the jam you wish you had got off at the previous junction and taken the alternative route.”