Stroke cuts lives short and has devastating effects on survivors, yet there is a desperate shortage of funding for research into its prevention and rehabilitation of patients

It strikes every three-and-a-half minutes with devastating results. Victims can be left severely disabled with lifelong care needs while one in eight strokes results in death within 30 days.

Shifting age demographics and lifestyles mean we are living longer with more chronic illness, and although stroke is a spectre of old age, its potential to take and devastate lives still ranks lowly in terms of public perception and research funding.

The public is thought to fear cancer, heart disease and dementia way above stroke. It is a disconcerting view that can dilute fundraising and delay vital research into an event that happens 152,000 times a year in the UK, according to the Stroke Association’s State of the Nation: stroke statistics report. 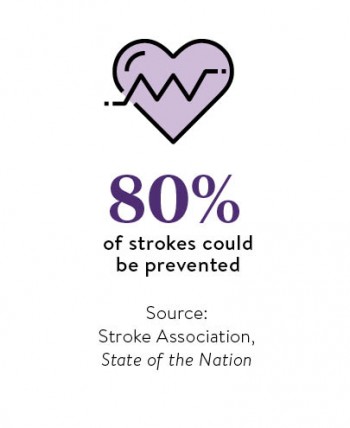 “Stroke is one of the biggest health issues people face today and it will take a life every 13 minutes,” says Jim Swindells, director of fundraising at the Stroke Association charity. “It is also the leading cause of complex adult disability in the UK, and that can be devastating for the survivor and their loved ones.”

Stroke costs the nation an estimated £9 billion a year in health and social costs, but its funding is dwarfed by other conditions. A massive £544 million (64 per cent) of the £856 million spent on research in 2012 went to cancer, while coronary heart disease benefitted to the tune of £166 million, but stroke trailed with £56 million.

Stroke incidence rates fell 19 per cent from 1990 to 2010 through improved services, according to a report in The Lancet. But an ageing population, combined with long-term illness such as hypertension, diabetes and atrial fibrillation (AF), are a tinderbox for attacks and the stroke burden, from illness to premature death, is predicted to double by 2030.

“It is very frustrating because stroke is going under the radar and, although it can be devastating, people are nowhere near as afraid of it as they are of cancer, heart disease and dementia,” says Mr Swindells.

The need for more funding

“We are convinced we can make sweeping advances if we get more funding. There are exciting areas of research into preventing and helping people recover from stroke, along with great progress in the UK on robot-assisted rehabilitation and the use of stem cells.

Until comparatively recently it was thought that recovery from stroke would be luck of the draw, but we know the brain has plasticity and can recover

“The cost of dealing with stroke is enormous, so if we can prevent it and help people recover quickly, there will be a real economic bonus for the country as well as the benefit for patients.

“Until comparatively recently it was thought that recovery from stroke would be luck of the draw, but we know the brain has plasticity and can recover. Size matters with research – and we need more funds.”

The Stroke Association has been championing research for 25 years as well as providing services for survivors, while the British Heart Foundation currently supports 29 research projects, with £13.9 million invested directly into stroke, and further funds a wide variety of studies into atherosclerosis, a major cause of stroke.

British universities and companies are also pushing the boundaries of innovation, and the Bridgend-based firm ReNeuron is showcasing promise with its novel CTX stem cell therapy to regenerate motor function in stroke victims which is now in phase II clinical trials.

But there is still concern about the UK uptake of NOACs, a class of drugs also referred to as novel anticoagulants, which are prescribed to reduce the risk of stroke. Despite the National Institute for Health and Care Excellence (NICE) approving their use as part of a cardiovascular strategy in 2014, figures showed that less than 50 per cent of patients admitted to hospital with stroke caused by AF had been taking medication.

The Association of the British Pharmaceutical Industry’s Stroke Prevention in Atrial Fibrillation Initiative (SAFI) is concerned about the alarming range of NOAC prescription – from 4 to 70 per cent – across clinical commissioning groups (CCGs).

“This means patients are subject to a postcode lottery,” says Jo Taylor, vice chairwoman of SAFI. “Some 7,000 strokes and 2,000 premature deaths could be avoided each year with effective management of AF.

“Consistent adoption of NICE guidance and widespread dissemination of best practice in service redesign in all CCGs is essential to save lives and prevent what are potentially avoidable AF-related strokes, benefitting patients, the NHS and the economy.”

Treatment of strokes falls into two broad categories: acute care where early treatment is vital; and rehabilitation which can take months or years.

The nation’s stroke services have been revitalised over the last decade, but rehabilitation is still the subject of much concern with variable levels of services and potential for dislocation between the authorities that share responsibility for post-hospital care in the community.

Patients are entitled to 45 minutes’ daily rehabilitation in hospital, be that occupational, speech or physiotherapy, but experts fear the gains are not always maximised when the patient returns home.

In addition, the British Association of Stroke Physicians warns of gaps in the healthcare workforce with 25 per cent of stroke places unfilled at training and consultant level, along with nursing shortages in some hyper-acute stroke units.

Stroke services and public awareness have improved significantly, but the challenge to secure effective and accessible treatment for all patients remains.