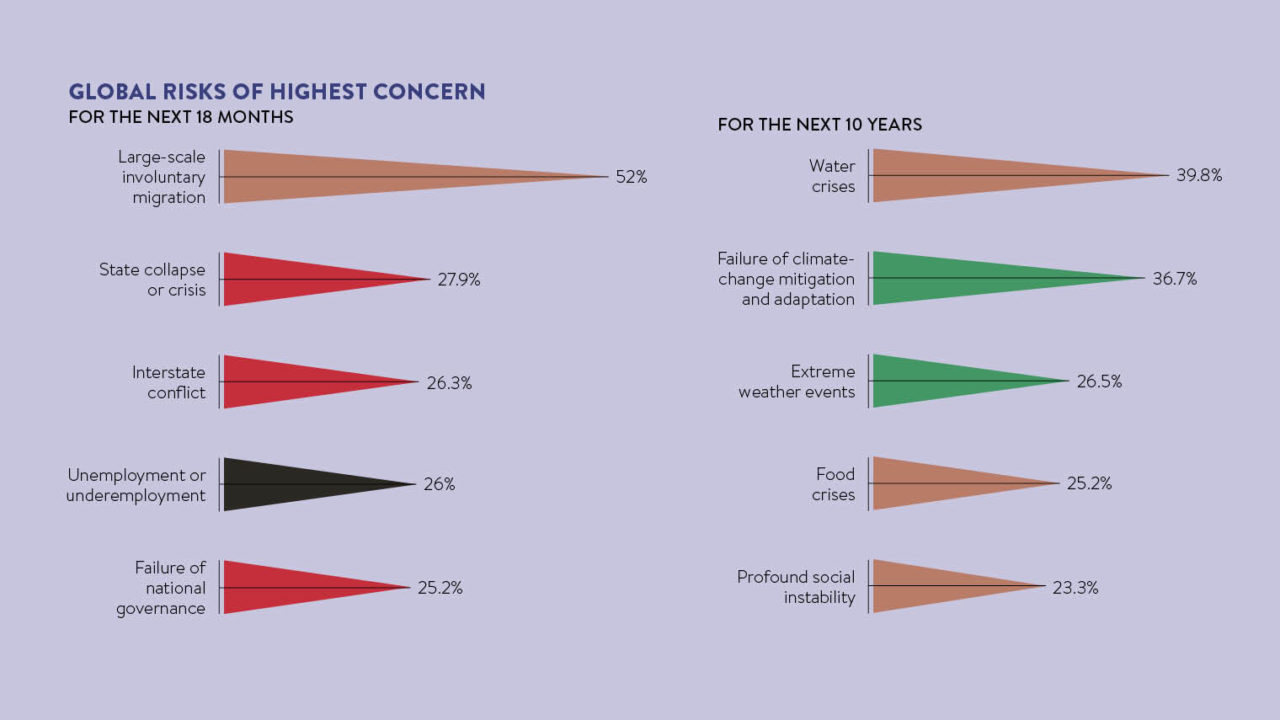 In an increasingly global and interconnected world, political instability, unrest and terrorism can have a profound impact, disrupting supply chains, affecting staff safety, causing damage to property and interrupting business.

Geopolitical and societal risks topped the list of concerns on the World Economic Forum Global Risks Report 2016, with 79.4 per cent citing state collapse or crisis, interstate conflict and failure of national governance as causing the greatest concern over the next 18 months. With its close relevance to geopolitical risk, 52 per cent were concerned about the widespread ramifications arising from large-scale involuntary migration.

The findings give some indication of how UK business can be disrupted by geopolitical events at home or abroad, clearly a primary concern for business leaders. Risk management respondents to this year’s Allianz Risk Barometer cited business interruption as their top global risk for the fourth year in succession. Alongside traditional drivers, such as natural perils, they identified geopolitical instability as a new source of disruption.

Whatever the nature of the threat, organisations need to prepare for a man-made catastrophe in the same way they have always prepared for a natural event, says Charles Hecker, global research director at Control Risks. “We need to be able to forecast thunderstorms and political storms at the same time,” he says. “You have to have a very good bird’s-eye view of your global footprint. Companies and organisations that do not have detailed and tested crisis management and crisis response plans will be caught out.”

While the UK may be relatively well insulated from terrorist incidents, an increasing proportion of UK businesses have operations overseas or they may source components and services from global suppliers. This is where geo-mapping can be a useful tool in helping to understand an organisation’s global footprint.

In its Roads to Resilience report, Cranfield School of Management and Airmic identify the importance of a rapid response to a crisis. It uses the example of the InterContinental Hotels Group, which found itself “in the centre of the storm” when the Arab Spring broke out. The organisation immediately went into crisis management mode and assisted other hotel groups that were adapting to the rapidly escalating situation.

“Some of the businesses that responded most effectively to recent unrest and terrorist events are those that have plans and practise them,” says Julia Graham, technical director at Airmic. “I know several who, when events happened in North Africa, Paris or Belgium, because they had plans and had rehearsed them, knew what to do and their people also knew what to do.”

A duty of care towards staff is essential, says Ms Graham, formerly the chief risk officer of international law firm DLA Piper and president of the Federation of European Risk Management Associations. She was at the airport in Brussels when the Paris attacks were unfolding on the night of November 13 last year. “Even though I’d left DLA Piper at that point, a former colleague who was in Paris called me and asked what I thought they should do,” she says.

“One of the biggest issues is in travel and duty of care. If you’ve got people travelling around you’ve got to know where they are. It’s no good having people caught up in an event and having no idea who is in a country, where they are and what they’re doing. Know where your travellers are going and make sure they know how to contact you in the event that something goes wrong.”

This is even more pertinent given the modus operandi of the so-called Daesh Islamic State or IS. Recent terrorist attacks have clearly demonstrated IS is targeting civilians and infrastructure with its primary aim to cause fear, disruption and panic.

“Traditionally, terrorism has been defined by attacks on property, resulting in significant business interruption,” says Scott Bolton, director of crisis management at Aon Risk Solutions. “However, the rise of IS has brought about an increase in the use of shootings versus bombings as well as the targeting of private citizens and public gatherings, as seen most recently in Brussels. This new environment means businesses need to reconsider their risk profiles to more effectively limit the impact of attacks on their people, operations and assets.

“We need to think more about how we limit the impact of an attack. For example, in an office tower, we can close off lift and stairwell access to the floors above, limiting the opportunity for terrorists to access additional targets.”

While the chances of being directly caught up in a terrorist attack remain low, businesses need to think about how they might respond if transportation systems or city centres shut down in the aftermath of an event. It took five weeks to reopen the departures hall at Brussels Airport following March’s deadly attacks.

“What we haven’t seen so far in IS activity is a direct and specific targeting of business and commercial interests,” says Mr Hecker. “We have seen attacks on public venues and government infrastructure, and these are important things to take into consideration when doing crisis management planning.

“I used to work in our Moscow office and expats would often say to me, ‘In the event there are tanks on the streets in Moscow, I’ve got an open-ended air ticket out of here’. I would respond asking what they would do if the roads to the airport were blocked. So depending on how a terrorist incident unfolds, there are lots of different things that would become difficult to do.”

Businesses can also find themselves caught in the crossfire of a terrorist incident. Certain types of organisation are going to be most vulnerable, such as shopping malls, transportation systems and stadiums where large numbers of people gather. “Trophy” buildings, stock exchanges and central business districts are also more prone to disruption. Spatial awareness is an important factor in risk assessment and response planning.

In the 15 years since 9/11, counterterrorism surveillance has improved considerably and the world has changed. Nevertheless, businesses should remain on alert, says Mr Hecker. “Attacks in Paris, Brussels, Jakarta, Beirut, Ankara and Istanbul show us that IS now has the capability to execute complex operations fairly far from its comfort zone. There has been a real internationalisation of what IS can do and that puts cities like London and countries like the UK on alert,” he says.

Other examples of geopolitical risk can be less impactful, but cause much longer-term uncertainty. The rapidly approaching EU referendum on June 23 is one example.

“Businesses cherish predictability and stability,” says Mr Hecker. “Whether the referendum is close or a landslide there has to be some sort of feeling that it is decisive and the issue has been resolved, as the prime minister says, for a generation. Otherwise this instability we’re feeling now could remain and I don’t think business will want or like that very much.”

Ms Graham thinks that while it is likely to be a slow burner, the prospect of a Brexit should be among the principal risks identified by the boards of public companies. “I don’t know how any listed company should not be preparing their businesses for this,” she says. “It’s not a subject for crisis management, because if something goes wrong it won’t happen overnight, but nevertheless you need to be prepared and look at different scenarios.”

Another, associated issue is Europe’s migrant crisis, which is a big factor behind the rise of European far-right political parties. However, alongside the potential risks there are also opportunities for organisations that have planned and responded appropriately. Many migrants, for instance, are highly skilled individuals and could enhance workforces in their adoptive European countries.