Breaking down stereotypes is elevating for diversity and inclusion at work, and can help women achieve in male-dominated roles 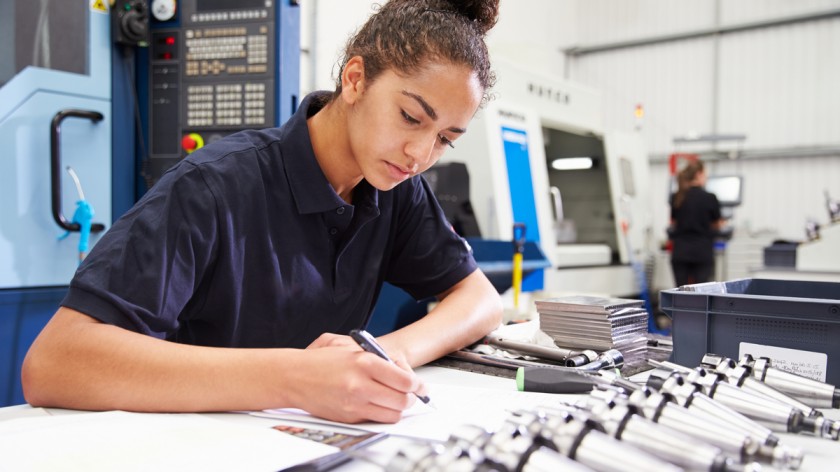 Diversity and inclusion are increasingly important for any company to grow and evolve with society, attract a broad pool of talent and improve its competitiveness.

Leonardo, an aerospace technology company, is no exception. The company has been adapting its approach to the issue over the years. Leonardo hired a head of diversity and inclusion in 2018 to tackle everything from wellbeing at work to making sure the firm raises its number of women employees from 17 to more than 30 per cent across the UK business by 2025.

A big part of Leonardo’s programme relates to recruitment, tapping into a diverse range of backgrounds and education, and allowing people to enter the workforce in non-traditional ways. This includes Leonardo’s modern apprentice scheme.

Jordanne Currie, who is now a STEM (science, technology, engineering and maths) ambassador for the company, decided to skip university and enter the apprenticeship scheme in August 2015 after hearing about it from a family member. She rotated into a different department every three months, from mechanical engineering to quality and testing, and currently works on the surveillance radar for the Norwegian Coast Guard’s AW101 all-weather search and rescue helicopter.

“I have a personal development plan that takes me to an engineering management role within five years, when I’ll be 27,” says Currie, from the company’s Edinburgh office. “I am also fortunate enough to be studying engineering with management at university one day a week. I may have started my degree later than some of my friends, but when I graduate I’ll already have a job and seven years of work experience under my belt.”

Leonardo pledges that women should make up at least 30 per cent of candidates sourced and shortlisted, as well as between 30 to 50 per cent when it comes to succession plans and promotion. The company is also setting up a bursary scheme, which aims for at least half the student intake to be women; this apprenticeship programme is dependent on candidates’ exam results.

The 2019 research carried out by Leonardo, which included engaging with more than 1,000 UK staff and a cross-sector working group, has not only helped the company understand the barriers to a more inclusive workplace and diverse workforce, but also to change the language used to attract new candidates.

The concept of what is inherently “male” and “female” comes with changing attitudes. Erin Mansell joined the firm in 2000, building gear boxes as an apprentice, and now manages the production line for the British Armed Forces’ AW159 Wildcat helicopters in Yeovil.

“From a young age, I was very practical with my hands, helping my dad on his wood-turning lathe. I was into non-traditional or presupposed ‘male’ toys such as Scalextric.

I loved LEGO and Meccano and still do,” she says. “I still get a real buzz when I see the Wildcat flying overhead and pointing the helicopter out to my children: my seven-year-old daughter can determine which helicopter is which now.”

As any company knows, diversity cannot be achieved overnight, especially for one of the largest defence contractors in the world with almost 200 sites worldwide. But Leonardo has come some way.

I have a personal development plan that takes me to an engineering management role within five years, when I’ll be 27

When Fiona Clark, operational electronic warfare capability lead, came to Leonardo as a graduate in the 1980s with a maths degree, she was one of two women in a class of 80. In the 1990s, the company introduced what she describes as a “fantastic” work-life balance policy, allowing her and her male colleagues to work part time and take care of their children.

“After university I had an interview at a bank. It went well, but they said, ‘We won’t offer you the job as in five years you’ll have left to have babies, so we won’t invest in you’. I’d love to go back to them now and say, ‘Look, I’ve been at Leonardo for 35 years’.”

Based in Luton, she runs internal courses for new and established staff at Leonardo, and appreciates the different points of view diversity of staff brings. She also does outreach in schools to demonstrate that engineering is not, as she calls it, “male, pale and stale”.

“When you go into schools and speak to 13 year olds, they often think engineering is fixing washing machines in overalls with dirty fingernails and they don’t see the exciting creativity of our industry. That is an outside perception we are trying to change.”