Why most energy companies have been getting digital transformation all wrong

“Companies often equate digital transformation with IT transformation,” says Dr Gianvito Lanzolla, professor of strategic leadership at Cass Business School. “That is a recipe for disaster.”

Chris Bingham, vice president for the oil, gas and utilities sector at Avanade Europe, a digital innovator formed in 2000 by industry giants Microsoft and Accenture, says: “When we look at what the market is saying, many people associate digital transformation with technology implementation. Yet when you look at best in class, those organisations also have a clear focus on transforming their employee experience as well as their business operations.”

Avanade, which works with many large oil, gas and utilities companies, including Centrica as well as smaller organisations such as Tullow Oil and Subsea 7, believes that to truly transform to be digital on the outside, they need to be digital on the inside. This means engaging employees and helping them improve their ways of working, leveraging their technology investments. And for good reason.

Research led by Dr Kristine Dery, a research scientist at MIT’s Center for Information Systems Research, says the top quartile of companies based on rating of employee experience enjoy twice the level of customer satisfaction and twice the level of innovation as other companies. As a result, these companies are 26 per cent more profitable, not just because of better customer satisfaction and innovation, but also because they are reducing their costs and identifying new streams of revenue.

While energy companies believe they are on track with digital transformation, across industry as a whole there is work to do.

A 2015 global survey from Avanade found that while 75 per cent of companies across all sectors understand the benefits of digital transformation, only 40 per cent have actually adopted such tools.

Paul Beaumont, modern workplace business lead at Avanade Europe, says things have moved on since the survey, but there is still more to do. “Many organisations still talk about digital transformation without recognising the need or opportunity to make meaningful business transformation,” he says.

“IT used to be the bottleneck on anything that needed to get done,” says Stuart Beeston, Centrica EM&T chief operations officer. “Since working with Avanade, we have a track record of meeting business needs. IT is now an asset that gives the business confidence to
explore opportunities.” 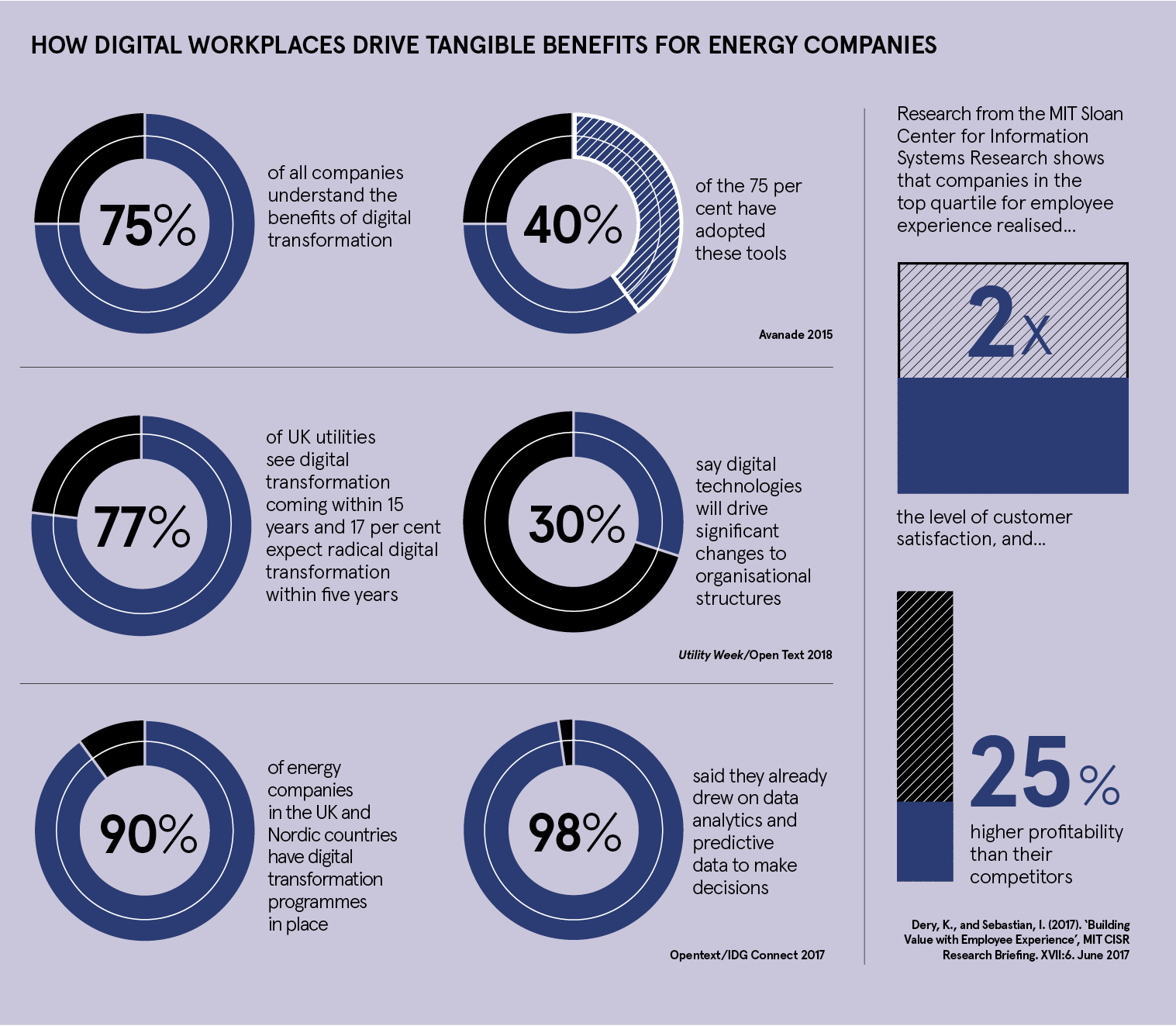 Building a successful digital workplace depends on having the right technology partners and Avanade has been awarded Microsoft’s number one systems integrator for 11 years in a row.

Stanley Louw, Avanade’s UK and Ireland head of digital innovation, shares an example of how this is working in practice. “We have been helping one company to manage when drill bits are breaking and using data to understand the best way to prevent or fix them,” he says.

While energy companies feel they have digital transformation under control, the picture in the utilities sector looks less developed.

Mr Corley agrees that utilities are ripe for transforming into digital workplaces. “In many utilities, we still see Windows 7 and XP, and there is an absence of unified communication and collaboration. That is a massive opportunity,” he says.

Avanade Europe’s Mr Bingham says: “Utilities have done things the same way for a very long time and they have thrown armies of people at problems rather than automation, and have made do with out-of-date IT. We are starting to see that turn.”

Mr Beaumont adds: “We have helped one of the world’s largest investor-owned electrical utilities invent a new operating model which no longer focuses just on the IT organisation. The model is based on constant change and evolution. It is also being driven by the business for the business; IT no longer has the sole responsibility for driving technology change.”

Making digital transformation less about technology and more about the business is going to be crucial for the survival of the energy and utilities sector in a challenge-strewn road to the future that includes climate change, the move away from fossil fuels to renewables, and a world of geopolitical tension and protectionism.

Avanade believe that to transform your organisation to meet this future, the real work needs to start at home.