More than $5 trillion is locked up in vast supply chains that deliver the products and services that enable our globalised economy to function.

Imagine what an innovative and modern business, small or large, could do if access to such a large pool of capital were available to it? The possibilities are endless: a new manufacturing plant, a global expansion plan or even something as simple as payroll and funding capital expenditure.

This is what that cash should be doing, but it can’t because it is locked up in unpaid invoices of companies all around the world, struggling with inefficient supply chains funded by cumbersome traditional banks.

Much of the cash is owed to small and medium-sized enterprises that, in the most extreme cases, may have to wait up to nine months to get paid. Sometimes they cannot hang on and are forced out of business through no fault of their own.

Greensill, the world’s leading provider of working capital finance, is changing this with a unique technology-driven approach that is helping to oil the wheels of the global economy and keeping supply chains all over the world running smoothly.

Supply chain finance (SCF) has been around for more than three decades and the market has grown by around 30 per cent in the past eight years. This increase is largely because technology-driven SCF programmes have become recognised as much more efficient and cost effective than other forms of finance such as taking on debt.

We are always looking ahead, asking ourselves how we can further revolutionise working capital finance

Today, however, big data and artificial intelligence are among new technological advancements disrupting traditional working finance models to produce ever faster, easier and more efficient ways of providing companies with the cash they need.

“There are going to be a bunch of very significant changes that take place over the next few years and the broader finance industry, frankly, isn’t really keeping up,” says Lex Greensill, founder and chief executive of Greensill. “Greensill is way ahead of the curve.”

Founded in 2011, Greensill is the world’s largest non-bank provider of working capital and has become one of the leading disruptors in SCF.

The London-based company has offices around the world and has extended $50 billion of financing to a pool of 1.7 million suppliers in 60 countries since inception. It also owns Greensill Bank, based in Germany, and runs a suite of SCF funds which together have more than $5 billion of assets under management.

Greensill’s mission is the democratisation of capital, making cash available to the smallest of firms on the same terms traditionally enjoyed by the biggest multinationals.

The firm works with some of the biggest and most complex organisations, with supply chains that include tens of thousands of companies, to devise unique and innovative working capital solutions. 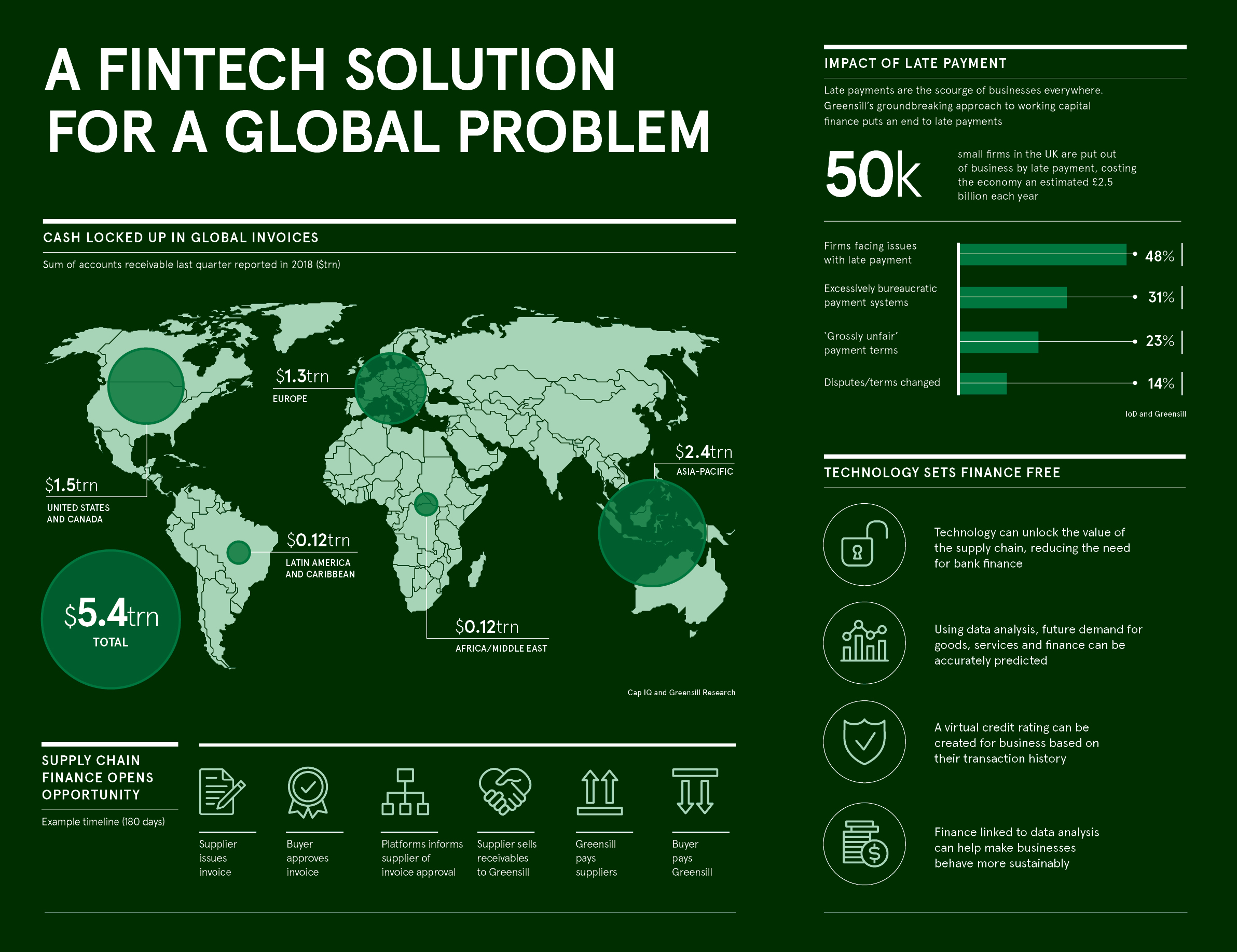 For example, Greensill has helped Boeing change the way aircraft purchases are financed without the need for traditional US and European export-import bank support. It has assisted telecommunications providers such as Vodafone in finding a cost-effective way of financing increasingly expensive mobile phone handsets for millions of consumers worldwide.

By reimagining mobile phone handset financing in Latin America, Greensill is putting smartphones in the hands of more people in remote regions who can now connect to the wider world on a scale not previously possible. In Australia, meanwhile, the company is working with its largest clients to devise a new means of providing finance for indigenous-owned suppliers in an effort to level the playing field and democratise capital further still.

Greensill also works with governments. It is the sole provider of SCF to the UK government through a £1-billion programme with the Crown Commercial Service. The government SCF scheme ensures prompt payment to high street pharmacies, which were being hampered by slow government payment mechanisms. North of the border, Greensill also devised a unique financing plan with the Scottish government to provide low-cost hydro-energy.

“We are always looking ahead, asking ourselves how we can further revolutionise working capital finance,” says Mr Greensill. “Every day we ask ourselves ‘how can we unlock that capital so our clients can put it to work?’ That’s what gets us out of bed in the morning.”

To that end Greensill has recently developed a data-driven version of its basic product.

As the suppliers that have provided invoices to Greensill over the past eight years automatically feed information into the firm’s systems, this trove of accumulated data has become a vital resource in providing an evermore efficient route to unlocking capital. The quantities of data are so large that the only way to analyse them and put them to the most effective use is with artificial intelligence and machine-learning.

“By constantly analysing this data, we get a real-time view of any company’s financial health an from this we can deduce risk with an unprecedented degree of accuracy,” Mr Greensill adds. 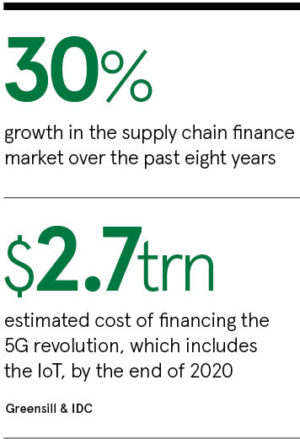 As the digital age gathers pace, the need for innovative solutions to the funding, development and manufacture of new products, and the evermore complex supply chains behind them, will become greater.

For example, the rollout of 5G connectivity over the next three years is expected to see the rise of autonomous machines and emergence of completely new industries connected to the much-heralded internet of things. Greensill forecasts show that the development of the so-called fourth industrial revolution will require upwards of $2.7 trillion by the end of 2020 alone.

It represents a huge challenge to the whole concept of SCF. Yet there is plenty of liquidity in financial markets, more than enough to fund a future of self-driving cars, robot surgery and all the other imagined applications that will rely on 5G technology.

Working capital finance will evolve to meet any challenge, using artificial intelligence and big data while tapping into financial markets. Modern technology is helping Greensill make cash available to a wider cross section of companies in a way that is more cost effective, faster and easier.

“We are in a technological arms race to provide access to an enormous global pool of capital,” Mr Greensill concludes. “Greensill is winning that race right now and through the hard work of our excellent people all over the world, we innovate every day to ensure we continue to unlock that capital so our clients can put it to work.”

Q&A: Greensill is changing finance to change the world

What is Greensill and what does it do?

We are a market-leading provider of working capital finance, unlocking cash so companies can put it to work. Greensill is all about the democratisation of capital, making working capital available to the smallest firms in the same way as the big banks offer it to the largest multinationals. We believe every company has the right to working capital as this oils the wheels of global business.

However, we are about much more than supply chain finance (SCF). Greensill uses the power of financial markets to unlock capital on terms that fit the requirements of our clients, from 20 days to 20 years and beyond.

Since inception in 2011, we have become one of the world’s largest providers of alternative working capital, specialising not just in SCF, but in providing bespoke finance solutions to companies internationally. The company is headquartered in London and has more than 290 specialists in New York, Chicago, Miami, Frankfurt, Bremen, Mexico City, Sydney, Johannesburg, Singapore and São Paulo.

Greensill is transforming finance so our clients can transform the future.

Greensill is all about the democratisation of capital... We believe every company has the right to working capital as this oils the wheels of global business

What is supply chain finance?

Essentially, supply chain finance, or SCF, enables any supplier, from small and medium-sized enterprises (SMEs) to large multinationals to get invoices paid instantly. To do this the supplier sells its invoices to a SCF provider as they are approved by the buyer. That allows the buyer to pay later and the supplier to secure its money earlier.

Imagine a person stuck in the desert dying of thirst. All he needs is water. We will deliver 99 bottles of water to that man right now, whereas the big banks would tell him: “You can have 100 bottles of water, but fill out these papers and we will get it to you in three to six months.” I think we all know what would happen to the man in the desert.

That’s the predicament many SMEs find themselves in today. If only they had access to cheap, safe and fast-working capital, their businesses would be much healthier, more profitable and less likely to go bust.

What does Greensill do differently?

Firstly, we are financially robust. We own our own bank, based in Germany, and we have SCF funds with a combined $5 billion under management. Most companies that operate in the fintech space or in SCF do not have that kind of underpinning. Then our model uses the capital markets to package up the invoices we acquire into bonds and sell them to investors. Our approach is simply better for our clients because it is faster, cheaper and easier to access. This flexibility enables them to fund their suppliers while maintaining healthy levels of working capital.

What is Greensill’s innovative approach to working capital finance?

Greensill’s expertise enables us to anticipate challenges and develop solutions as they occur. We anticipate problems and work with companies to provide different financing options.

We are always looking ahead, asking ourselves how we can further revolutionise SCF. We are doing that now using big data analytics.

Our innovative and technology-driven approach has enabled us to provide a diversity of products and solutions for our clients. For example, Greensill has recently enabled companies to finance more than $2 billion of acquisitions across multiple sectors.

We have assisted Boeing and Marsh develop an entirely new means of financing aircraft purchases and take advantage of a gap in the market left by the US and European export-import banks. Greensill also worked with long-time client Vodafone to unlock hundreds of millions of dollars to finance the purchase of mobile phone handsets.

What Greensill projects are changing finance to change the world?

With our new way of financing handsets, we are helping people in remote parts of Latin America to connect to the mobile economy in a way that was previously impossible.

We are also protecting vital front-line healthcare in the UK. High street pharmacies play an essential role in communities, but have been hampered by slow government payments. Greensill’s tech-driven £1-billion SCF programme with the Crown Commercial Service ensures prompt payment every time.

Meanwhile in Australia, we are working on a plan we hope will level the playing field for indigenous people in a competitive global landscape.

What is your partnership with General Atlantic?

Growth equity firm General Atlantic last year made a minority investment in Greensill, continuing its strategy of supporting companies that use technology to disrupt the financial system. The firm is our first institutional investor and invested $250 million, valuing Greensill at $1.64 billion. This gives us access to a wealth of expertise, both at General Atlantic and among its stable of portfolio companies, as well as opportunities to enter important markets such as China, India and Brazil. 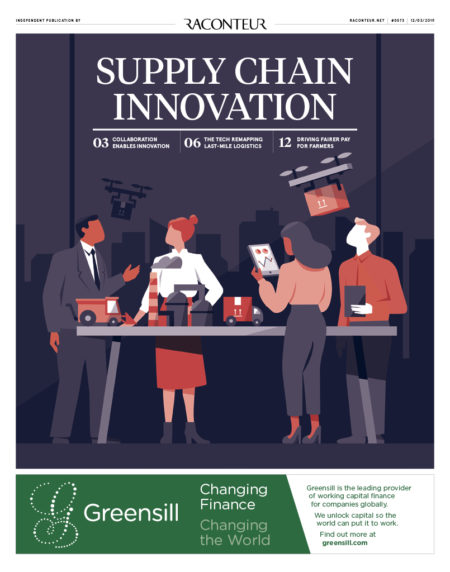