If the first step in achieving positive change is to acknowledge the true extent of the problem, then the transformation of the construction industry must start with a reality check 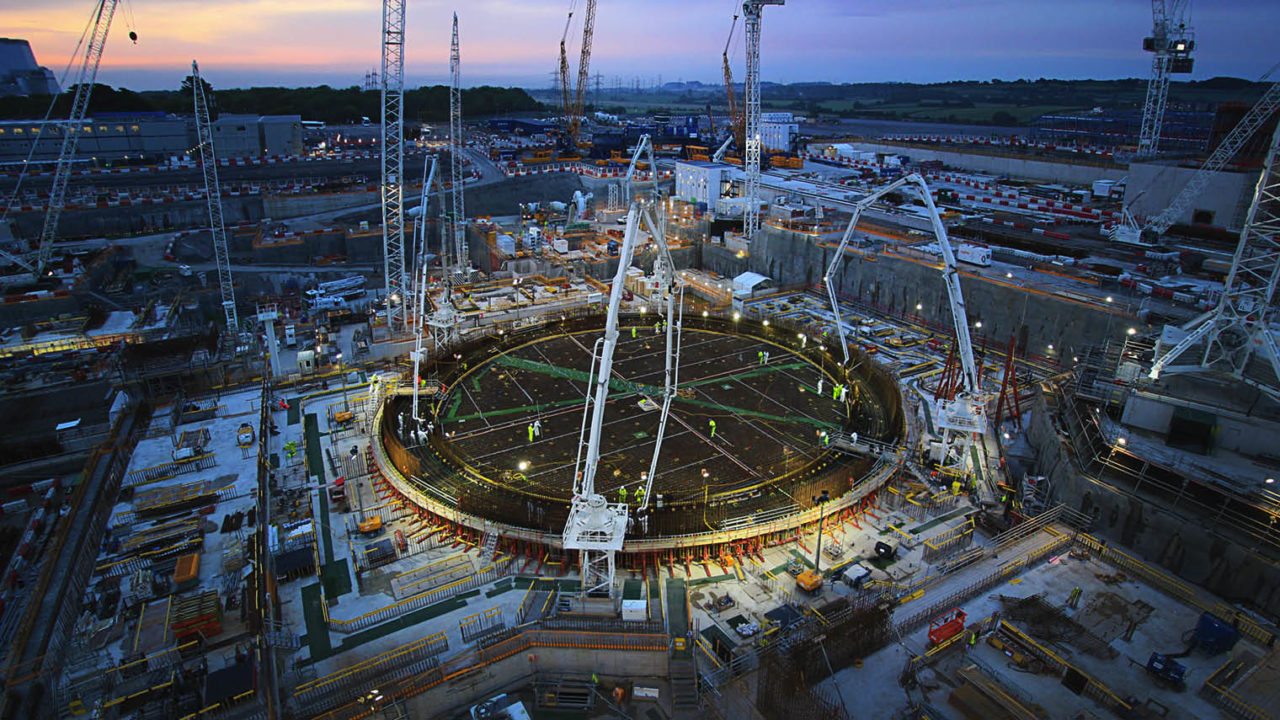 The situation in the construction industry is serious, if not critical, says Josh Murray, global director for human capital at Laing O’Rourke.

“For construction, and especially its supply chain, this is one of the most challenging times in the modern era. Established, prime contractors have proved vulnerable, with an unprecedented collapse of major employers across the European market,” he says.

The underlying problems are as much cultural as technological. Under its traditional, adversarial contracting model, the industry has typically tried to push as much risk as possible down the chain, so splitting responsibility between multiple players and holding all individually to account.

In the current climate, this approach is no longer fit for purpose. “In the UK, in particular, we are witnessing a quite dramatic market trend away from that competitive tender process. The upshot is a new and emergent, collaborative business model, founded on early engagement,” says Mr Murray.

For construction, and especially its supply chain, this is one of the most challenging times in the modern era

“These are the collaborative skills needing to be bred into the next generation in construction; old, outmoded, adversarial standpoints will not deliver the infrastructure of the future,” he says.

Effectively peeling back the hoarding wall, with tools such as artificial intelligence and augmented reality, provides clients with 20:20 vision on-site, but also calls for a mindset shift. Such a culture change cannot be expected to happen overnight, though, in an industry the size of construction, which employs more than three million people in the UK and contributes almost 10 per cent to the national economy. The revolution must be planned.

So, ten years ago, Laing O’Rourke demonstrated its commitment to off-site construction via design for manufacture and assembly (DfMA) by investing in Europe’s leading precast concrete facility, in Nottinghamshire, which is complemented by its mechanical and electrical manufacturing capability in the West Midlands. The firm has since spearheaded more than 340 DfMA-led projects and can now guarantee an off-site manufacturing mandate in-house on every one of its schemes.

Then, three years ago, Laing O’Rourke set itself the task of responding to the Industrial Strategy from the UK government, challenging construction to be on a productivity and technology benchmark with aviation and automotive engineering, by 2025. 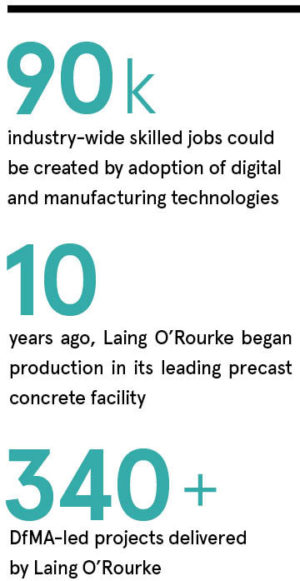 Next up is digital-twin technology. Mr Murray says: “We are not just building off the digital model; each physical component is actually in it, replacing the digital design element in the construction model. Straight off the production line, its progress is mapped and measured every step of the way.”

Core to this new integrated way of working is the availability and accessibility of digital data, which will drive procurement and standardisation of design plus, ultimately, delivery on-site.

Working with clients in the early engagement sphere gives them an understanding of the transparency benefits of digital data updated daily. The ability of Laing O’Rourke to translate money spent into progress on site and evidence certainty of delivery can help unlock new value streams for the client and fresh rounds of investment, potentially being held back by the concerns of funders about the industry’s ability to plan.

“People entering the industry now overwhelmingly need to have a digital-first mindset and the skills to match. We would still see the need for traditional skills in terms of tradespeople becoming technicians, but placed in high-value roles, not commoditised,” he says.

The first of a new generation of nuclear power stations to be built in the UK, Hinkley Point C is the epitome of
a modern megaproject, says technical director at Laing O’Rourke, Sarah Williamson.

“Any large infrastructure project is at risk of suffering cost and programme overruns, so a big part of the job has been working with the client for the best part of a decade to show how certainty can be built in, whether through DfMA, componentisation or digitisation,” she says.

The civil engineering works for this groundbreaking infrastructure scheme are being constructed in Somerset by the BYLOR joint-venture of Bouygues Travaux Publics and Laing O’Rourke.

For Dr Williamson, the project is about demonstrating that it is possible to do things differently and at scale. “This is not just a question of geometry, but the data that sits behind it. Everything is done to make sure when the thing hits the site and the cost in pounds per minute really matters, the client gets zero delay and maximum certainty: no surprises,” she says.

The client has absolute transparency, even sharing access to the project data tool, with all records in the same space. With every component and element modelled before going to site, the teams effectively have a kit of parts with which to construct the project in alignment with the four guiding principles of delivery: safety, quality, programme and cost.

People power is a gamechanger

Hinkley carries the promise of 25,000 employment opportunities plus secure, low-carbon energy for some six million homes. For us, it all starts with building the dedicated team required to deliver such a project, says Dr Williamson. “We need data engineers, coders, creative thinkers, systems and process-oriented specialists, along with the more traditional skills of on-site organisation, implementation and management,” she says.

“As a team, we need people who can both see the problem and solve it, rather than continue to operate in the same old ways the industry has done for the last 50 or 100 years.”

Competing in a tough marketplace for young talent, Hinkley is attracting valuable individuals from the likes of the gaming industry, applying their transferable skills to support infrastructure and real-world development goals.

Looking ahead, the gamechanger for construction will arguably not be technology, but people. Dr Williamson concludes: “I want the whole spectrum of skills. So, if as an industry, we can start to pull in that broad mix of people and attract a rich diversity of thought and thinker, then this might provide the perfect melting pot we need to get ideas really flowing and solve the complex challenges faced by our industry and society as a whole.”