Let’s talk about Gillette, an incredibly powerful brand built for a world in which incremental innovation around a “functional sell” was what it took to become a market leader.

Gillette launched with a razor that had two blades. The next year it innovated a superior razor with three blades. Then four. Then five. It made perfect sense as a strategy: the more blades the product had, the better it was and the more people would buy it.

Except that was the old world. One in which the brand owned the message, the barriers of entry were too great and the cost too high for disruption to be a significant threat. Companies could get away with treating customers as captives.

Then along came new technologies and Michael Dubin with Gillette’s cut-price competitor Dollar Shave Club. Dubin posted a video on YouTube and Facebook which told customers they had been duped: “Do you like spending $20 a month on brand-name razors? $19 goes to Roger Federer!” It was a smart, witty and cheap way of turning Gillette’s multi-million-dollar tennis star’s sponsorship back on them. Advantage, Dollar Shave Club.

Customers loved it. But here’s the kicker: they didn’t love it because the product was better. In fact, reviews suggested the blades weren’t quite as good. It turned out that a sizeable number of men didn’t actually want more blades; what they wanted was to avoid the experience of buying a razor in-store, when razors were kept in kiosks, guarded by assistants, behind the checkout. They also wanted to feel like they’d made a savvier financial decision and their dollars weren’t going directly into big business’s coffers as profit.

Dollar Shave Club simply felt more relevant to consumers and the numbers reflected that as Gillette’s market share dropped from 70 to 59 per cent. 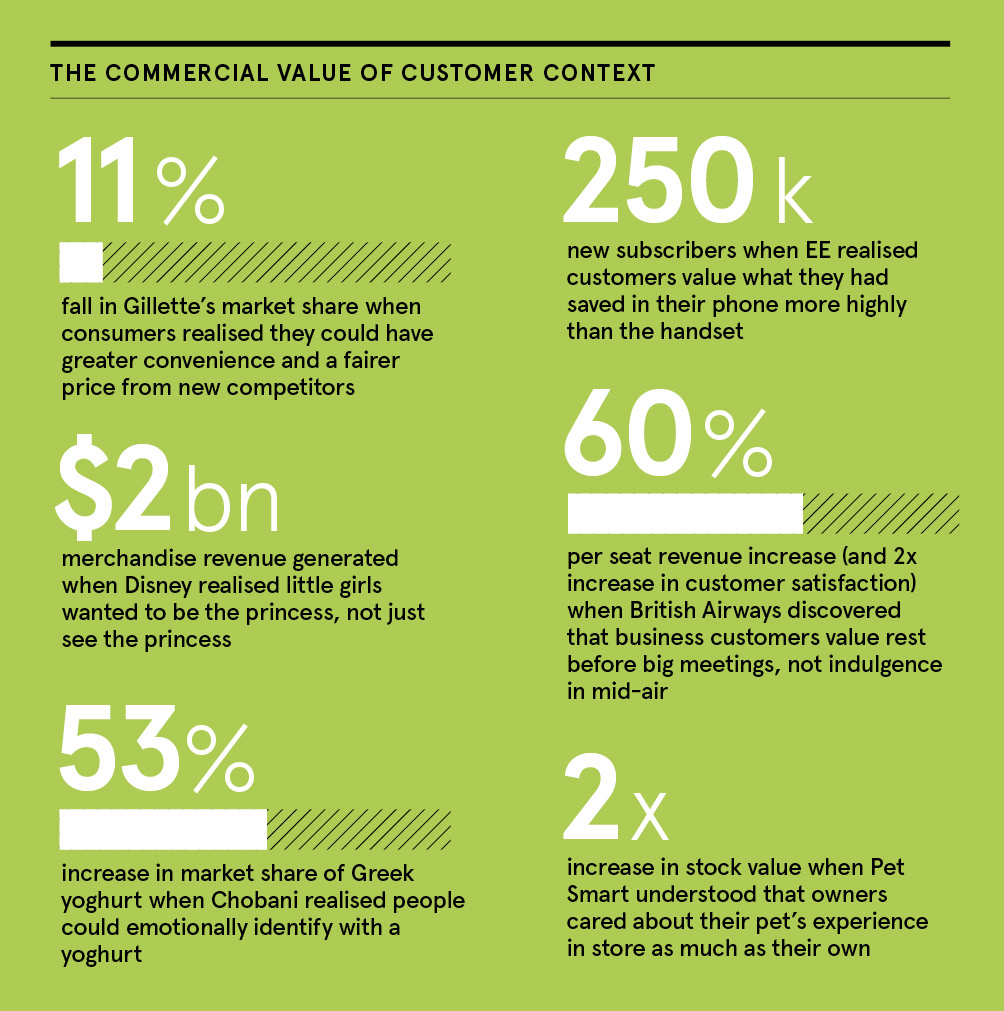 An era of choice

More than ten years later, we find ourselves in an era of hyper-dynamic competition when consumers have an almost limitless choice of products at their fingertips. For the world’s biggest brands, the question of how to create and maintain relevance is becoming more urgent. This is an era in which 90 of the top 100 US publicly listed consumer packaged goods brands are stagnating or in decline.

Choice is a powerful force and not always entirely rational. C Space data shows the reason customers choose one product over another is as much about the context and emotion the customer brings as the benefits the product offers.

As Dollar Shave Club proved, for a company to create an advantage within fiercely competitive market dynamics, it needs to “get” its customers, speak their language, know what they stand for, be frictionless to use, and make them feel smart and proud for their choices. That’s relevance and our data shows a company’s ability to get its customers has a direct correlation with business growth.

Business exists in such a data-rich environment, in which we know so much about customers, that developing and maintaining a strategic customer intuition should be easy.  But companies are still getting it wrong.

Consider Victoria’s Secret. Women will always need underwear and, moreover, such a large retailer has access to a lot of sales, loyalty and other data. Surely, it can’t fail? And yet it has just gone into receivership in the UK.

What went wrong? They missed their customer inflection point because, while sales data can show you there is a problem, it simply can’t tell you why the problem exists or give you the key to solving it. Sales and loyalty data alone couldn’t tell Victoria’s Secret that women’s view of their own sexuality has evolved. That in a post-#MeToo era, the kittenish, angelic version of womanhood offered by Victoria’s Secret felt irrelevant.

And now, as we slowly emerge from the coronavirus crisis, there’s another inflection point on the horizon. Because customers – people – have changed deeply as a result of this experience, it’s inevitable business will change as a result.

While some things will return to how they were, much will not. Unmet needs are emerging, right now. Anticipating the universal human truths that underpin them is the single most important perspective a company can grasp in its bid to stay relevant. But how?

Why business needs a “better why”

What we hear from chief marketing officers is they are almost drowning in a sea of data. Their data gives them a picture of what is happening; it shows sales are slowing, certain SKUs, or stock keeping units, are exceeding targets, footfall is high or that customers would recommend them.

But what they lack is an understanding of why these things are happening. While data literacy has exploded across every level of business, rapid customer intuition just hasn’t increased in step.

As businesses look to win in relevance – the big battle of our time – they need to push themselves further to identify a better why, a commonly held version of a customer truth that can unify the business and galvanise change.

While data literacy has exploded across every level of business, rapid customer intuition just hasn’t increased in step

They need a why that’s generated by gathering and synthesising all the available data and interrogating it in ways which reveal the emotion and context sitting beneath, the factors that can move the dial. A better why that contains a framework for understanding how emotional drivers of behaviour complement the functional and which matter most to your customers.

A better why is one that can be tested and validated at speed and scale. More than anything, a better why must contain a roadmap for the future to put you ahead of your customer in the battle for relevance.

This is a fast world and nothing is changing faster than your customer; this is both an opportunity and a risk. The path to relevance isn’t found in big data nor is it found in episodic feedback. True relevance co-exists with a strategic customer intuition, founded on a better why and building it can be your only agenda.

Want to get ahead of the next customer inflection point?

Join us to learn how at our ‘Better Why’ conference, with headline speakers including Wharton Business School professor and identity theorist Americus Reed II, and satirical cartoonist, The Marketoonist, who will both speak to the promise of a powerful customer / brand relationship and the gap that still exists in achieving one.

Laura Jones, global head of product marketing and customer engagement at Uber, says the ride-hailing and delivery app’s challenge, as it continues to grow and evolve, will be to stay ahead of customers’ needs.

“Our challenge will be to continue to delight and surprise people with new modes of transportation that deliver on our original value proposition of being fast, frictionless and delightful,” she says.

“Now the challenge is how do we keep doing that? Every product we bring to life needs to respond to that core value proposition of giving people time back and giving them energy back so they can focus on what really matters to them.

“As you know Uber started in rides, then we started to innovate into new areas like food delivery which is how we developed Uber Eats. The initial advantage we had was the fact that we had a huge base of drivers who were ready to not only drive people from point A to point B, but also pick up food and deliver it really quickly to our users.

“What’s interesting about this is that from a user standpoint is we’ve really come to represent convenience and the idea of not expending energy on things you don’t want to expend energy on, like transportation, like meal prep, and so what’s exciting as we think about the future is just how many directions this could take us.

“So how do we decide what to do next? What will keep us ahead of customers as their expectations evolve?

“Obviously, it’s incredibly powerful to have 100 million monthly active users around the world and be able to look at that data and understand how they’re behaving on the platform. But the truth is that’s a very limited picture because we’re only seeing behavioural data and the way they’re currently interacting.

“To get to true innovation, I think of it as a kind of triage exercise between the observed data we get from the app, as well as the deep ethnographic insight I think we and our partners in user research are uniquely well positioned to uncover.

“Then, as well, some traditional market research methodology, which I think can’t be cast aside, even in this era of big data, because it’s the intersection of all three of those sources that lead us to the most powerful and game-changing insights. The better why.

“And that’s where I think people look to marketing to say how do we reconcile this and what is the bigger picture? And that’s our superpower; taking that complexity and distilling it to a universal human truth, which can inform something that will stand the test of time, is actionable and can be used by the business.”

To get ahead of customer inflection points, insights professionals argue that the customer should be a C-level concern. Jane Frost, chief executive of MRS, the world’s oldest research association, says: “Financial and human capital have long been the cornerstones of business growth strategies.

“But just because insight is more difficult to measure, it doesn’t mean it is less important. In fact, in our world of ever-advancing technologies, research, insight and data analytics should be centre stage as they hold the key to untapped assets and long-term growth.

“In a fast-moving world, companies need to evolve faster than their customer bases and understanding customers – a part of what we call ‘Intelligence CapitalTM’ – enables this responsiveness, allowing businesses to harness what they already know and use it to drive business growth.”

Making sure that every employee understands the customer agenda matters too, and senior sponsorship is critical to landing this message. Estrella Lopez, EMEA HOI at General Mills, recalls:

“Two years ago, a new CEO came in to the business and started sending selfies to staff of him spending time with consumers. All of a sudden, everyone was being consumer first. It’s possible to agitate for the customer from the bottom. But if there’s no traction from the top, it’s going to be extremely hard.” 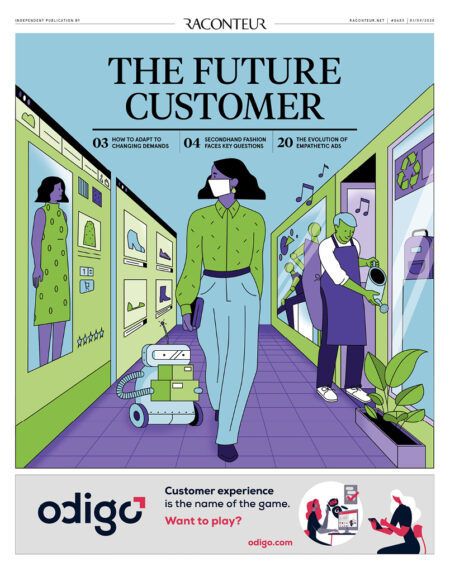