Seizing the moment in a bold new world for banking

Coronavirus has triggered a very different crisis than the global financial crash of 2007-8 and banks have found themselves playing a contrasting role. They have responded well in their own right, overcoming significant technical and operational barriers to maintain continuity of service to their customers through lockdown, including keeping branches accessible and contact centres going. But they have also been fundamental in facilitating the government’s emergency loan schemes and mortgage payment holidays.

Where banks will find common ground between the global financial crisis over a decade ago and the pandemic is in the inflexion point each one signalled in the need to overhaul their business model. Banks knew after the 2008 market crash that they had to rebuild their balance sheets and embrace technology to transform how they interact with consumers.

Having put the foundations in place since then, the pandemic now creates the imperative to accelerate their business model and digital transition.

“The pandemic has presented banks with an opportunity to be part of the solution and they have truly grasped it,” says Isabelle Jenkins, partner and UK banking leader at PwC. “They deserve credit for the role they’ve played and the speed with which they put in place the various government support mechanisms, providing crucial breathing space for customers and small businesses.”

“Their efforts should go a long way towards helping to further restore trust and the reputation of banks. That doesn’t, however, mean they’re not facing challenges.”

Given banks are much better capitalised than before the 2007-8 financial crash, they are well placed to cope with the immediate impact of this crisis in terms of impairments and falling revenues.

What the pandemic has done, however, is diminish any hope of an end to ultra-low base rates and even raises the prospect of negative rates. Low interest rates have placed a significant drag on their profit margins over the last decade, and the business model they’ve relied on – monetising the spread between what they pay on deposits versus what they charge for loans – is no longer viable.

Without substantial change, retail banks will struggle to deliver a return above their cost of capital. The required change will manifest itself in numerous ways. Banks will evolve their business model by seeking to diversify their income away from net interest income to generate more fee-based income, not only driving them into new areas, such as insurance, but also seeing them introduce more fees for existing products, particularly current accounts.

Banks will also seek to reduce their costs further and ramp up their digital transformations. This is likely to accelerate what has already been seen in recent years in terms of branch closures, job losses, more automation and the continued demise of cash and cheques. Customers will interact with their banks differently, characterised by an even greater shift to digital channels, such as video, mobile apps and live chatbots.

“The pandemic has crystallised the fact that the traditional retail banking business model in the UK just doesn’t work anymore,” says Simon Westcott, partner in PwC’s Strategy& practice. “Retail banks are now in a structurally low-margin industry. They need to accept that reality and look to operate and think in a different way.”

With margins low and growth prospects limited, economies of scale also become more important. A wave of consolidation is expected to undo much of the fragmentation that took place after the last financial crisis. This has already begun to be evident elsewhere in Europe, where regulators are taking more of an enabling than obstructing stance.

“As the business model strength of digital-only neobanks is put to the test, big banks will spot acquisition opportunities, and we are also likely to see mergers that deliver those economies of scale,” says Westcott. “Meanwhile, big banks need to consider the threat posed by Big Tech players, such as Google and Amazon, which have largely prospered through the pandemic and are now looking to play a greater role in financial services. The industry must prepare for a financial services world that includes Big Tech.”

Online banking usage grew by a fifth during lockdown, while mobile banking and video chat usage increased by 21 per cent and 19 per cent respectively, according to research by PwC, which also anticipates an acceleration in the shift to digital payments. In the next 18 months, cash payments will decline by 21 per cent, PwC predicts, offset by a 25 per cent uplift in mobile payments and 16 per cent in customers paying by an digital wallet.

Government and regulators have previously discouraged banks from closing branches, particularly to maintain a strong customer experience for elderly, rural or vulnerable customers who may struggle with the transition to digital. COVID-19 has the potential to change that.

Attending a branch is now a much less attractive proposition for anybody, not least vulnerable people who, as we enter winter, will potentially have to leave their homes in the cold weather to line up outside the bank, due to social distancing measures, and withdraw cash that has been widely handled. 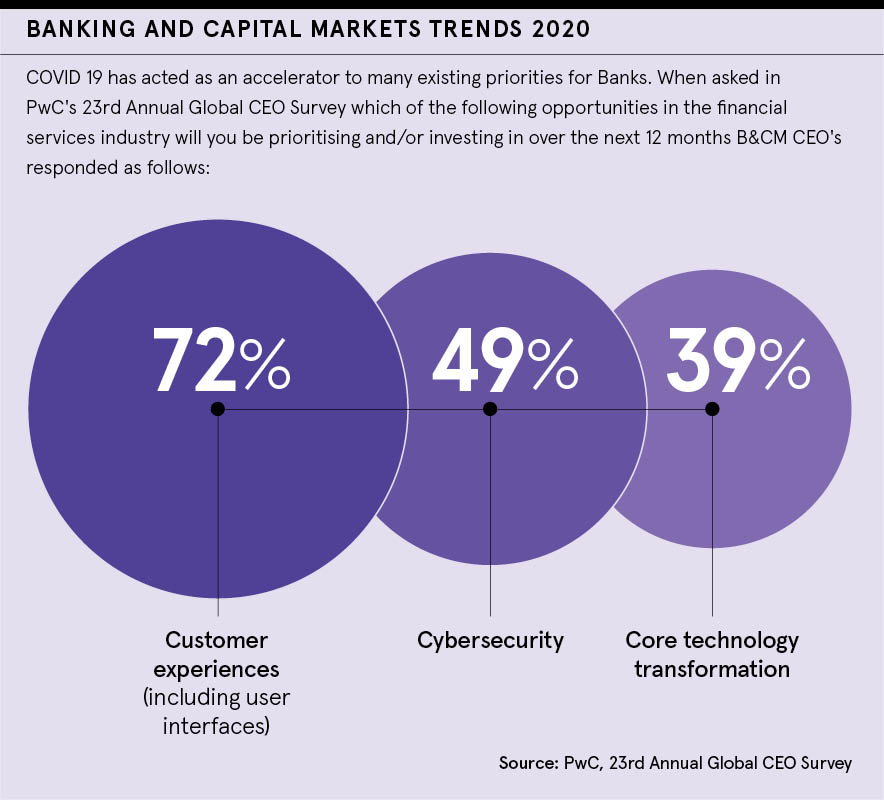 Such a customer experience is poor even before considering the risk of virus transmission, flipping on its head the notion that banks must not leave vulnerable customers behind by closing branches. The sheer necessity of the moment presents a window of opportunity for banks to accelerate the shift to digital platforms and channels at a time when people are most receptive and in need of these changes.

“Banks must seize the moment and go further and faster in their digital transformation than they might otherwise have been brave enough to do,” says Westcott. “They know they still need to have some person-to-person contact with consumers, particularly the vulnerable, but a much better customer experience would be providing a tablet, training customers on how to use it and broadcasting an agent into their home via video to carry out their banking services.

“If banks are slow to respond, and on the other side of the crisis things return to a previous status quo, they’ll have missed the chance.

“Meanwhile, rather than hinder banks in that transition, government and regulators need to support them and see the positives. Once customers get through the transition, which may be difficult for some, we can look forward to a much better and safer customer experience, and a more sustainable banking sector because its cost base has been right-sized for the economics of retail banking as it exists now and into the future.”