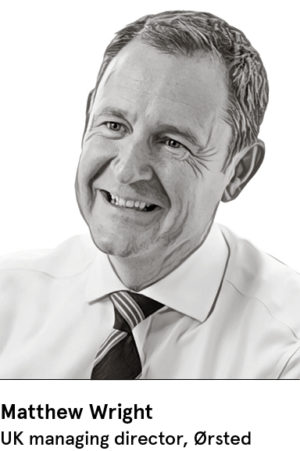 Why did Ørsted decide to switch from fossil fuels to wind?

It was partly strategic. It’s a classic business strategy to move out of an area of managed decline into an area with strong growth. So in 2017 we changed our name from DONG Energy, which stood for Danish Oil & Natural Gas, and announced we were moving completely from black to green energy. We sold our oil and gas interests. But it was more than that. Our chief executive Henrik Poulsen talks about the existential threat of climate change. So we are taking a moral and ethical stand.

Can offshore wind compete on cost with nuclear and coal?

It already does. Go back a few years and people might have had reasonable objections to offshore wind on cost. But recently, following power supply auctions in Northern Europe, the United States and Taiwan, we have seen proof that costs are tumbling. Take nuclear power. The new Hinkley C reactor will generate electricity at £92.50 per megawatt hour. The last offshore wind auction in the UK saw prices of £57.50 per megawatt hour.

How has offshore wind become so much more competitive?

Good old-fashioned economies of scale and the benefit of experience. The projects are getting bigger and so are the turbines. Back in 1991, the height of a turbine was about half the size of Big Ben. Our new turbines at Burbo Bank Extension are 195 metres tall and stand twice as high as Big Ben. Only two weeks ago we opened the world’s biggest offshore wind farm, Walney Extension, capable of powering almost 600,000 UK homes.

What about innovation in the sector?

There’s been innovation in every area. Take the foundations of a turbine. A lot of steel goes into maintaining them. We’ve worked with academics at Oxford University and other institutions to reduce the amount of steel, while maintaining the longevity and structural integrity in the foundations. We’ve made great progress. In maintenance, we’re changing our approach to projects located far from shore. Sailing ships out every day is inefficient when you’re travelling a long distance. So now we keep a custom designed vessel on site for two weeks. The way engineers get on to the turbine has changed too. Rather than getting on at the base and climbing a ladder, now there is a motion-compensated gangway; they just walk on to the platform. We are using drones to inspect turbines, which is safer, and we are now looking at remote operated vehicles (ROVs) subsea. And we are involved in battery storage projects, so electricity can be provided to the grid when needed. 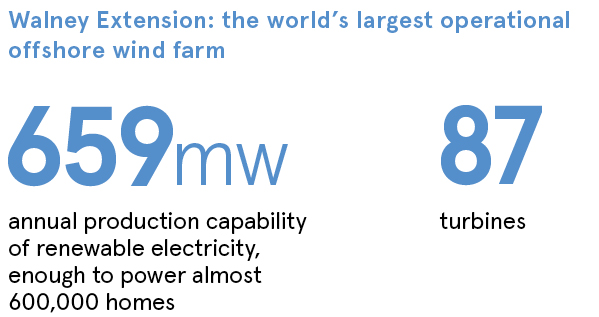 Will the UK economy benefit from offshore wind?

Absolutely. In many ways. Consumers and business will get cheaper power. We’ll work towards our climate change goals. And offshore wind is a strong and thriving industry in the UK. We are now able to source turbine blades from two UK factories, in Hull and the Isle of Wight, creating thousands of jobs. Offshore wind is also helping to regenerate coastal towns and cities, in areas where traditional industries are in decline. In Grimsby, for example, we are building the UK’s largest operations and maintenance hub, employing 250 people now, rising to around 400 in the next few years. By 2030 the aspiration is for 27,000 jobs in offshore wind overall. And there is the extended supply chain to think of. There is a ripple effect of contractors, from catering to fuel supplies, extending through the UK economy.

Exports are growing fast. Offshore wind is taking off in places like the Netherlands and Germany. Taiwan and South-East Asia are growing. India has put out a request for proposals, and the US and Canada are interested too. As the UK is a global leader in offshore wind, with a mature supply chain, we can export turbine components made in the UK to these markets. For other markets, there is a chance to export services. For example, a UK partner of ours, which searches the seabed for unexploded ordnance, is winning contracts in Asia and the US.

Is Ørsted investing outside offshore wind?

Energy storage, waste to energy and smart energy are all pieces of the jigsaw to create a world that runs entirely on green energy. We are excited about our Renescience technology, that converts household waste into energy. We use enzymic processes to liquefy the organic elements and turn it into green energy. Our Northwich Renescience plant will treat up to 120,000 tons of waste a year, equivalent to waste from 110,000 UK homes. It generates a baseload of 5 megawatts of electricity, and creates clean recyclable material that can be used to make new plastic and metal-based products. We are investing in battery storage innovation and have taken our first steps into commercial battery storage by building and operating a project near Liverpool. Our energy sales business is delivering energy as a service, helping businesses reduce consumption and save on costs.

How big can offshore wind be as a source of energy?

Enormous. A report last year produced by BVG Associates looked at the North Sea and Baltic Sea to provide power to the European Union. In their high-case scenario, there were enough developable sites to provide power to the EU 1.8 times over. There are a lot of sites with tremendous potential; ideally you need somewhere offshore that is shallow, but with high wind speeds. Our goal here is to generate 30 gigawatts by 2030. That equates to a third of UK energy consumption. The government is supportive and recently announced a fresh wave of auctions. Offshore wind can be the backbone of the UK energy system. It is already a mainstream technology. Our vision is to create a world that runs entirely on green energy and offshore wind is at the heart of that mission. 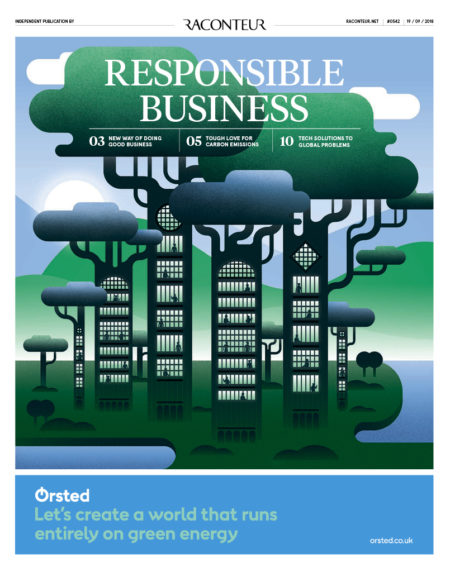