Rapid advancement of digital innovations and diversification of content platforms over the last decade have transformed advertising from a largely one-size-fits-all, mass-reach medium to one that allows brands to be much more tactical in their approach.

Most consumers spend much of their day looking at a screen or listening to music or other content, leaving eight in ten feeling overwhelmed by the number of ads they face, according to Marketing Drive. The resulting “ad fatigue” means many ignore untargeted advertising, making traditional forms of advertising much less effective. Now as many as seven in ten engage with personalised marketing messages, a study by SmartHQ found.

As audiences drift away from mass-media channels like broadcast television and towards more niche and tailored platforms such as streaming services, advertisers are being forced to be smarter with their marketing spend. Gone are the days when it was sensible to invest a £1-million TV campaign in one channel. The same money should now be spread across hundreds of channels and in hundreds of formats to secure the greatest return. 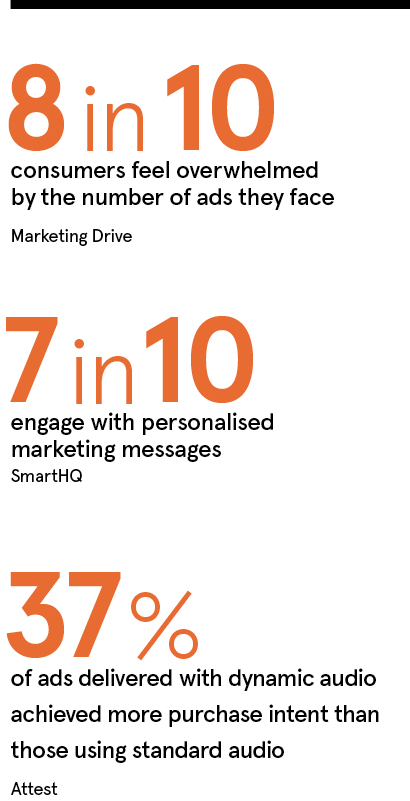 “With advances in programmatic, dynamic creative and the various ways of formatting ads for different platforms, the technology is there to enable you to do that efficiently,” says Steve Dunlop, founder and chief executive of A Million Ads, whose personalisation tools allow brands to engage people with tailored content at any moment. “As an advertiser, you can be much more tactical without having to get down into the weeds on every buy.

“An advertising exec famously said that most people ignore advertising because most advertising ignores people. Personalisation is a great technique to break through that. Human beings like to feel they’re having a conversation with someone they know and recognise because it makes them feel safe and comfortable. We naturally use data to shape our day-to-day conversations according to who we’re speaking to. Information personalises the way we interact. Why should it be any different with advertising?”

Data-driven personalisation combines with the power of audio to provide new opportunities in the digital age. Advertisers have long understood that it’s what people hear which gives the emotive reaction needed to engage them with the messaging of their ads. Personalisation provides further subconscious prompts of that kind, which means combining the two enables campaigns to perform better than traditional advertising.

A Million Ads reaches listeners across digital audio services, including music streaming, internet radio and podcasts, and combines advertisers’ messages with contextual user data to deliver dynamic ads that are more effective than traditional advertising. Each time a user hears an ad, the tool adds a personalisation layer based on contextual data. A visual editing tool allows creatives, studio managers and producers to build ads that can be tailored to the real-time data, with many having millions of permutations.

McDonald’s partnered with A Million Ads to drive awareness of McDelivery available on Uber Eats across the UK. The ads utilised real-time data including the time they were played as well as the weather, location and even whether the listener had heard the ad before to serve personalised, relevant ads that generated awareness and encouraged people to use McDelivery during different periods of day.

Ads delivered with dynamic audio achieved 37 per cent more purchase intent than those using standard audio, according to research conducted with Attest to test perception of the ad.

“This is a new creative approach; a new way of telling stories and talking to audiences,” says Dunlop. “The best advertising has data and personalisation at its heart. When a client really thinks about personalisation upfront, all their other messaging feeds from it. In an always-on world; if you know something about your users, why wouldn’t you use that in your conversation with them? If you walk into a room with someone you’ve known for years, you don’t act like it’s the first time you’ve met, so why do we expect advertisers to do that? That’s why personalisation should be on by default.”