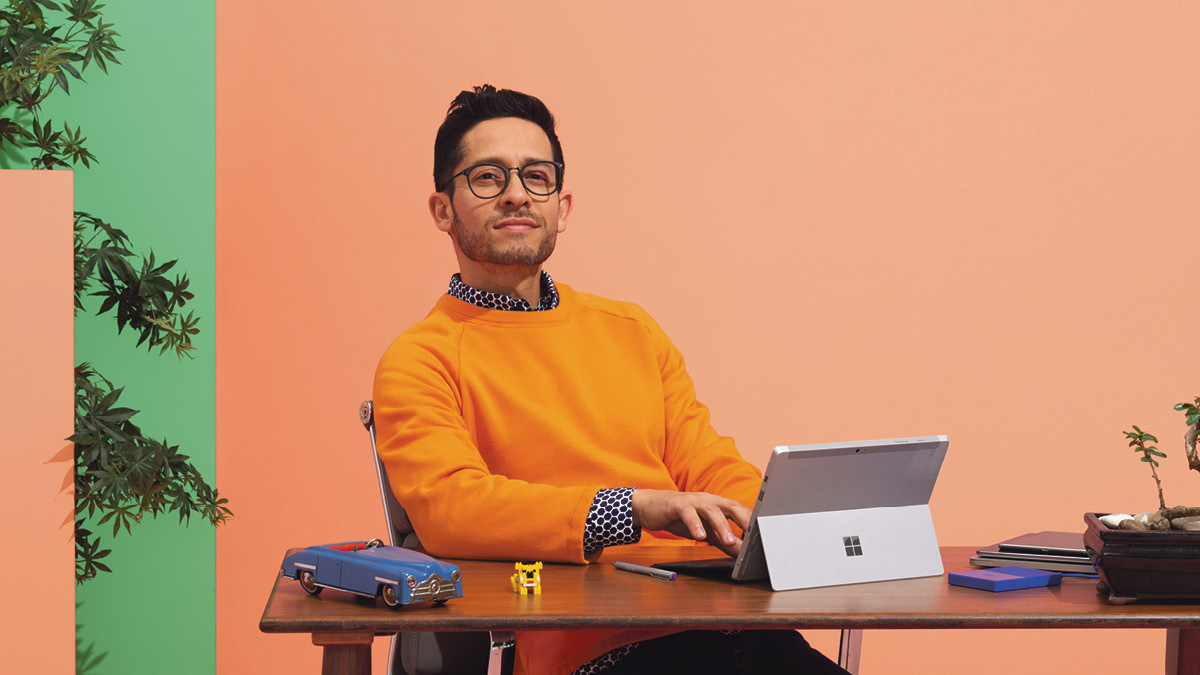 Digital transformation, already a significant theme for organisations across the globe, has been turbocharged by recent events. As the business community adjusts to a changed emphasis on remote working, many are recognising now is the time to use technology and enable fast, flexible and, critically, safe practices throughout the corporate world.

Key among these new practices is that of electronic signatures such as Adobe Sign. A technology that has often in the past been seen as a simple desire to save paper is now being recognised as having far greater benefits through its transformative effect on an organisation.

“Adobe Sign has allowed us to begin to think about how we strip back a wealth of form-filling and about the pertinent points of data we need to collect,” says Ian Bell, chief executive at the Police ICT Company, a membership organisation that supports UK police forces with technical insight. “There’s been an impact against the whole of the delivery cycle.”

The move away from “wet” signatures has been gathering force since the practice became accepted as legal in the UK two decades ago. The benefits are quantifiable in both time and money, according to the Total Economic Impact of Adobe Sign, a commissioned study conducted by Forrester Consulting on behalf of Adobe, which revealed an average of 1.5 hours are saved with every transaction. There is a 96 per cent reduction in cycle time from seven days to a mere two hours. Organisations also found it freed up the equivalent time of three full-time compliance employees who could move to higher value tasks.

The numbers quickly add up in organisations. Statement processing time in the police force has been reduced from four days to a matter of minutes. With up to 700 statements a month now completed via phone and Adobe Sign, an estimated 25,000 hours of officers’ time is saved every year.

Policing is being transformed by the National Digital Policing Strategy, launched in January and jointly authored by the Police ICT Company and the National Police Technology Council, and Adobe Sign is a part of that bigger picture. Speeding up the process of taking witness statements using the phone rather than in-person interviews has improved the quality of witness recall, giving the police a better chance of resolving crimes.

Forces are now innovating with Adobe Sign, looking to use the technology not only in witness statements but also in other paper-intensive processes such as firearm licensing applications, a 15-page form processed 55,000 times a year by the police.

According to the Forrester study, Adobe Sign often leads to a re-evaluation of workstreams: “some interviewees have simplified and consolidated documents… transforming them into templates or forms that reduces time spent on document preparation or contract generation.”

Time-savings have also been one of the biggest benefits at Rentokil Initial, a FTSE 100 company built on pest control and hygiene. Bringing in Adobe Sign cut contract turnaround times from a typical two to three weeks to an average of twelve minutes.

“It’s incredibly quick and productive for us,” says Daragh Fagan, Rentokil Initial group general counsel. “But it’s also a great pitch for the customer; we come across as professional and show we are easy to deal with.”

Funds came through in record time, with the process proving much quicker and easier as a result of having the right technology in place

The huge range of Rentokil customers, from an individual with a wasp nest in their garage to global food companies or hotel chains, necessitated a plug-and-play solution that worked well with existing technology.

“We already had online tools so customers can get all kinds of data about their service, but the contract element was a gap,” says Fagan. “When you sort that part as well, it’s both efficient for the customer and it delivers increased insight for us. It gives us a visibility and governance that we have found hard to achieve before.”

As a decentralised company with a high proportion of its workforce out on the road, Rentokil is already using technology in many of its processes. “We’re a very tech-savvy company and do a lot with digital tools. We use Google apps, artificial intelligence, connected bait boxes and other internet of things devices, award-winning online learning tools, but we were still printing paper contracts and couriering documents for someone to sign with a pen. It was antiquated,” says Fagan. “Once you’ve used Adobe Sign, you wonder why you did it any other way.”

One benefit that has been welcomed in the coronavirus crisis has been the increased ability to social distance, with businesses continuing to operate with a minimum of physical contact. But it has also proved useful when updating terms and conditions quickly and efficiently.

“We launched new disinfection services in more than 60 markets around the world, but needed to tweak the contracts to make sure that when our people turn up it’s a safe environment for them and our recommendations are followed. Updating contracts for thousands of customers has been very clunky and slow in the past, but this could be done by a simple click-and-sign process rather than some large-scale postal campaign,” says Fagan.

“So, yes, it’s just a signature, but then it’s changing how your business processes work and the scale of what you can do. It enables different ways of working.”

Rentokil quickly discovered the versatility of Adobe Sign and is now using it beyond contracts, for example to file annual accounts and complete board minutes. Adobe Sign was also invaluable when the company set up a commercial paper programme to apply for UK government funding. Funds came through in record time, with the process proving much quicker and easier as a result of having the right technology in place.

As the use of e-signature becomes commonplace, it is no longer an option to run your business without them

“Adobe Sign enables businesses to continue operating throughout a crisis,” says Mark Greenaway, director for digital media at Adobe, who points to the ease of use as a key reason for its adoption. The technology can be used on any device and, in most cases, training takes a matter of minutes. It can be used whether staff are at home, on the move or in the office. “It can be deployed quickly without changing processes, but can then develop those processes. Customers are consistently surprised by the benefits they can achieve,” says Greenaway.

Digital has been the norm long enough to provide evidence of its benefits. A research report published last year by Aberdeen found 39 per cent of leading sales organisations used e-signature, compared to only 21 per cent of others. Other digital metrics showed similar differences. When it came to business intelligence and sales analytics, the comparison was 39 per cent against 27 per cent, and for machine-learning it was 20 per cent against 12 per cent.

The report was clear that seamless touchpoints are critical in improving the customer experience. “E-signature is not a luxury; it’s a necessary part of the typical buying experience that all savvy sales teams should be leveraging,” it concludes. “E-signature is only one piece of the digital buying landscape, but it’s a piece that makes the whole greater from being added to the sum of all parts.” 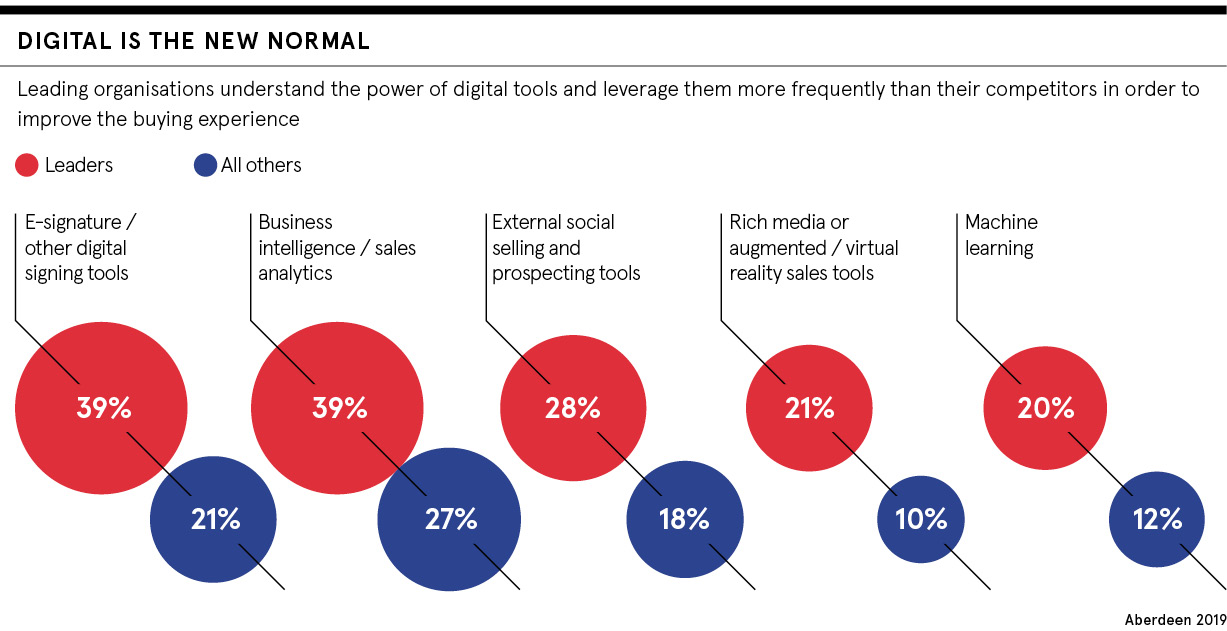 Time and again, customers from a wide range of sectors find e-signature has unexpected, but very valuable, side effects. Documents can be exchanged far more securely, but still at speed with a digital certificate. For life sciences companies, for example, where regulation and standards are critically important, securing the integrity of clinical trial documents is vital. In consumer banking, the speed with which lending agreements can be signed not only significantly improves the customer experience, eliminating one of the consumer’s biggest gripes and improving their perception of the industry, but also increases the speed with which the funds arrive in the customer’s bank account.

“Companies are becoming much more receptive to this capability and adoption is moving very quickly,” says Greenaway.

From delighting the customer with a seamless experience to delighting the chief financial officer with reduced costs, from enabling a faster and more flexible agreement to securing an audit trail and more accessible documents in storage, from freeing up staff to concentrate on more valuable tasks to making it easy to build new workflows, e-signature will transform and future-proof your business. As the use of e-signature becomes commonplace, it is no longer an option to run your business without them.

To get your free trial of Adobe Sign, please visit www.adobe.com/go/raconteur