Smartphone users will soon be able to enjoy a near-instantaneous browsing and streaming experience in the palm of their hand as Three prepares to extend what will be the UK’s fastest and only “true” 5G mobile network later this month. Three’s new 5G services, which use twice the amount of spectrum than any other UK network, will give consumers unprecedented speeds, including the ability to download a 4K movie in just seconds.

Three has acquired 140MHz of 5G spectrum, 100MHz of which is contiguous, making it the UK’s only operator able to offer a full bandwidth 5G network, according to the global standards body on 5G technology. Its closest UK rival has just 50MHz of contiguous 5G spectrum, which means Three will be providing peak 5G speeds that are twice as fast as any other operator across the country in this fifth generation of internet connectivity.

Latency, the time it takes for a mobile network to respond to a request, will reduce drastically from 4G averages of 40 to 50 milliseconds to as low as just 1 millisecond with 5G. This will have a transformational effect on business, gaming and society. By providing connectivity for the internet of things (IoT), 5G will facilitate rapid advances in driverless cars, healthcare, robotics and artificial intelligence, with endless opportunities for new innovation as well as simple enhancements in day-to-day life.

5G will also enable mobile networks to offer high-speed internet access in dense urban areas, something that is difficult to achieve on 4G networks. For example, as part of its shirt sponsorship agreement with Chelsea Football Club, Three UK has committed to enabling Stamford Bridge with 5G access from the 2020-21 Premier League season, improving the match-going experience for supporters.

“5G is a game-changing technology,” says David Dyson, chief executive at Three UK, the nation’s challenger mobile network. “The switch from 3G to 4G was evolutionary, but 5G is a revolutionary technology. Spectrum is the lifeblood of the mobile industry and we hold almost three times as much as our nearest competitor. Whether they are using it for faster downloads on the go, a faster home broadband network or for IoT connectivity, consumers and businesses can be assured that Three will ultimately be delivering the fastest 5G network in the UK with speeds far in excess of anyone else.”

Many customers have already been enjoying Three’s 5G since August, when the operator officially switched on its new network with the launch of its 5G wireless home broadband service. 5G home broadband delivers fibre-like speed, with Three customers receiving peak speeds of 1Gbps and average speeds of 221Mbps, significantly above the national average.

However, it is also much quicker to deploy, with no need for long-term contracts, engineer visits or drilling through walls and can be almost 50 per cent cheaper, Ovum research has found. Customers simply plug the broadband box into the wall and they’re connected. With Three’s 5G spectrum and new network technology, the amount of traffic it can carry on its network will increase by 28 times in the coming years.

During 2020, Three will be expanding its 5G network across the UK, which means many UK towns and cities can benefit from enhanced mobile and home broadband services. The backbone to these unrivalled 5G services will be a super-high-capacity dark-fibre network connecting 20 local core edge datacentres to its mobile masts. The datacentres are highly secure and energy efficient, and feature the world’s first cloud-native core network that is fully integrated, 5G ready and will enable the fastest possible experience.

Cloud networks are more efficient and reliable than legacy systems and can handle more data, which is crucial given that Three’s customers already use more than three-and-a-half times the industry average of data. Legacy datacentres are typically outdated, inefficient and unable to support the huge scalability needed for 5G. Hosting the UK’s first mobile network core in the cloud, supported by next-generation datacentres, will improve reliability and resilience while accelerating the rollout of any new features.

Three’s initial aim is to get 5G on 40 per cent of its busiest sites, carrying 80 per cent of its traffic, by the end of 2021. To enable this it is deploying new RAN (radio access network) technology, which consists of the masts and base-station equipment that links mobile traffic to its core network. The new technology, and an evolved backhaul solution, brings Three’s transport network closer to users, improving speed, coverage and overall performance.

“5G requires more than just putting spectrum and 5G antennas on to mast sites,” says Dyson. “To deliver the speeds and latency that digital Britain needs, we are spending millions of pounds every day to transform our entire network end to end. We are using cutting-edge technology in our fibre network, datacentres and the world’s first fully cloud-based core network to deliver a cutting-edge service.”

5G is set to revolutionise the world of gaming. Last September, Three announced a new partnership with Activision, a leading video game publisher, that will see its ultra-fast 5G network deliver an optimum online experience for one of the world’s most popular games, Call of Duty: Modern Warfare. In a game where split-second decisions are the difference between winning or losing, 5G’s mega-low latency is hugely valuable.

A 5G connection is a step-change in what people have been accustomed to from a mobile connection, and it paves the way for a whole new level of gaming and live streaming without the pain of lagging, freezing or dull loading bars. Gamers using Three’s 5G home broadband get plug-and-play access to a seamless online experience and super-smooth gameplay. Whether playing on a console or PC, they can enjoy vastly improved speeds compared to what they’re used to with a fixed broadband connection; UK average fixed broadband speed was 54.2Mbps, according to Ofcom in May 2019.

The partnership cemented Three’s continued expansion of its 5G home broadband service and further showcased its long-term commitment to enhancing the gaming and home entertainment experience for customers across the UK. For £30 a month, customers receive truly unlimited data, so they can play, stream, download and connect all their devices and apps without any restrictions or worries about hidden charges.

“Ultra-fast speeds are a priority for seamless streaming of entertainment, especially gaming,” says Shadi Halliwell, chief marketing officer at Three. “Three is delivering a 5G experience that can’t be beaten, making us the natural choice for one of the world’s leading games’ publishers. The combination of our superior 5G network, which comes at no extra cost, our truly unlimited data plan and this fantastic partnership with Activision, means gamers can play the world’s most popular game
without boundaries.”

Lee Godfrey, Call of Duty UK senior brand manager at Activision, adds: “We’re excited to be partnering with Three, whose commitment to delivering the best player experience through its ultra-fast 5G network is a perfect match for Call of Duty: Modern Warfare.”

The rollout of Three’s 5G network will not only benefit consumers, but also businesses across the UK. Recent research from Barclays predicted 5G could boost UK business revenues by up to £15.7 billion by 2025 and the barriers for adoption are so low that companies of any size can take advantage of the benefits. By 2030, the estimated increase in revenues could be up to £89.6 billion and the overall size of the UK economy could be boosted by up to 1.54 per cent compared to an economy with no national 5G network.

Crucially, 5G has the capacity to connect cities, homes, factories and devices in ways that have never previously been possible, allowing the UK to lead the way in technologies such as machine-learning and the fourth industrial revolution. 5G will also boost worker productivity and collaboration, and help people with accessibility challenges get back into work. This could be particularly impactful given the UK’s ageing population. 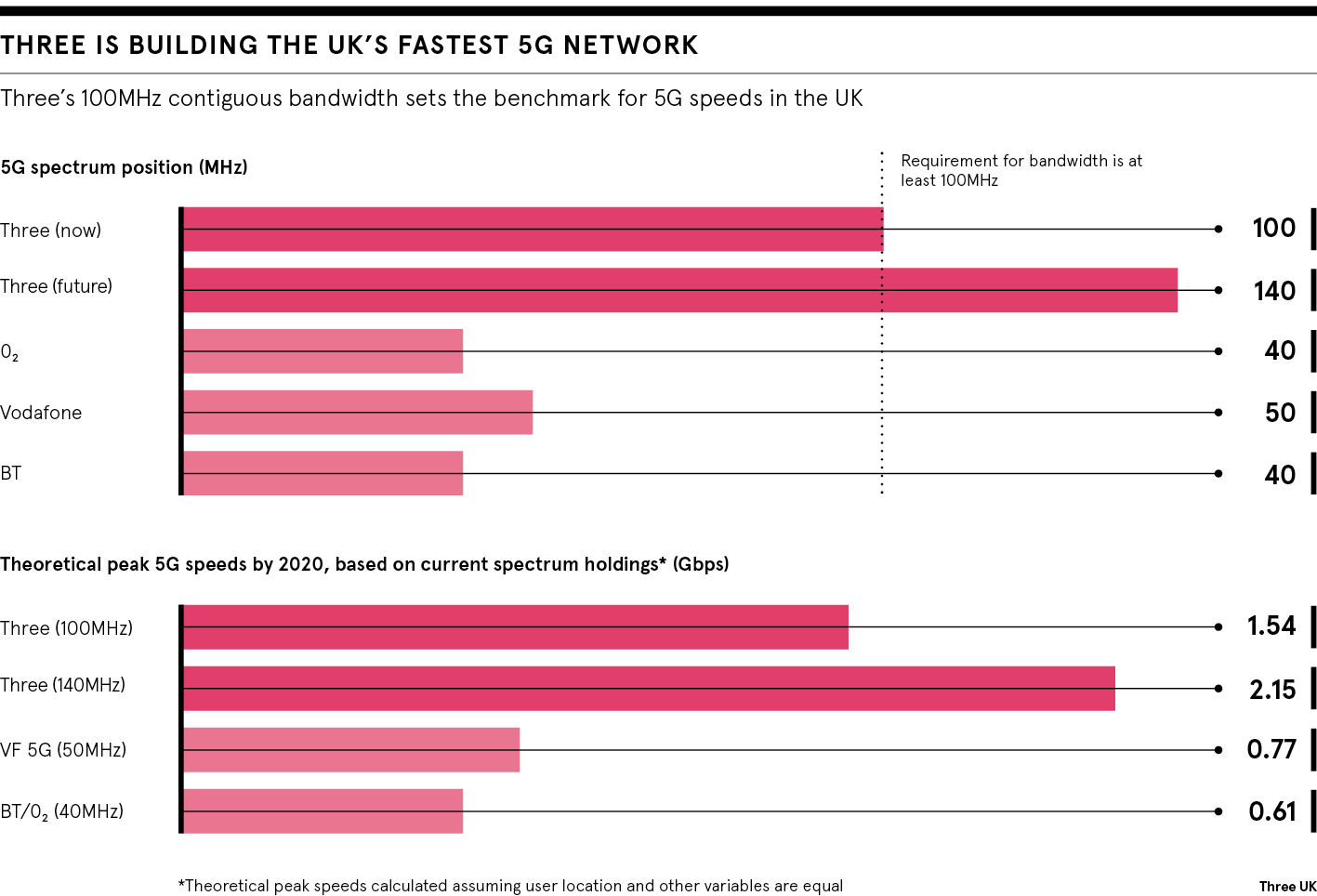 By offering near-immediate connectivity and unprecedented broadband speeds, new businesses will be able to get up and running and on a level footing with established rivals faster than ever before. 5G will also vastly improve the performance of video-calling services as well as office and productivity applications, including on mobile, allowing businesses of all sizes to be global and really embrace flexible working.

Meanwhile, connectivity improvements in speed, latency and capacity will accelerate industrial digitalisation and the resulting cost-efficiencies. A new generation of communications will develop to offer richer, mobile digital experiences for both businesses and consumers, and 5G-based location-tracking will also enable better precision for fleet management, semi-autonomous vehicles and warehouse efficiency.

“5G allows Three to revolutionise what a mobile service can offer to businesses,” says Dyson. “While IoT technology and its applications are evolving for enterprise, it is clear significant opportunities to improve efficiency and launch exciting new services will materialise in the not-to-distant future.”

Through its existing creative partnership with renowned arts college, Central Saint Martins, Three’s superior 100MHz of 5G spectrum will be showcased through a series of revolutionary fashion firsts. Building on its partnership from last year, when the first 5G augmented reality fashion show was revealed, Three’s super-fast 5G will transform the catwalk into a truly immersive digital experience during London Fashion Week, culminating in Adwoa Aboah walking the catwalk virtually. This will be a unique nod to the future when models will be able to walk multiple shows during fashion seasons all over the world, thanks to 5G.