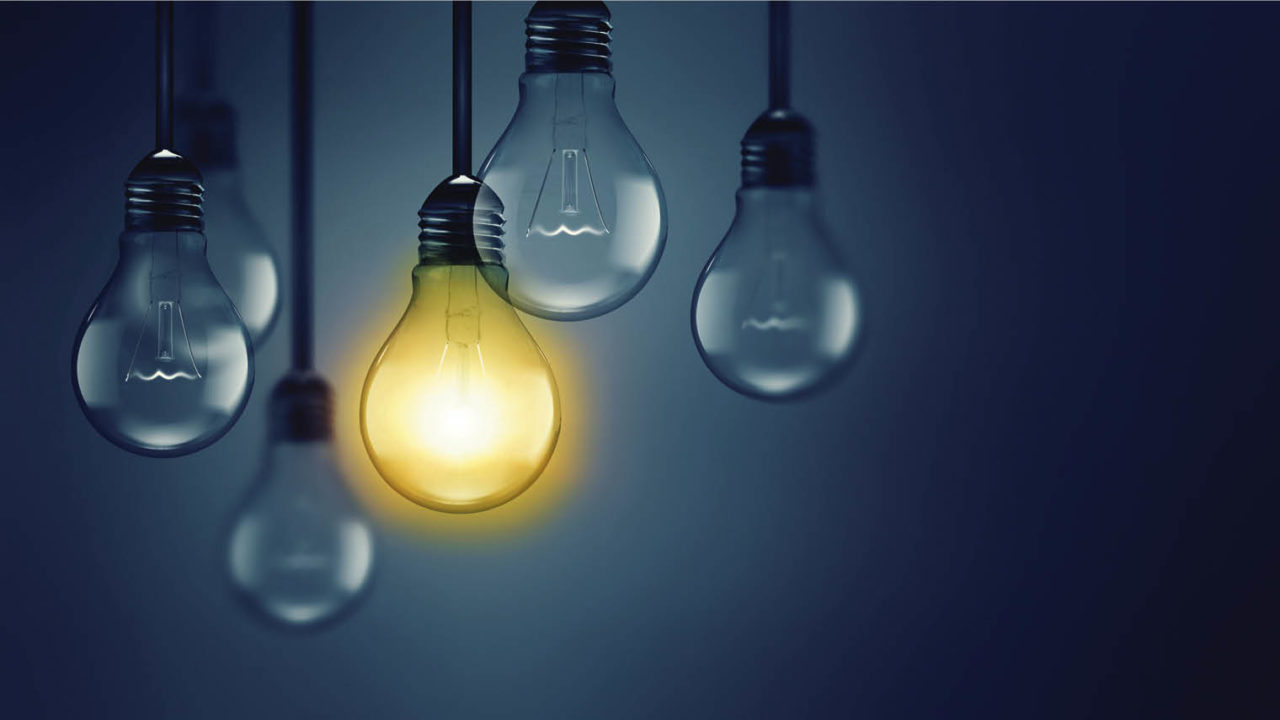 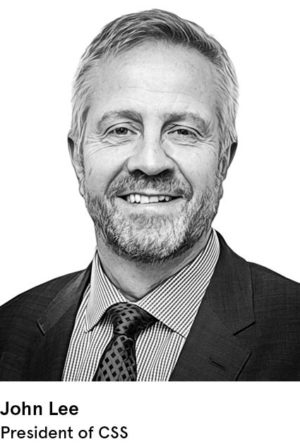 We are drowning in information, while starving for wisdom,” observed the esteemed biologist Edward Osborne Wilson. He predicted a future in which the world would be run by “synthesisers”: “people able to put together the right information at the right time, think critically about it and make important choices wisely”.

Wilson’s reflections are apposite for the regulatory compliance challenge facing the financial services industry. Here the challenge is to make sense of the unstructured data that is the source material for regulatory reporting. What has been less clear is who exactly will step up and play the pivotal role of Wilson’s synthesisers, aggregating and standardising the right sets of data to comply with each piece of regulation.

From fintech to regtech

The search for leadership has seen governments as far apart as Singapore, Hong Kong, Ireland and the UK promote a financial technology, or fintech, agenda with a spotlight on regulation, known as regtech. As far back as 2015, then-chancellor George Osborne used his Budget speech to outline government support of the fintech sector, calling upon the UK’s Financial Conduct Authority to work with the Prudential Regulation Authority to “identify ways to support the adoption of new technologies to facilitate the delivery of regulatory requirements”.

It was against this backdrop in late-2015 that two seasoned executives teamed with private equity to first identify and then bring together leaders in the field of “disruptive” regulatory technology to create a global regtech platform. Up to this point the approach had, of necessity, been less joined up with financial services firms obliged to source regulatory solutions piece by piece from a collection of opportunistic fintech startups that had emerged in the aftermath of the financial crisis.

The goal was to create a single, well-capitalised platform with a global footprint that offered a broad set of software-as-a-service-based solutions to meet demand for compliance with a growing raft of mandatory regulations. A year-long search and evaluation led to the rollout of Compliance Solutions Strategies (CSS) in January 2017.

The timing could not have been better. Surveys that track annual trends in measuring the impact of regtech on the role and remit of compliance within financial services firms point to steadily increasing demand. In its most recent survey, Thomson Reuters shows that the adoption of regtech solutions among financial services firms almost doubled in 2017 to 30 per cent of respondents, compared with 17 per cent the previous year. Demand continues to grow. Approaching three quarters of those polled indicated that the successful deployment of regtech solutions increased the efficiency and effectiveness of compliance.

A key factor in a coherent approach to compliance is ensuring that regulatory reporting and data management are not treated as separate functions. “The relationship between data management and regulatory reporting needs to be co-ordinated,” says Ronan Brennan, chief product officer at CSS. “Otherwise you end up with multiple vendors interrogating the same data sources, demanding technical integration resources and requiring assistance from data analysts. In essence, it’s an inefficient mess of data flows, exception management cycles and expensive resources tied up in repeated work.”

John Lee, president of CSS, agrees. Clients really need data management and regulatory reporting to be provided in an integrated manner, he says. “While adoption of a robust reporting solution is often the demand driver, any report you submit to the regulator is only as good as the information you use to populate it and ultimately that is what you will be judged on,” says Mr Lee.

He insists that data integrity is key to the quality of reporting. “You often find that the most economic and efficient way to undertake mandatory reporting across a raft of regulations is to repurpose data that has already been validated on your behalf,” he says. “If, for example, you’re doing client reporting, some of the data in your client reports could be repurposed for your regulatory reporting.” In addition, Mr Lee notes, there is often overlap between regulations, where the same data considerations apply. 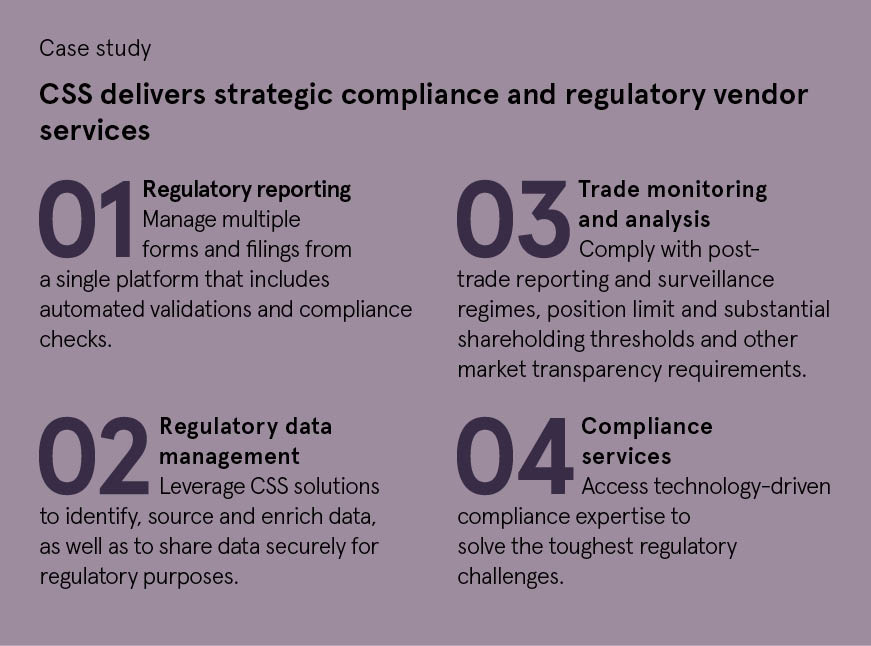 From the regulator’s perspective, a key concern in the whole process is what has become known as vendor risk. “Regulators are saying, ‘You need to ensure that the vendors you engage are here for the long haul and that they are provisioned and organised in an efficient and highly available state’,” Mr Brennan comments.

Beyond the operational vulnerabilities, he says industry purchasing habits often work against optimisation. “Regulations are coming through in waves, but for each new wave, the tendency is to go back to the market,” says Mr Brennan. “Firms don’t automatically use the same vendor for MiFID II and for SFTR, for example. What’s needed is a strategic rather than a tactical approach to compliance.”

Mr Lee adds: “Vendor risk is top of mind for regulators, concerned as they are about single points of failure. There are inherent dangers in adopting regulatory compliance solutions in isolation.” Why? Because such an approach makes a single point of failure more likely. “There are a lot of single or dual-product vendors that are de facto the weakest link in your compliance architecture,” says Mr Lee.

The private equity backing that underpins CSS enables it to invest in building out its global platform, while establishing synergies between different solution sets and broadening the markets it covers. “The single vendor offers a tactical solution,” says Mr Lee. “We’re offering a strategic partnership that helps a client identify where it is weakest in delivering on its compliance requirements and enabling it to strengthen those aspects of its approach.”

He describes CSS as providing three integrally linked business channels. One includes regulatory reporting, and regulatory data management and distribution. “This represents an axis of products that ensures your reporting and related data input is of the highest order,” Mr Lee explains. “The second channel is what we call trade compliance monitoring, reporting and analytics, and that includes best execution, trade and transaction reporting, inter alia. Channel three is compliance services, where our knowledge base comes into play.”

Mr Brennan adds: “There are firms that have a purely technology approach to regulation. A comprehensive solution, however, requires investment in knowledge, as well as technology and process.”