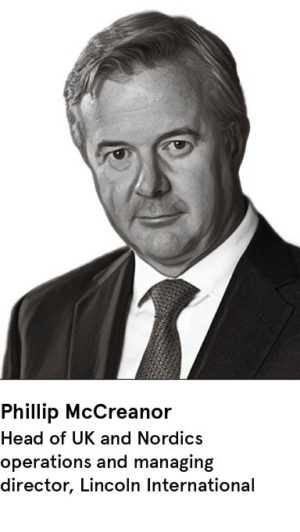 As the deadline for the UK to leave the European Union edges ever closer, it is perhaps surprising that the mergers and acquisitions (M&A) market is not only bearing up, but thriving.

According to the recent Mergermarket Trend Report, the first half of 2018 was 48 per cent higher in UK M&A transaction value than the same period a year ago, at £109.7 billion, while the second quarter was the strongest since 2015.

There are a number of reasons for this, says Phillip McCreanor, head of UK and Nordics operations and a managing director of investment banking advisory firm, Lincoln International. One is that private equity and debt funds still retain significant sums of money to invest, but another factor is interest from North American investors, for whom the UK is particularly attractive.

“The US president has reduced taxes at a corporate level and this has assisted the US stock market to reach valuations that are not necessarily supported by the underlying growth rate,” he says. “To justify the share price they’re trading at, corporates need to go and find acquisitions and the UK, with the pound trading at near all-time lows relative to many currencies, including the US dollar, offers the opportunity to invest in an attractive long-term market at reasonable prices.”

In addition to strong buying interest from the United States, Asian investors have also been active buyers, particularly in the technology space, where there is a desire to invest in both knowledge and skills. “They’re taking a balanced approach but, on the whole, are not demonstrating any real concern about a post-Brexit environment,” says Mr McCreanor.

Interest in UK firms from European businesses and investors has inevitably felt some impact in recent months, he adds, but the local market in the UK remains strong, as organisations use the opportunity to invest in their domestic footprint before Brexit.

While there is likely to be a reduction in M&A activity until the UK leaves the EU in March 2019, the current strong performance is likely to resume once this has happened, he says, as many investors from the US or Asia have the attitude that any trading arrangements with UK firms post-Brexit will be no different to their current set-up when dealing with the EU. But it’s likely there will be a period of readjustment when banks are likely to be conservative, Mr McCreanor adds, so it’s possible leveraged deals will see a temporary fall in activity.

Inevitably, however, much will depend on the sector in which businesses operate and the degree of thought they have given to how they will adapt to a post-Brexit world. Many businesses in the industrials sector, for instance, have a number of operational bases around the world and have developed contingency plans to cope with any disruption. 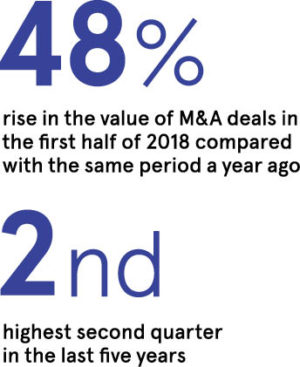 “I would expect some hesitation around bringing businesses to market in March next year just because the market is so intertwined with Europe and the UK in many instances,” says Mr McCreanor. “But, in the longer term, Brexit is likely to boost domestic manufacturing, which could make UK businesses attractive to outside investors.”

The broader healthcare market is also performing well at the moment. “We’ve just completed one of the most significant deals that has ever taken place in the animal healthcare marketplace, which just shows the attraction of the UK market for US corporates,” he adds.

The telecommunications, media and technology sector, meanwhile, is in such robust health that it is likely to remain largely unaffected by Brexit or other issues, Mr McCreanor believes.

“It’s disruptive; for example, you have fintech solutions disrupting financial services, and artificial intelligence and robotic process automation disrupting the manufacturing sector,” he says. “Those businesses are typically on a very high growth trajectory; the technology dimension is really inherent among all sectors, making it almost immune when it comes to Brexit.”

Other markets will potentially be more turbulent. The consumer sector could be constrained by growing levels of personal debt in the UK, says Mr McCreanor, and while some areas, such as niche food and drink products, may remain attractive, others may be less so.

“Segments of the leisure markets or consumer products are more exposed in any form of slowdown,” he says. “From an exit strategy perspective, people may be reluctant.” Similarly, certain segments of the business services sector could also come under pressure given the restricted access of both skilled and unskilled labour, although there will be continued interest in those segments which have a greater reliance on technology.

Regardless of the sector, there are a number of factors sellers must have in place before they start looking for buyers, including a strong market position, high barriers to entry for competitors and strong business performance with the ability to grow. “Make sure your business platform and technical knowhow are market leading, and that the earnings profile or business trajectory is attractive,” Mr McCreanor says.

“But you also need to understand who your potential buyers are and what their cultural nuances are likely to be. If you’re focusing on China or Japan, you need to meet potential investors fairly early; the Chinese in particular need a degree of validation that the deal is credible and will need several meetings before they really engage in the process. The Americans tend to move quicker, but good visibility and line of sight on the opportunities is very helpful to drive the best price.”

In the current climate, it’s vital that any business looking to sell starts the process early and targets the most appropriate potential buyers. Having an experienced adviser engaged and thinking on the client’s behalf, ideally well ahead of any eventual sale, to help ensure the business is in the best shape and to put it in front of the right audience is essential, he says.

“Most people could probably identify one or two possible buyers, but they won’t necessarily have the connections around the world or across industries to identify the most strategic buyer,” Mr McCreanor concludes. “Good quality advisers with boots on the ground in different geographies, and a broad perspective about industry intersections and dynamics, can maintain a dialogue with a particular asset and tell you when the window is open. That’s gold dust in uncertain times.”

To find out how Lincoln International could help your business please visit www.lincolninternational.com 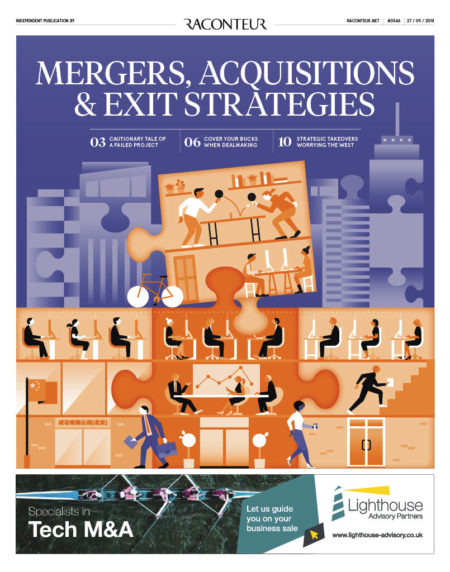