To illustrate a point, it’s often reported there are more men named Dave than women heading up FTSE 100 companies. This highlights that despite work so far to encourage greater gender diversity, be it through pay gap reporting legislation, sector-specific charters, voluntary pledges to reach certain targets and investment in numerous equality programmes, there’s still some significant way to go.

Last autumn Deloitte found UK boards were still just 22.7 per cent female, barely rising from 20.3 per cent in 2017, while globally, women hold fewer than 17 per cent of boardroom seats. In the UK, the FTSE 100 has just six female chief executives. For women of colour, progress is even worse; just a single non-white woman heads a Fortune 500 business – that’s 0.2 per cent – while all 25 female executive directors working for FTSE 100 companies are white. 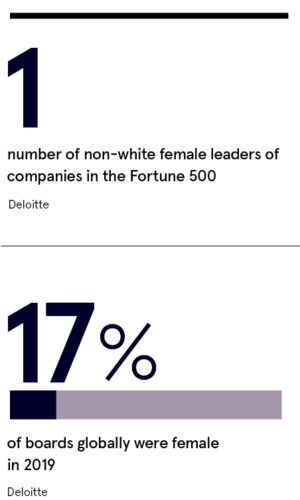 Clearly, solving diversity is not a simple process, as it’s not simply a business issue. The cultural issues that are embedded deep in our society are stubborn to shift, from the way we raise our children or the toys they’re subtly encouraged to play with. Even the way media treats women – strong women are “feisty” rather than “decisive” – is part of the problem. But what can a business truly do to play its part?

Few, if any, men state looking after family as a reason to step down, whereas the recent female boss of PepsiCo, Indra Nooyi, did just this in 2018. But why not? Most of the male chief executives I have worked with feel the same struggles as women do. Showing support, even vulnerability, is not a purely female trait, but we have been conditioned to expect male and female leaders to act in a certain way.

Talking about having men as allies can be seen as patronising; that women need men to support career advancement. But in the main, most see it in the vein it’s intended: the role men can have in championing, promoting and extolling the virtues women have. It’s my view that having male allies matters tremendously. After all, “male” roles are themselves changing, particularly in relation to childcare, and it’s surely common sense organisations can only truly transform when men also understand and are conscious of the blockages that often stand in the way of women.

Gender diversity must be seen as an issue involving men too

But there’s one important step-change I think needs to happen to encourage more male allies and it’s not a change men necessarily have to make. It’s us women that need to take stock too.

It is fantastic that a huge number of female diversity and networking groups have been created as a safe place for women to share, encourage and be heard. Invaluable though they are in raising and discussing gender matters and in sharing common experiences, we need to be careful we don’t cross a fine line. In doing this, many women have made it difficult for men to be the allies they need. By creating movements that have been more about creating radical change, we have simply closed the door to men.

If men continue not to be invited, aren’t we in danger of creating similar environments to the old boys’ clubs, which were the reason many of these groups were set up in the first place? And where else can men go to begin to understand some of the challenges that women face? When we criticise lack of male allies, perhaps we should be asking what are the barriers preventing them?

It’s my experience that actually men are much more empathetic and understanding, and more gender aware, than they are often given credit for. More often than not, they want to find ways of showing support for their female peers. Most do, after all, have wives, girlfriends and sisters.

What I am suggesting though is male leaders at the top take responsibility to be the driving force behind increasing the numbers of women in leadership roles. Particularly those who are white, privileged and may tend to be called Dave.

They need to be bold about making pronouncements about wanting to hit certain gender targets or having diverse boards and representation at all levels. But most importantly, they should be inquisitive; they should be looking to understand the issues and challenges that all women face. They must be completely authentic about being an ally and really live the role.

What I am also suggesting is women don’t make it harder for men than it might already be. I speak to a lot of men who are sometimes deterred from putting their head above the parapet because women demand they have all the answers.

Actually, men don’t need them. They just need to be allowed to the party. They need to be able to feel comfortable merely to ask questions, raise issues and be able to put across their perspectives. This is even more important when it comes to talking about an even harder topic within this debate: women of colour. I often hear from men that they feel the world has become so politically correct now they are afraid to use the word black.

We can’t let fear put male allies off. They are a good thing. They are needed. So, let’s encourage more men. Let’s encourage men to be the rightful allies in organisations that we all, not just women, need. But let’s also give the many men who want to get involved a chance. Change requires everyone to be on the same page, men and women.

“Change is happening, but it is at a glacial pace,” he says. “Are men doing enough to drive change? The answer is emphatically negative.

“Some C-suite executives are starting to understand the importance of change, but to be sustainable companies, they need to create a steady pipeline of talent.

“Businesses need to adopt more inclusive cultures, retrain mangers to limit biases, change language in job specs, and have less disparity between maternity and paternity leave, thus lessening the burden of childcare on women. Men have a role in driving this change.

“As leaders we can remove these barriers, but we also know that men are fearful of asking for parental leave or flexibility thinking it will affect their career. However, we have seen some positive change when men take parental leave or manage elderly care and flexible working. Together every small change will bring big results and that’s why I also love this year’s International Women’s Day campaign theme #EachforEqual.” 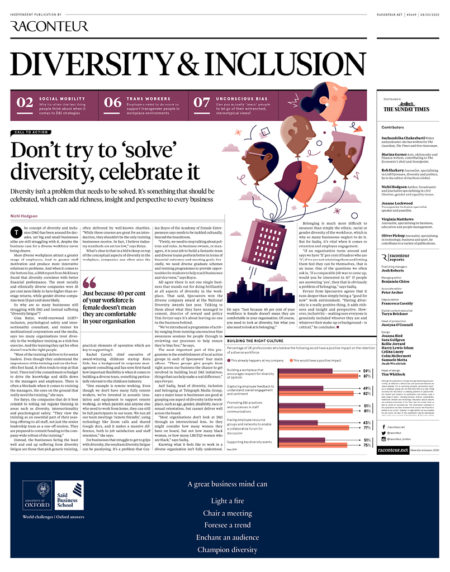