Traders can invest significant time and energy in developing a great strategy and studying the markets, but their human psychology and instincts will always work against them 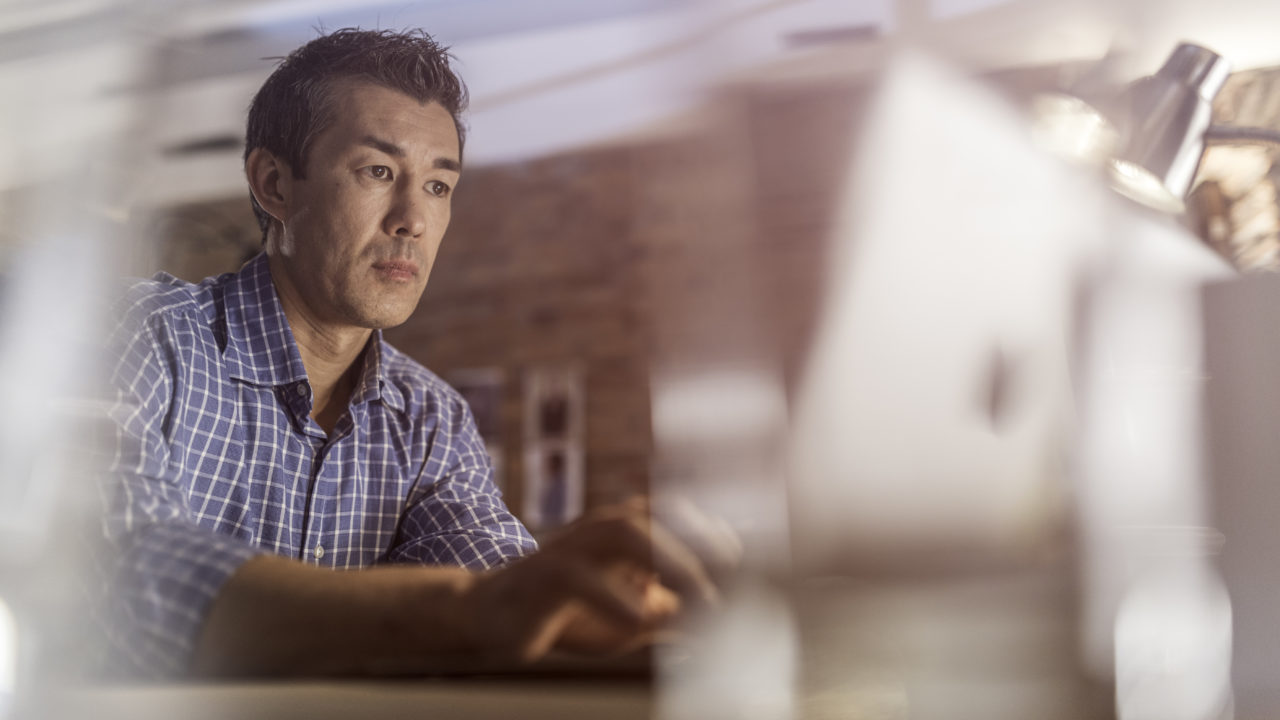 People new to trading often first try their hand at demo accounts or paper trading. Using play money, they can simulate real trading using platforms that track the movements of markets. Once they’ve learnt how markets can move and have a feel for how the platform works, they then make the transition to trading with real money.

Very quickly, however, many realise the trading strategy they developed in their test runs is seemingly not working as well as it did when they weren’t trading real money. They may be making gains on most of their trades, but they’re losing money overall. The reason is simple yet not necessarily easy to realise in the moment: emotions kick in.

When you’re not risking real money, it’s far easier to be sanguine when you’re not doing so well. But when real money is suddenly at stake, human reactions to success and failure change drastically. Successful demo traders can find the transition very difficult.

“Human emotions influence how people trade and respond to markets,” says Chris Beauchamp, chief market analyst at IG. “Because of the way humans are wired, their initial perception is a trade that makes money is good and a trade that loses money is bad. There’s a sense of you against the market that makes remaining calm hard to do.”

A run of small loses sparks an instinctive need to get back what was lost by trading in a bigger size. If losses then continue, there is an even greater desire to catch up. Trading too big or placing too many trades to win back money is a common mistake and is seen in both leveraged and non-leveraged trading accounts as well as traditional shares trading.

Most humans have this natural tendency to snatch profits and run losses. Successful traders turn the rationale on its head, cutting their losses short instead and running their profits. They understand they can experience more losing than winning trades yet still make money if the profits on the winners exceed the losses on their losers.

In Michael Covel’s famous TurtleTrader experiment, which trained novices in the science of trading and then gave them each $1 million to invest, those who followed the rules they were given were more successful than those who didn’t. The study exposed the common human failure to follow rules when your instincts are telling you something else. In trading, those instincts are the feeling that comes from a run of wins or losses. 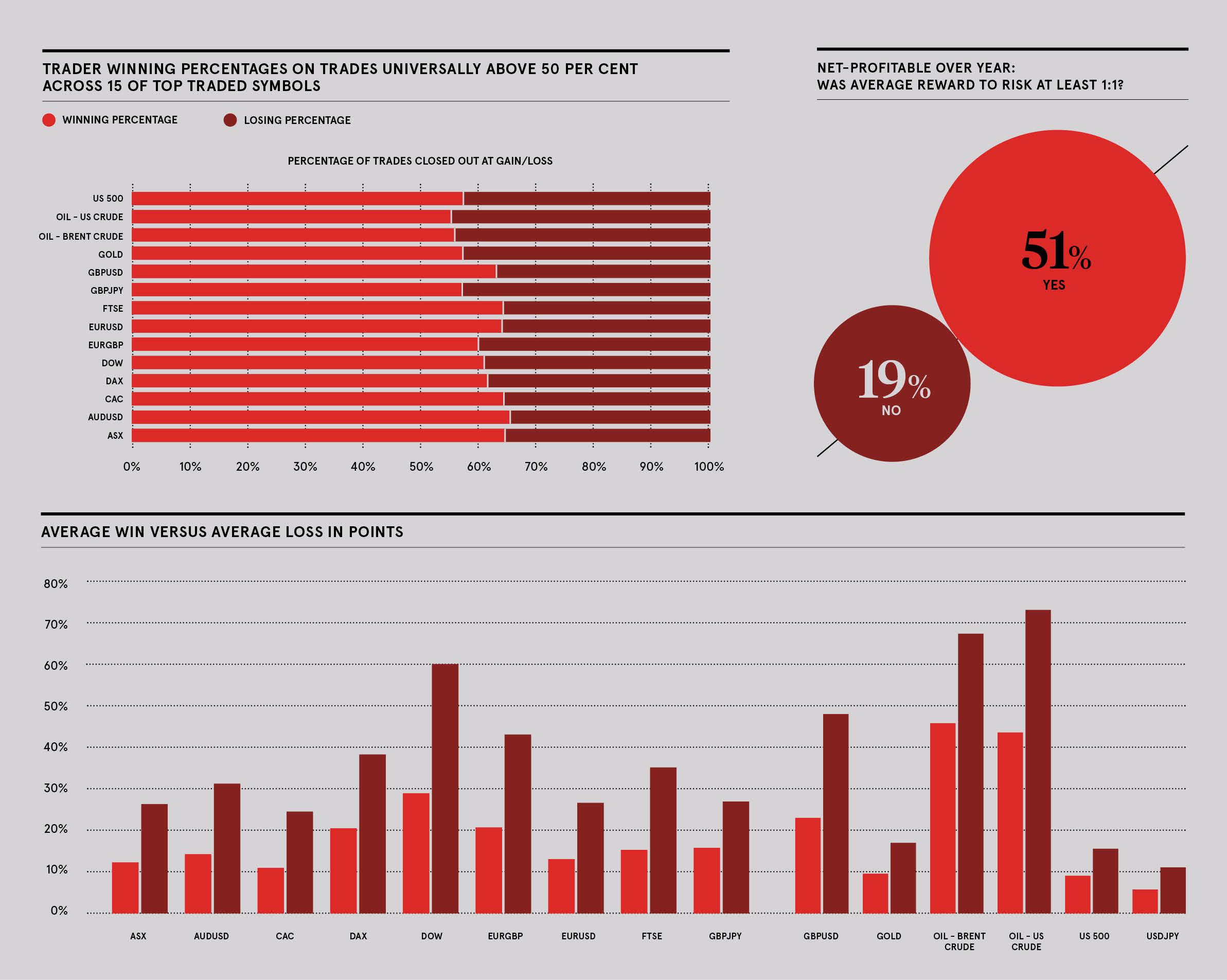 “Humans are wired to be risk averse so when you start seeing losses of an account you worry. And a run or two or three big winners is almost as dangerous to a trader’s psychology because you can get a sense that you’re not like everyone else, and you’re not bound by the rules, and everything you do will turn to gold,” says Mr Beauchamp. “That’s when reality catches you up and you wipe out all the money you’ve made.

“You don’t need to be a financial genius to look at a chart and say whether it’s more likely to go up or down. It’s not that they can’t see what’s in front of them, but the elements of fear and greed, which is what governs markets, really come into play when you’re trading. People hope their losses will get smaller and fear their winners will get smaller. You have to turn that around – fear your losses will get bigger and hope your winnings will get bigger – so that you get the appropriate risk-to-reward ratio.”

Many people go into trading thinking they need to win eight or nine times out of ten to be successful, but IG Group data shows they have to be prepared to take five or six small losses, sometimes in a row, to get just the two or three big winners needed to improve their account position. Crucially, too many people also think trading should be exciting.

“Humans’ attentions stray from what works because they seek out excitement,” says Mr Beauchamp. “To be a successful trader, you need to be able to ignore that temptation. Instead, find something that works for you and once you’ve found it, you have to stick to it. It’s a learning curve and people need to experience that to then start to improve.”

Trade in the appropriate size

If you’re worrying about a trade, you’re probably trading in too large a size. A good way to help combat emotions is to reduce drastically the amount you’re trading with in terms of your position size so you’re not seeing big swings in your profit and loss. Your emotions will calm down as a result. It’s a good rule of thumb to say if you’re constantly checking your trading account every five minutes or so, you’re probably trading either too much or in too large a size because you’re worried. Take a deep breath and slow down; you’ll have more time to react to problems when they arise.

Whatever your trading strategy is, make sure you always have those rules to hand so you can refer back to them. It’s a bit boring, but it’s a good way of looking back and showing where your winners and losers were and what happened after each of them. If you can identify where your trades followed the rules and where they didn’t then that also helps you maintain an emotional balance. Nobody wants to be reminded of their losers, but it’s a good process to learn. A trade might make money, but if it didn’t follow any of your rules, it was a bad trade. Similarly, be disciplined enough to know that a losing trade that followed your rules was not a bad trade.

Automate some of your processes

There’s no strategy that will work all the time, but if you use some element of automation, you can be better at following the rules. You can set preset limits for where you want your stop loss to be in terms of distance. That will help with your trading. The more you can automate some of the processes, the better you will be. The successful trader should eventually get to the point where it ceases to be exciting and becomes boring and routine, rather than having everything as a stab in the dark and hoping it will be successful.