Appsense found that millennials – 50 per cent of the global workforce by 2020 – are typically the most overstimulated when it comes to the modern workspace and the abundance of devices vying for our attention. While another study shows that in general workers have been found to be interrupted every three minutes on average and it takes up to eight undisrupted minutes to re-establish focus.

Ping. Ping. Ping! It’s Thursday morning and, in between ordering his coffee, Jack arrives at his desk at XYZ Ltd, a fast growing property developer, tired and bleary-eyed after a late night conference call with the US. He sits down having already answered five texts and instant messages from his team, received eight e-mails followed by a call asking if he got the invitation to the shared project in the new enterprise app XYZ Ltd is using, in which, by the way, he has five new actions waiting. By the time he pulls everything together to start the project and answer another urgent text from his boss, who’s in a meeting so can’t call, it’s lunchtime and half the day is wasted.

How do you prefer to communicate with your colleagues? If you thought about a messaging app, you are in the company of 75 per cent of millennials who would rather give up voice calls than the ability to text, according to OpenMarket

Does this scenario sound all too familiar? The employees of XYZ Ltd are certainly not alone as they face up to the challenges of collaboration and productivity caused by the myriad of communications tools we now use on a day-to-day basis, from text, IM, e-mail, voice and video, not forgetting social media. From the consumerisation of mobile applications and proliferation of bring your own device tablets and smartphones, the evolution of your workforce and digital workspace is underway.

To understand what’s behind this trend we need to look at the habits and needs of those who are entering the workplace – quick and mobile communication, productive teams and one digital workspace. According to the Inkling Millennial Report 2015, a quarter of the UK population are now millennials, with the total number set to hit the 17 million mark by 2019.

How do you prefer to communicate with your colleagues? If you thought about a messaging app, you are in the company of 75 per cent of millennials who would rather give up voice calls than the ability to text, according to OpenMarket. If you thought just e-mails or voice calls, your workplace is about to change drastically.

Sheryl Sandberg, chief operating officer of Facebook famously said in 2010: “If you want to know what people like us will do tomorrow, you look at what teenagers are doing today. E-mail – I can’t imagine life without it – is probably going away.” The time has come and five years later, Time.com found that the first thing most people do on their phones in the morning is now text messaging, not checking e-mail, which was the most popular answer in 2014.

In Mary Meeker’s 2016 Internet Trends Report, the Kleiner Perkins Caufield & Byers venture capitalist notes: “Messaging is evolving from simple social conversations to business conversations.” Messaging is not only penetrating the business market, but is evolving from being just another application in the toolbox to a dynamic platform that will serve as the foundation for how your workforce communicates and collaborates now and in the future.

However, expecting productivity gains by swapping one application (e-mail) for another (standalone enterprise messaging) is like jumping out of the frying pan and into the fire. This is perhaps why we’re already seeing backlash from users of standalone messaging apps, as it doesn’t take long for the volume of messages and messaging threads to exceed the number of e-mails employees used to receive.

Teams feel disconnected from real-time work conversations or separated from the flow of work content and information. This is because tools, such as team-messaging apps, which are designed to make communication and teamwork easier, are actually taking up more of their attention and exposing them to a growing number of distractions since many manage just one aspect of work, be that communications, tasks or content.

Unlocking productivity requires a workforce collaboration platform that synthesises all three of these vital and interrelated aspects of work management into a holistic, integrated collaboration experience.

The workforce is not only overwhelmed with information, but is spending more of their time just trying to find what they need to prepare for meetings, projects, calls or just the tasks and work they need to get done every day. Analyst firm IDC says the typical knowledge worker spends 2.5 hours a day just searching for information. That’s a staggering amount of wasted time that can be directly traced to the lack of a centralised workspace where a worker can easily find the tasks, files, notes, information and applications they need for each interaction.

So, is there an easier way? Can teams really enjoy the benefits of genuine unified communication (UC) that have been promised by so many companies who have then failed to deliver?

Enter BroadSoft, already recognised by analyst firm Frost & Sullivan as the market share leader for Unified Communications as a Service (UCaaS) with a 41 per cent share, more than three times that of its nearest competitor Cisco. The company recently announced the launch of BroadSoft Team-One, an all-in-one communications and collaboration application that differentiates by leveraging artificial intelligence to find contextual information and integrate apps, social media notifications, messaging, context, voice and video communications into one place. 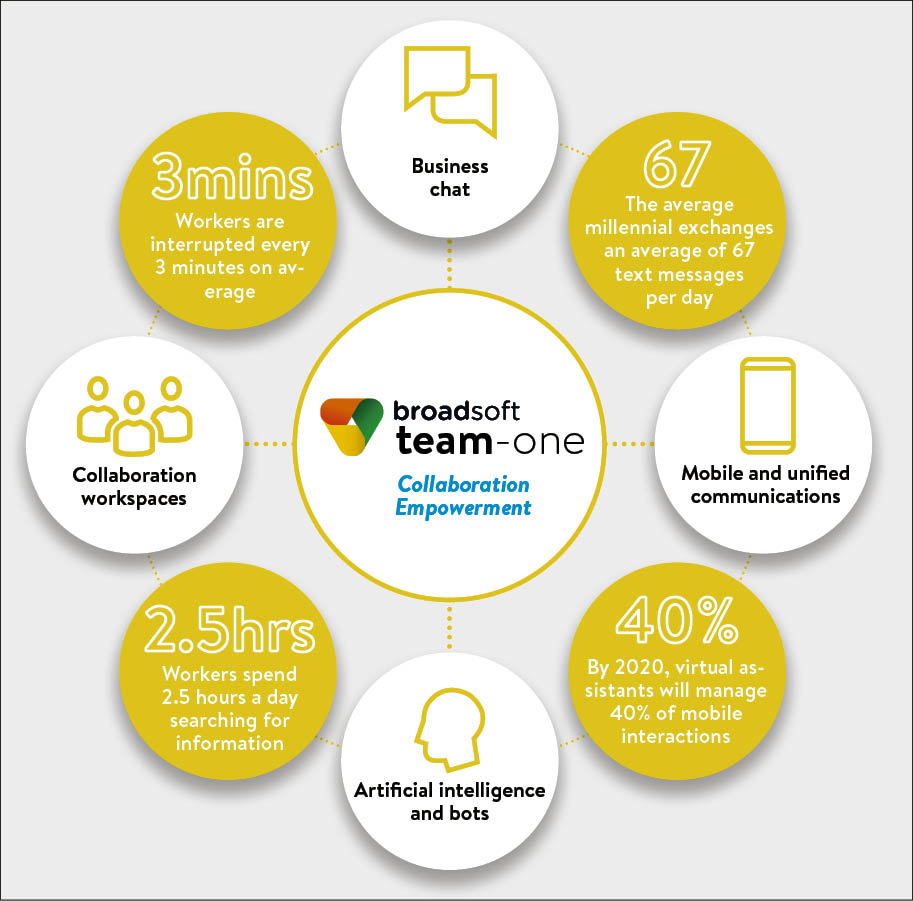 “Rather than making workforces more productive, standalone messaging apps are exacerbating information overload due to their lack of integration with other core communications and collaboration services,” says Craig Decker, managing director, Europe, the Middle East and Africa, at BroadSoft. “By integrating enterprise messaging and team collaboration with our broader portfolio of cloud unified communications services, Team-One makes it easy for workers to stay engaged and productive from any location and using any preferred device.”

Dominic Black of Cavell Group, a research, consulting and technical services business, points out that one of BroadSoft’s unique selling points is it already has a vast potential customer base in more than 80 countries, as well as the means to deliver these services through its partnerships with a large number of service providers, including 25 of the world’s top 30 by revenue.

“BroadSoft is enabling businesses to take advantage of team messaging and collaboration alongside the cloud communications products that they already offer,” he says. “By adding collaboration tools like Team-One, companies can enhance the efficiency in which their team communicates internally, and allow teams and individuals to reach new levels of productivity and mobility.”