The UK government wants the world’s most effective border by 2025, friction free yet with strong protection against threats such as crime and biosecurity. A virtual roundtable of experts discuss how to make it happen 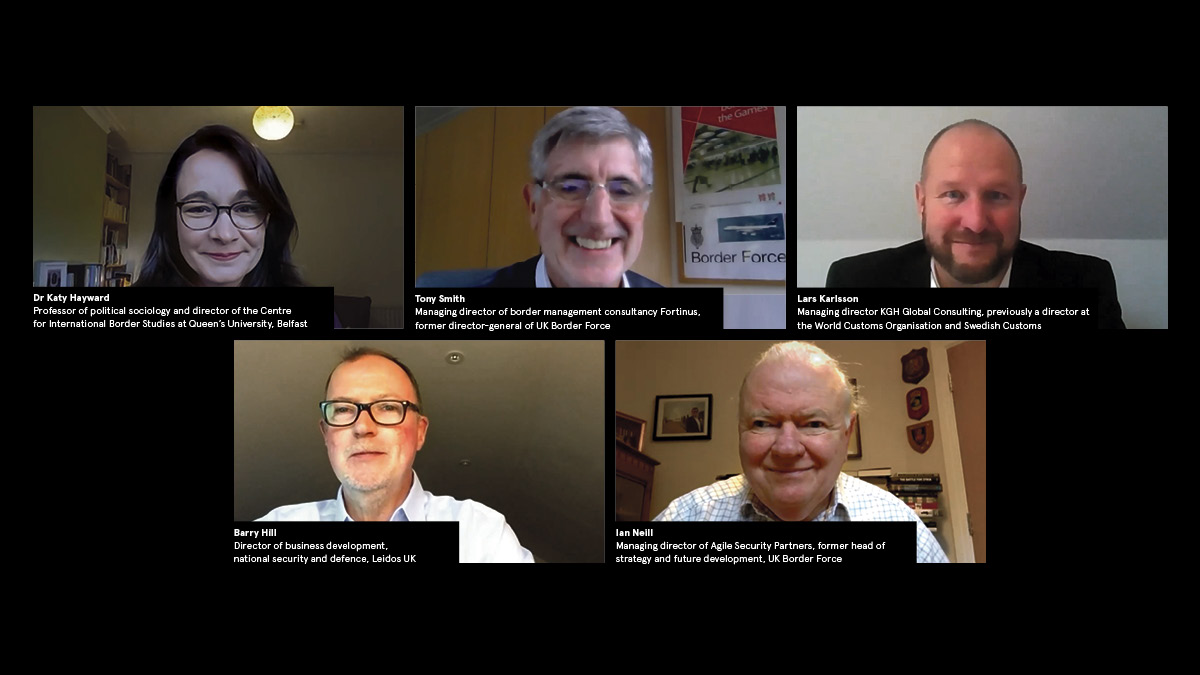 Dr Katy Hayward, Professor of political sociology and director of the Centre, for International Border Studies at Queen’s University, Belfast

What are the issues facing the government as it creates the post-Brexit border?

TS: The first is around security: the growth in terrorism has shifted the border from its traditional focus, which was immigration based. The second is Brexit and customs: there are huge challenges in controlling the movement of goods around the UK and the European Union. And the future one is coronavirus and health, with a lot of debate about the health credentials that people may need when they’re moving around the world, such as vaccination certificates. Of these three, the only one we’ve cracked, and we haven’t got it absolutely right, is security.

BH: Putting politics to one side, I agree this is an opportunity to think about the border differently. The technology enablers are very much in operation around different parts of the world today.

KH: The use of advanced technology cannot in and of itself constitute a border strategy. Before we get to the process of designing the border, we need to ask what are our values, what are our priorities? What and who will be prioritised in terms of trade and travellers? And borders cannot be managed unilaterally. Effectiveness depends on communication and co-operation with those on the other side. Policy matters here too.

Do we need a new vision?

LK:The borders we know were developed in Europe around 50 years ago when we didn’t have the technology or information we have now. We shouldn’t see the border as a location you pass; crossing the border is a process that begins when you buy a ticket or the consumer buys something from overseas on the internet. We need to create smarter borders, with the work done at an early stage and then at the border itself we already know what is coming; we just verify who and what is passing the border, making sure it’s what we expect, and intervening in high-risk cases.

IN: If you’re doing extensive checks at a port, that’s the worst-case scenario. Of course, there is an inevitability about criminality so you will have to do it, but you still want to push as many checks away from the border as possible.

This move away from the physical crossing point was a key part of the government’s 2025 Border Strategy consultation over the summer. But haven’t previous digital border projects run into problems?

TS: One problem is we have at least 26 different government departments or agencies with an interest in what’s crossing the border. What we need is integrated border management, creating a composite structure that manages all the agencies around the border. The United States, Canada, Australia have all done this.

BH: I think the new organisation set up in the Cabinet Office trying to drive strategy should improve the chances of success; it’s a good sign. And they’ve consulted widely. It’s the continuation that’s the real test. When we’re six months down the line, and it gets a little harder, can we keep those communication channels open?

What are the challenges around moving border processes away from the physical crossing point?

BH: You can come up with a model of a virtual border rather than a physical border, but then you have to determine the business processes within this that are efficient, the rules which underpin what you’re looking for. I think many people should play a part in that, the government, industry and some specialists like the people we have on this virtual roundtable. Only then can you decide on the smart technology to make it work.

LK: If you put in new information management without co-ordination, it can even cement old, bad processes. But success is possible. When I was head of Swedish customs we introduced the “single window” system on the Swedish-Norwegian border. Each traveller or trader sees just one official who works not only for Norway and Sweden, but in effect for some 900 government agencies across 28 EU countries.

What are the significant improvements waiting to be made?

IN: There is the possibility of a step-change in the greater use of cloud and mobile. We’ve seen some of this in the registration of EU citizens for residence: pretty much every man, woman and child was done using self-validation via a mobile app. There’s a lot of flexibility now with technology; you can keep your data securely on your phone and share it with who you wish. The cost-savings are attractive and it ends the days of big, monolithic systems which have caused problems in the past.

TS: When you arrive in the UK, there should be a line for people who have pre-registered and been checked. You look at a camera and we let you straight through. For goods, you should have something similar in concept, a trusted-trader scheme.

LK: The UK should have a modern trusted-trader scheme handling 90 per cent of movements; that’s what leading countries like the Netherlands are aiming for.

IN: For a trusted-trader programme, we just need to know that you’re coming and what’s on your truck. When you arrive at the border, we just verify it’s you who is driving it.

Will people be wary about giving up extra data like this?

KH: If we give data voluntarily for a faster border crossing, we need to be clear about whether it is to be used solely for that purpose. Take the example of the test-and-trace system for COVID-19 in England. People were encouraged to use the system and within weeks it emerged it was potentially being used to identify those who were breaking self-isolation. It’s easy to see how trust and consent can be lost when lines of privacy are blurred. We also need to be ahead of the game in regulating the use of different types of data under the auspices of border security, such as social-media profiling.

BH: But if you get the ethics right and people trust it, this kind of scheme can be really successful. Technology is advancing rapidly and there have been pilot schemes with very high rates of recognition. The costs at the moment can still be high, but as non-intrusive inspection technologies advance rapidly and we move to increasingly digitalised border processes, the advantages and opportunities they deliver will be invaluable to achieving UK border ambitions.