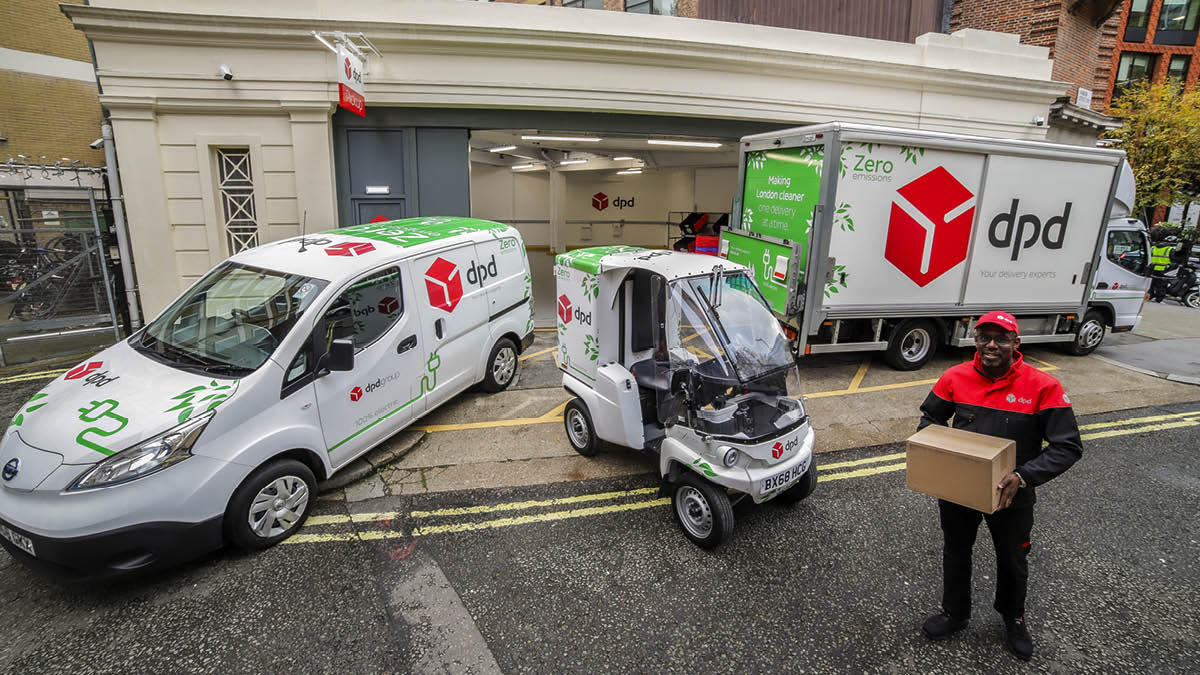 The Department for Transport launched its Road to Zero Strategy in July 2018 outlining how the government will support the transition to zero-emission road transport.

As the UK’s number-one domestic parcels carrier, DPD entirely supports the objectives of the Road to Zero and has been embarking on its own journey to reduce carbon emissions for many years, against a backdrop of ever-growing demand for its services, as a result of the boom in online shopping.

Since 2012, the number of parcels DPD delivers each year has increased by 136 per cent.  Its 13,000-strong team now delivers 250 million parcels a year for thousands of customers, including many of the UK’s leading brands, such as ASOS, John Lewis and Nike.

In 2017, DPD launched its Smart Urban Delivery Strategy with the aim of becoming the UK’s most responsible city centre delivery company. Today DPD has a fleet of 139 electric vehicles (EVs), set to increase to 500 in 2020, which will be the largest EV parcel fleet in the UK and close to 10 per cent of its total van fleet.

The centre piece of the strategy will be a network of all-electric micro-depots in central London, the first of which opened last year in the heart of Westminster. The 5,000sqft micro-site acts as a satellite for DPD’s London City depot in Southwark. Before the new site opened, 3.5-tonne diesel vehicles were travelling into central London every day from Southwark, averaging 614 miles.

Change isn’t happening fast enough, so we must now start to tackle the barriers that are slowing the Road to Zero

The diesel vehicles have been replaced by two electric 7.5-tonne FUSO eCanters, running daily trunk routes between London City and the DPD Westminster depot where the parcels are then sorted on to final-mile electric vehicles. The result is a total saving of 45 tonnes of CO² a year and a 49 per cent reduction in the number of miles per parcel.

While the operation has won awards and been lauded as a future model for city centre logistics, DPD has been frank about the challenges it has faced. In October, DPD issued a white paper with an eight-point action plan calling on vehicle manufacturers, energy providers, national and local government to start working together to create an infrastructure that makes large-scale EV deployment feasible.

While the number of ultra-low emission vehicles on UK roads is growing rapidly, there remains a significant issue around the availability of all-electric 3.5-tonne commercial vans, the workhorse of the parcel delivery sector. If the government’s ambition for all new vans to be zero emission by 2040 is to be achieved, these vehicles must come to market sooner.

Manufacturers have focused much of their early, and therefore expensive, research and development on the larger European left-hand drive market, which means UK companies are struggling to get hold of the vehicles they need.

While historically the commercial vehicle market has been dominated by a small number of traditional manufacturers, the new technology inherent in EVs has meant there has been a recent shift towards startup companies developing small and micro-vehicles for final-mile delivery.

For example, DPD has partnered with Oxford-based manufacturer EAV to create a British-built e-cargo bike, the P1. The bio-mechanical hybrid electric-assisted pedal bikes have a range of 60 miles and with a 120kg payload can cover 100 parcel stops in a day and then be recharged using a normal 13amp, 240v plug socket.

Regulators often find it difficult to keep up with innovation and these new vehicle types challenge the norm. As such they present issues for regulators and government agencies. The registration of the DPD Paxsters, innovative mini-EVs from Norway, was an incredibly arduous process. If the government is going to achieve its Road to Zero ambition, it must find a way to speed up the registration process of small-batch vehicles for use in the UK.

The Transport for London (TfL) Freight and Servicing Action Plan, launched in March, contains a number of high-level objectives and actions, but these require fleshing out and further detail to be added to understand how they can be delivered.

TfL now needs to engage with London boroughs that play a role in delivering the plan, in conjunction with localised transport and planning initiatives.

All too often we see warehouse and distribution property being pushed out of city centres, affecting productivity and increasing van mileage. This is because longer stem mileage decreases the number of parcels a van and driver can deliver each day, therefore increasing the number of vans required.

As the price of land increases, multilevel floor warehousing is becoming the only solution for industrial property developers to make feasible cases for redevelopment of city centre locations. The planning process needs to consider these demands and smooth the planning process where possible for these complex sites.

Decarbonisation of transport fleets is challenging, both operationally and financially. It isn’t just about switching to EVs, it is about designing totally different business models and processes. But it also about having the right infrastructure and environment in which to thrive.

There are a number of companies like DPD who have already made large financial commitments to purchase commercial electric vehicles and change the way they work to help reduce emissions and congestion for the benefit of society. But change isn’t happening fast enough, so we must now start to tackle the barriers that are slowing the Road to Zero.