The growth opportunities in sub-Saharan Africa are unparalleled. Home to 1.2 billion people and hosting the world’s fastest-growing economies, the continent possesses many exciting attributes. However, Africa’s development continues to be held back by an infrastructure gap, including the telecommunications towers required to service such growth.

The tower infrastructure gap is typically quantified by dividing the number of subscribers in a country by the number of base stations transmitting a signal. In developed markets, it can be as low as 1,000 subscribers per base station. In Africa, it can range from around 3,500 in Tanzania to as high as 6,500 in the Democratic Republic of Congo (DRC). This means up to six times as many people are served mobile connectivity by an individual tower in Africa compared to the United States.

“That’s only the people with mobile phones,” says Kash Pandya, chief executive of Helios Towers, a telecom tower infrastructure group that enables mobile operators to roll out and enhance coverage in Africa.

“Mobile penetration is over 100 per cent in developed markets because people have multiple devices. In the markets we cover, penetration ranges between 38 and 67 per cent. Fewer people have mobile phones, but the networks still struggle with capacity. The pressure on mobile network operators (MNOs) will increase as more people use data to do things we take for granted like accessing social media and video-streaming applications.” 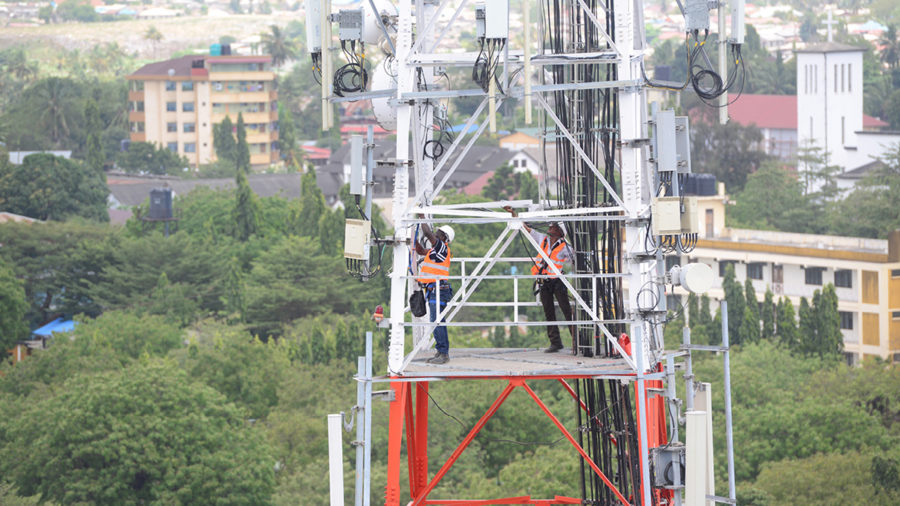 Helios Towers has established one of Africa’s most extensive tower portfolios with close to 7,000 towers across five countries

Two thirds of the 240 million people Helios Towers serves through its approximately 7,000 sites in Tanzania, DRC, Ghana, Republic of Congo and South Africa are under the age of 30, the most data-intensive user demographic. This is set to rise by a further 40 million people by 2025.

As many African markets have skipped fixed-line networks altogether, all their traffic must go through mobile networks, creating an urgent need for more points of service and the infrastructure required to be able to deliver a quality, useable service.

Digital access is crucial to economic growth anywhere in the world. In Africa, the challenge is exacerbated by a parallel infrastructure gap in the lack of paved roads, making it extremely difficult to execute some projects. Helios Towers had to transport towers up to 90 metres high through jungle terrain to build an infrastructure backbone in DRC, where half the towers are run off solar-hybrid power systems independent of grid connection.

“The whole basis of modern economic growth is access to markets and information,” says Pandya. “If you don’t have access to data or market pricing, how do you know you’re selling at the right price? Telecom infrastructure is a really enabling technology and we see communities grow based on getting that access. It’s amazing how much commerce can come just from a tower.

“In many areas we have started bringing solar charging stations with our towers enabling more of the community to be online. When mobile coverage comes to an area, we see huge uptake in the distribution of SIMs and there is a clear correlation between mobile access and economic development. It catalyses growth in these markets as much as highways or other physical infrastructure.”

There is a clear correlation between mobile access and economic development

In 2018, 73 per cent of mobile telecommunications towers in Africa were owned by MNOs, compared to 33 per cent globally. This is highly inefficient in terms of the costs required from MNOs to operate in the region. Helios Towers has pioneered a co-location model in the region, allowing MNOs to lease space on one of its towers to save significant new-build capital expenditure and vastly accelerate their speed to market, while ultimately helping to close Africa’s mobile infrastructure gap.

There are also inefficiencies in an environmental sense when a country’s towers are predominantly owned by individual MNOs, as opposed to co-location which drastically reduces the environmental impact through avoidance of any duplication of infrastructure, including the associated power systems.

Furthermore, between 2016 and 2018, Helios Towers has installed solar-powered technology at 430 sites, made more than 400 connections to power grids where available and created over 740 hybrid, off-grid, solutions. In 2018 alone, these investments by Helios Towers saved more than 5,000 tonnes of CO2 emissions as well as delivering fuel cost savings.

The company is also keen to return value to Africa’s economies by leveraging and upskilling its workforce. As opposed to the numerous international organisations that have invested in Africa, but flown in expats to run their operations, 99 per cent of Helios Towers’ teams are from local African talent.

Around half its staff are trained in lean six sigma, a framework used to drive product improvement and reduce operational costs. This approach of large-scale training is enabling all levels of the organisation, whether it’s the in-country managing director or the field manager at the end of the chain, to improve efficiency daily.

Helios Towers not only employs around 400 people directly, but also supports more than 7,000 contractor employees who are engaged in the maintenance and security of its tower network. The company has helped to raise business standards locally among its suppliers and also the people they employ. Fostering a higher level of health and safety, and execution standards, creates a better environment for the whole ecosystem.

“It’s a cliché, but it really is far better to teach someone how to fish than to just give them a fish,” says Pandya. “We’ve developed a language of talking about waste, data-driven decisions and how we look for root causes. Before, a lot of the individuals would make decisions on gut feeling. Now we have people going to the root cause so we can solve problems better and identify efficiencies quicker. That’s happening at every level of the organisation.

“The great thing about this economic development is it’s intrinsic to our business activities. You build one tower, which improves the economy in an area, and suddenly an area that was a low-population area becomes a higher-population area, which means more infrastructure is needed and there are more business opportunities. As we spread our products in partnership with our customers, we’re enabling African economies and some fantastic innovation.”

For more information you can visit www.heliostowers.com