From the chief executive to the intern, the office of today is more productive than ever before thanks to new collaboration tools such as Microsoft Teams, Slack and Facebook Workplace. But there are undeniable risks to communicating using these tools that, if not properly captured and monitored, can prove very costly 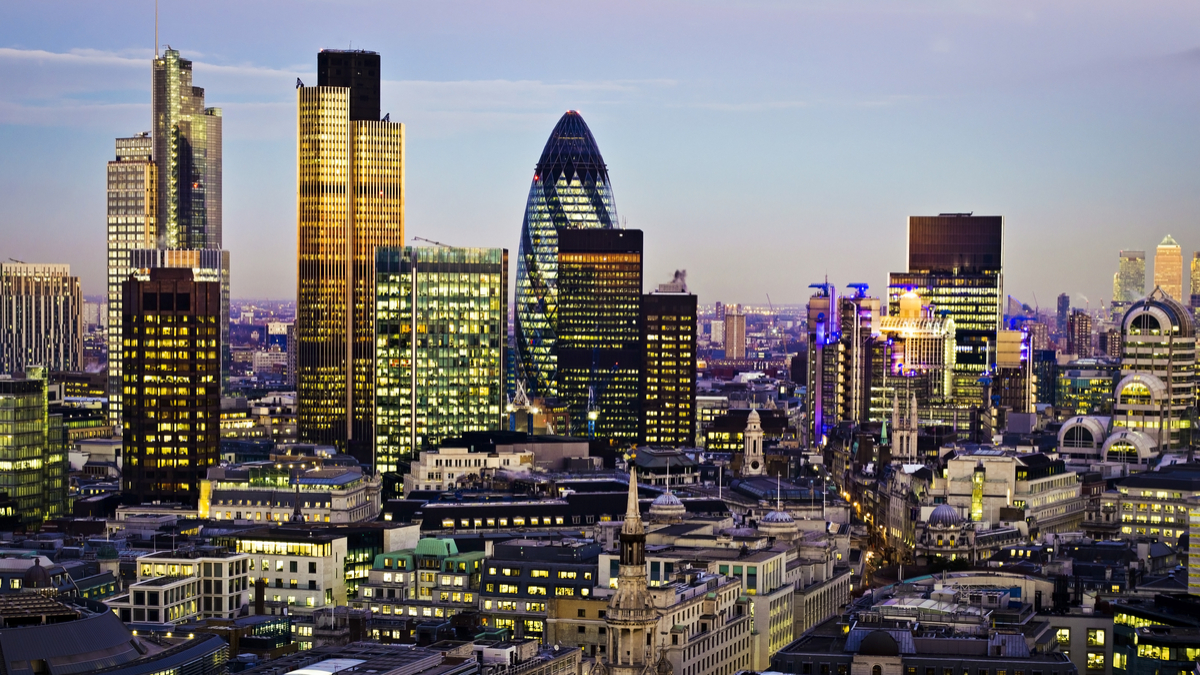 Cast your mind back to the turn of the century. The Soviet Union was breaking up, Tony Blair entered 10 Downing Street, Blur and Oasis were battling it out to reach number one in the charts, while the threat of Y2K loomed large and the millennium was nearly upon us.

At the same time, technology was advancing apace. In the office, executives up and down the country were given their first BlackBerry handheld email device. For those of us old enough to remember such a moment, it was big. Email was big. It changed the way we communicated with our colleagues.

Fast forward to 2018 and communications technology is once again revolutionising the workplace. The BlackBerry has been consigned to the dustbin of corporate history. The office of today prefers to use new, more immediate tools that sit on your desktop, your phone, your tablet and even your wrist watch – all parts of a person’s connected suite of technology.

Email remains a critical component of the modern office communications toolkit, but its influence is waning. For evidence, just look at Google’s recent decision to kill off its Gmail Inbox platform.

Google’s move away from traditional email shows the power of the movement towards collaboration platforms such as Slack, Workplace by Facebook and Microsoft Teams. These platforms are a modern response to the demands of an ever-changing workplace. And they are replacing email at a rate of knots.

If companies do not have systems in place that can store conversations across a range of platforms and in a range of formats, they risk facing serious compliance issues

Instant messaging, group conversation streams, file sharing and information tagging are all making companies second guess the suitability of email, a technology that has remained largely unchanged for years.

Nowadays, the most productive offices catch up on emails every few hours, while focusing most of their time on chat groups and work streams. This has resulted in massive growth for these platforms. As of March this year, Microsoft Teams was being used by 200,000 organisations, having only launched its preview version a year before. In the same amount of time, Slack gained two million daily active users. With a total user base of eight million people, it’s no wonder Slack has a stock market valuation of more than $7 billion.

Then there are other social platforms such as Twitter, LinkedIn, and Facebook, which are in common use among younger employees discussing both their work and personal lives.

When you look at the progress over the past two decades, it is overwhelmingly clear just how much communication technology has changed. However, the archiving systems that companies use to store these messages have remained the same since the days of Oasis and Y2K.

In the early-2000s, the rapid ascent in popularity of email made companies aware of the need to file the millions of digital messages they sent and received each day. Archiving software companies sprouted up, offering systems that could easily manage the onslaught
of data.

These same archiving solutions are still in use today. Based on the same technology that was suited to storing massive amounts of raw text data, these systems simply can’t stand up to the complexities of modern communications.

Collaboration tools, instant-messaging apps and social media platforms use a vast array of messaging formats. Images, video, GIFs and emojis are now commonly used by the entire workforce, not just millennials. A person-to-person text conversation can change to a group chat at the press of a button and then extend seamlessly to a voice or video call.

If companies do not have systems in place that can capture, archive and supervise conversations across a range of platforms and in a range of formats, they risk facing serious compliance issues. 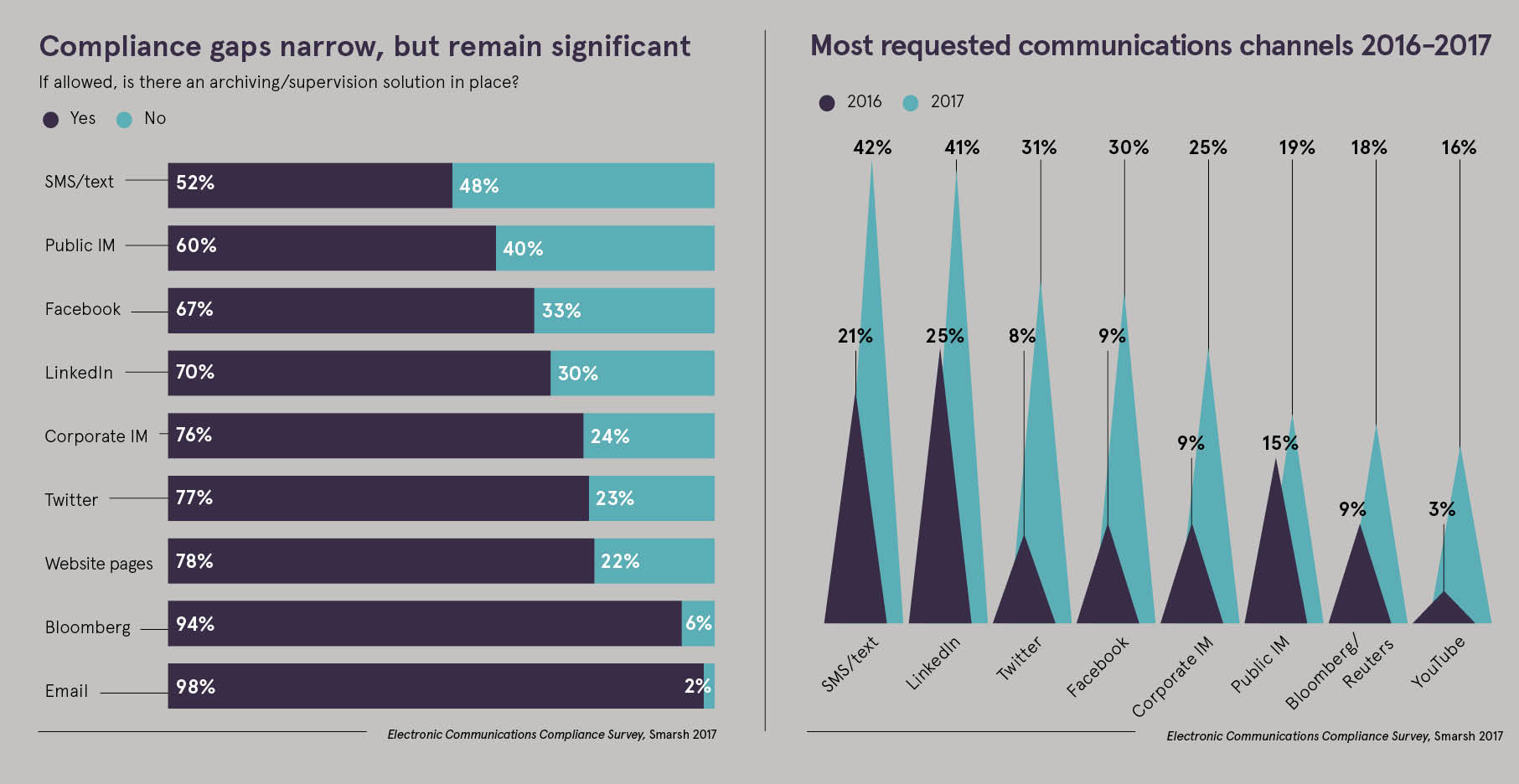 Companies are aware of this. According to Smarsh’s 2017 Electronic Communications Compliance Survey, between 2016 and 2017 the number of companies requesting archiving solutions for SMS, corporate instant messaging and LinkedIn roughly doubled, while those looking for solutions for Twitter and Facebook more than trebled. Despite this, only 61 per cent of companies surveyed had archiving platforms that supported communications on social media.

This is why Smarsh has launched its new Connected Suite. The truly unique platform enables organisations to respond proactively to the changing dynamics of their employees and customers, while mitigating the compliance risks that are often associated with new communications technology.

Having recently merged with Actiance, Smarsh has combined the two companies’ industry-leading archiving solutions. These solutions are not based on technologies conceived two decades ago. They have been purpose built to match the needs of modern communications.

The Connected Suite is an entirely new product framework. It is made up of three components: connected capture, connected archive and connected apps. The platform gives clients an unrivalled ability to capture more than 80 different forms of workplace and electronic communication, spanning email, mobile messaging, social media and voice conversations.

Many organisations operating in heavily regulated industries have been put off adopting collaboration platforms due to compliance fears. However, forward-thinking firms must take steps to enable both compliance and productivity, rather than choosing one or the other.

Smarsh recognises that this new generation of collaboration and communication tools are not going anywhere. Fears over compliance should not get in the way of the enhanced productivity that these tools can offer. By tailoring its suite of archiving tools to meet the demands of modern communication, Smarsh is enabling their customers to focus on growth rather than communications compliance.