Where are UHNWIs located globally, what goods are they buying and from which brands? Will Grahame-Clarke provides a window into the life of luxury shopping

Super-rich shoppers have not let prolonged global economic uncertainty cool their appetite for luxury. Simultaneously there is also a trend away from bling. Ultra-high-net-worth (UHNW) shoppers are no longer just satisfied with gaudy opulence.

The United States dominates the regional ranking, with 63,000 UHNW residents (49 per cent), while Europe has 31,000 (24 per cent) and 26,000 (20 per cent) reside in Asia-Pacific, including China and India. China has as many UHNWIs as all of Europe in 2001. The rate of increase is projected to be 9.3 per cent for emerging markets against 6.4 per cent for the developed world.

It is a trend to greater wealth which shows no sign in abating. In their latest wealth report, Royal Bank of Canada believe UHNWIs are focusing increasingly on prioritising growing their wealth. Specifically, their preference for growth increased dramatically to 30.7 per cent from 18 per cent in 2013.

On top of the direct influence that UHNWIs have on the world’s economy, they also have an indirect impact, according to researchers Wealth-X. In addition to the growing number of UHNWIs globally, there are more than a million people with “access” to ultra-wealth when factoring in UHNWIs’ family members, extending the reach of the super-rich even further.

According to the Stonehage Group, which serves international UHNW families, prices of a basket of luxury goods and services are more volatile, and actually fell by 1.1 per cent in the 12 months ending April 2014, following an increase of 4.9 per cent. It is these kinds of sums which are driving the dynamism of the luxury industry.

Margaret Wolhuter, strategy director for brand consultancy The Partners, argues that the bespoke or the individual and digital interaction increasingly define the world of luxury. “Luxury can begin for the individual with a special interest which can become a passion – investing which can focus more on craftsmanship, limited editions and one-off items,” she says.

“Luxury items can also signal status and belonging to a world. Within that you have one-upmanship. Acquiring something which someone you might be competing with does not have. Then there is the whole investment arena of buying for investment purposes as a hedge against equities. People are buying art for this reason.

But for Ms Wolhuter it is the millennial generation, people in their mid to late-20s, in the midst of generating their own wealth or on the cusp of inheritance, which show most clearly where luxury is heading.

Wealthy people don’t want to look like other people; they don’t want known brands, and there is a big move towards bespoke and designers

“There is another driver increasingly among millennials, who are using wealth to express who they are. It is a push back against the traditional luxury brands and it has started to hurt established brands,” she claims.

“Wealthy people don’t want to look like other people; they don’t want known brands, and there is a big move towards bespoke and designers, which signal their interests and knowledge. It is a desire to express oneself through insider knowledge of designers. It was Alexander McQueen ten years ago and now it is Proenza Schouler and Nicholas Kane – there is a cycle.

“They wouldn’t think of going into Gucci to buy a handbag. It is a trend which doesn’t just affect shopping, but also tourism. Their holidays are very different to their parents. Theirs is more eco-tourism or unusual one-off experiences or holidays with a thrill element.”

For these individuals the digital world is also very important. “It is how they live and how they make their choices,” says Ms Wolhuter. “Instagram is a big part of this. For millenials authenticity is very important. They are influenced by what others say.”

Only two years ago, Facebook was the social media platform used by all the world’s 25 leading luxury brands. However, Ledbury Research estimates usage of Instagram by UHNWIs has outpaced that of Facebook by 19 times and Twitter five-fold.

“Emerging markets are catching up very quickly,” she says. “Sometimes it is generational, but in most cases they are only ten to fifteen years behind more mature markets. People are realising they want something singular.”

This process of catching up can be seen between places such as Switzerland and China. According to Wealth-X World Ultra Wealth Report 2014, for example, 91 per cent of China’s UHNW population is self-made new wealth compared with only 43 per cent in Switzerland.

“There has been a notable shift in attitudes of luxury consumers, particularly those from maturing markets, such as China and the UAE, who have increasingly sophisticated tastes,” says Michelle Emmerson, chief executive of British luxury alliance Walpole. “There has been a real, sustained interest in the heritage, provenance and craftsmanship of a product, with a focus on the quality of materials and story behind its making.”

In both developed and emerging markets this has heightened the challenge of maintaining the paradox of being singular, bespoke and exclusive, while also selling widely and being commercially successful. Italian luxury analysts Altagamma estimate 25 per cent of luxury brands are already, or are at risk of, losing exclusivity.

Ledbury have a term for this problem, “exclusive ubiquity”, and have identified a repertoire of at least three industry responses.

Luxury houses have been taking back control of distribution. For example, Louis Vuitton has been ahead of the curve by only selling through its own stores. In so doing Vuitton presents the choice between brands rather than products, according to researchers at Ledbury. Another response has been to introduce multiple lines under one brand such as jeans, sport or privé. Armani and Ralph Lauren have been the key exponents. A third has been to sell licences for remote product categories, such as perfumes and sunglasses, which shoemaker Jimmy Choo has done to the great acclaim of his accountant.

In 2015, the rate of growth in luxury sales looks set to accelerate. Consumer confidence continues to improve, with the US at the centre of growth expectations followed by China. According to Ledbury Research, global luxury sales are expected to increase by 11 per cent in 2015.

“If I had to pick one recent innovation in luxury it would be digital,” says Ledbury’s luxury analyst Madelaine Ollivier. “Brands are concerned they will lose exclusivity with an increased online presence, but Burberry, for example, has shown it can be done well. They have been leaders and innovators in digital. Other luxury brands are now looking to their example and boosting their online presence. There is so much potential if luxury brands get their digital offering right.”

Where fruit is ripe for luxury market

However, for the Ishikawa couple these grapes were a considerable luxury. The grapes were of the Ruby Roman variety and cost £3,170 or £100 per grape. They probably outshone the cake. The Ruby Roman, which was first sold in Japan in 2008 for £570 a bunch, is just the summit of the Japanese obsession with fruit of all kinds. Even a standard individual mango typically sells for £30 in a Tokyo shop. 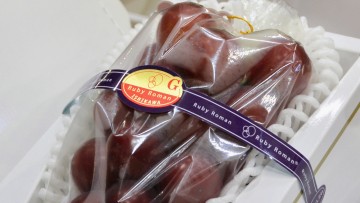 The rise in Ruby Roman prices demonstrates one aspect of luxury which is true globally – production is restricted. As with any resource like collectables, once demand is in place and the commodity is scarce, competition drives up prices even if the integral value or utility is low or zero. The Ishikawa bunch was purchased at auction.

Alongside grapes, the Japanese prize melons, apples, strawberries and pears, each particular to a region and season. Japanese fruit is produced on small farms and private small holdings in unbelievably labour-intensive ways.

The labour and attention to detail they represent makes them ideal gifts in Japan. Almost every aspect of Japanese society is constructed as excuses for gift-giving. On returning from holiday, for example, it is expected to return with a gift. For fruit, this should be from the area you visited. It should be seasonal – the Japanese become quite excited by the first melon crop of the year. They are not interested in year-round availability.

Apart from fruit, whisky and tea are typical gifts. Each like fruit are prized for their artisanal qualities. Profound quality in the ephemeral is a leitmotif of Japanese luxury. Presentation is vitally important as well. Each fruit should be individually wrapped, perhaps in satin rather than tissue paper.

Unsatisfied by this, fruit farmers have also given to shaping their fruits. Heart-shaped melons are not unusual as are square ones and hexagonal oranges. Visually the fruit must be perfect. In a sense this eccentric luxury represents an eternal truth for not just Japanese luxury – it is the thought that counts.