If you visited Silicon Valley a decade ago, it was hard not to be impressed by the disruptive – and quite welcome – antidote to a world that loved fossil fuels with an electric hybrid at nearly every four-way stop.

At the time it felt like the true future of the automotive space was about hybrids and Toyota, a long-standing player and dominant manufacturer, seemed to hold the key to backing the competition into a low-emissions corner.

The area’s residents, who live in a state with regulations that favours cars with lower emissions and are arguably obsessed with being seen as “doers of the right thing”, embraced a tech innovation they didn’t even invent.

This, perhaps, seeded Silicon Valley’s interest in just how much traditional ideas about cars could be changed. Back then, it felt like we would all be driving something as nifty as the Toyota Prius by 2015.

Well, it’s now 2015 and many a Prius on Highway 101, running through the heart of the San Francisco Bay Area, don’t look quite as leading edge as they used to. Still, in many ways the large-scale adoption of hybrid cars certainly laid the groundwork for even more revolutionary vehicles, such as Tesla’s Model S, Silicon Valley’s automotive zeitgeist darling.

Tesla’s all-electric, wirelessly connected and autonomous-drive-capable cars can literally be refreshed with a software update. Yet another disruptive reality check for a slow-to-change automotive industry.

“Tesla’s very aspirational offer pushed the industry to invest seriously in the electrification of their portfolios. Alternative powertrains like fuel cells are also finally reaching the market,” says Demian Horst, programme director for transportation design at the Umeå Institute of Design in Sweden. “It is true the automotive industry moves quite slow, but that has a lot to do with the complexity involved in creating products which must perform in a very controlled set of legal parameters.”

Additionally, Mr Horst thinks digital and design innovation, as well as evolving consumer expectations, will give our cars a whole new purpose. “We update their software, and suddenly feel we have a fresh and more capable product in our hands. We see more concept vehicles now fuelling the discussion,” he says. “They will basically make greater use of all the technology and intelligence that is already packed in – radars, cameras, sensors and so on. This transition period is important to build trust in the technology. More radical solutions will follow.”

This was clearly a line of thinking adopted by Mercedes in early-2015 when it unveiled the F 015 Luxury in Motion concept car. Those who jumped in for a test drive quickly learnt that the driver’s seat was made to rotate 180 degrees. So too was the passenger seat, which meant those sitting in front could turn to face those in back, all while the car zipped autonomously through the streets. A small table of sorts popped from a centre console, at which Mercedes even suggested a busy commuter should be able to sit in traffic and do office work at a makeshift desk. If the driver decides to engage in the actual driving, a motion sensing screen allows commands to be input.

When the German maker invited the world’s automotive press to see and experience the F015, they did so at an old test-drive airstrip across the bay from San Francisco. It seemed an apt place to showcase a car that was more tech than traditional powertrain, and it was a shot across the bows of hometown heroes Tesla and Google, whose Android operating system has been adapted for some cars.

Mercedes says it was one of the first traditional automotive manufacturers to open a research facility in Silicon Valley in 1995. That’s probably why the brand feels it has the local kudos to be sure Apple and various other venture-backed competitors don’t get all the automotive press.

During the course of a few days, Mercedes gave journalists an immersive experience, ushering them through mini exhibits that meticulously explained not just the materials behind the car and its snazzy sci-fi look, but also what it stood for.

The German tour guides insisted that this car of the future wasn’t just autonomous and all-electric, but that it might also give something back to the environment through which it drives. For instance, at a stop the car would be “smart” enough to shine lights that could project a crosswalk on to the roadway in front of it, while on-board speakers tell pedestrians it is safe to cross.

The team also posited that owners may want a car that takes them to work, but then autonomously runs errands or provides Zipcar-like and Uber-like services while the driver’s not using it. Mercedes carefully constructed a narrative that seemed to be partially built on Zipcar and Uber’s car-sharing and ride-hailing concepts.

“We keep challenging ourselves and are not afraid to be the disruptor of our own business,” says Mercedes spokesman Bernhard Weidemann. Disruptor or not, the F015 is merely a concept; an honest attempt by a long-standing automotive juggernaut to address the questions its non-traditional cohorts are forcing it to answer. In truth, the real story wasn’t about Mercedes. The maker simply hosted a conversation about reframing the way we use our cars every day.

The public relations staff at the world’s major automakers used to ask journalists if they would be attending the motor shows in Geneva, Frankfurt and Detroit. Now those same people ask the auto critics and transport editors if they also plan to attend the consumer electronics shows in Shanghai or Las Vegas. And it’s no wonder. “We now expect that the experience with a vehicle will be quite similar to the one we have with our favourite gadgets,” says Mr Horst. That means people soon might rely on the car in ways we have never even imagined.

Cars, despite being a key investment many of us will make at least once in life, sit idle on average 96 per cent of the time. This means we actually need our cars less than one hour every day. So it’s not surprising that many disruptive startups think the sharing economy is the way to be sure our cars don’t sit idle. 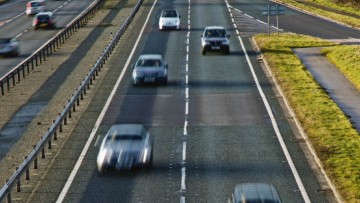 One such company is DriveNow. Launched in 2011 as a joint venture between car hire company Sixt and BMW, this Munich-based premium car-sharing company has operations in cities around the globe. DriveNow’s edge is that users drive a car and then simply leave it within a designated service area, not in a specific parking spot. As long as it’s parked legally, the car is ready for its next user.

People looking to hitch a ride and not borrow a whole car would be well served by French startup BlaBlaCar. Simply put, this service is essentially the Airbnb of the transport world. Drivers with empty seats on trips between two cities are connected via an app with digital hitchhikers heading the same direction. Those in need of rides split the cost of petrol and road fees, but not with a mark-up. Of course, BlaBlaCar takes a small fee. The company is growing fast and already has 20 million members in 19 countries. As for the name, it’s simply a play on a user’s ability to rate how “chatty” (blablabla) they’re willing to be with others on the ride.

But, if you’re in need of a whole car or not feeling chatty, DriveJoy’s offer is an interesting proposition. Again, a nod toward the Airbnb model of sharing the things you aren’t using, this service has set up a digital marketplace where those looking to hire or lend a personal vehicle can easily and safely do so. DriveJoy provides the insurance framework for the user, who meets the vehicle owner to exchange keys, and each party can write a review of the other.

Success for services such as DriveNow, BlaBlaCar and DriveJoy seem to be less about the public’s willingness to use them and more about government’s lack of response to the disruptive forces in the market. “A lot depends on policies and infrastructure. Once mobility needs are satisfied to a greater extent, people will have less need to own a vehicle,” says Demian Horst, programme director for transportation design at Sweden’s Umeå Institute of Design. If that’s the case, then BMW and all the other car makers are smart to be thinking about a future with these disruptive players in it.