The ubiquitous smartphone, leading the way for mobile technology, is on the cusp of transforming healthcare by increasingly involving patients in the self-management of their conditions

Mobile technology may sometimes appear a refuge for the gaming obsessive and fitness fans who can recite their personal bests for treadmill runs and oblique crunches more accurately than their children’s birthdays.

But its use as an effective diagnostic tool and early-warning system is gathering pace as we learn how to stay healthy by harnessing the power of microchips that can be smaller than a grain of rice.

The number of health apps has doubled in two years to more than 160,000 and 70 per cent of the UK population owns a smartphone that can now deliver precise and engaging advice from asthma to yeast infections. We are beyond a tipping point where it is easy, and safe, to locate and use digital health information.

The growth factors of self-management are clear: a creaking NHS and fears about later-life health have combined with heightened innovation and increased trust in online information to create a motivating potion. And everyone knows it. GPs are using digital monitoring and directing patients to supporting apps, and pharmaceutical companies are investing heavily – their number of apps jumped 63 per cent in 2014 compared with 2013. 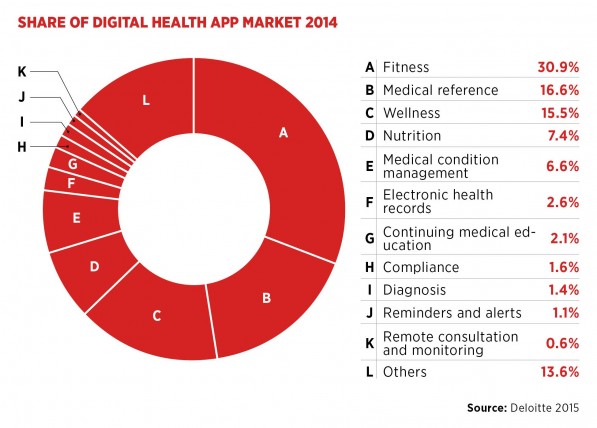 Taking charge of your health

“Digital’s ability to change the way people view their own health is just getting started as we move well beyond fitness and activity tracking to medical apps, such as those obtaining electrocardiogram, blood pressure or glucose readings to diagnosing ear infections in kids or sleep apnea in adults,” says Dr Eric Topol, a cardiologist and director of the Scripps Translational Science Institute, who wrote The Patient Will See You Now, which highlights the rising potency of patient empowerment.

“Those using these medical apps and hardware are feeling quite empowered and excited to take more charge of their care with respect to diagnosis and monitoring. Good examples are patients doing their blood pressure frequently through their smartphone and taking a much more active role. 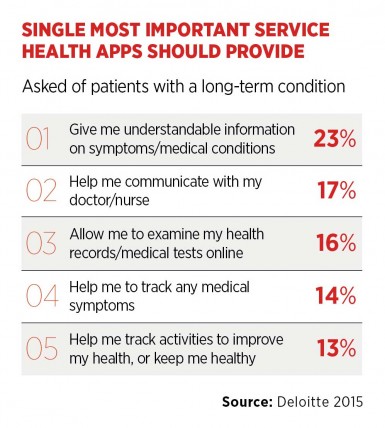 “When patients are doing their own routine observations and many diagnostics through their smartphones, the work for doctors will be decompressed, leaving more time for interpretation, guidance and formulation of treatment options.”

But Dr Topol believes the pace of change is not fast enough and that patients should have a civil right to own their medical data so they can become more involved in managing their health and treatment.

The government has fixed digital technology at the heart of its Five Year Forward View to reboot the NHS and minister for life sciences George Freeman told the recent NHS Expo in Manchester: “We need to transform healthcare in the NHS from a 20th-century model in which health is something done to you, to a 21st-century world in which we empower people to take more responsibility over their own health and life choices.”

He predicts the UK’s digital health industry will grow by nearly £1 billion over the next three years, but the amount it shaves off public expenditure by encouraging people to manage their conditions without seeing their GP is just as important. The NHS is facing a funding crisis with an additional £5 billion needed by 2018 and a further £30 billion by 2021 to cope with rising demand from an ageing population.

Boosting the nation’s health economy is valuable, but people still need encouragement and guidance to pick up their smartphone and log on rather than dialing the GP receptionist at the first sign of a snuffle. There are an estimated 165,000 apps already available in an arena dominated by lifestyle, fitness and wellness – the choice is bewildering.

If you have something on your wrist on a smartphone app that can give you readings and advice at the touch of a button, it is easy to manage your health

Initiatives from the Department of Health, which is exploring a kite mark system, and the European Commission, which created the European Directory of Health Apps, will provide signposts and GPs can underscore which app to choose.

“Doctors are increasingly recommending health apps to help people understand the impact of their behaviour,” says Karen Taylor, director of Deloitte’s Centre for Health Solutions. “If you are diagnosed as a high risk for cardiovascular disease or have had a heart attack or atrial fibrillation then there is a clear incentive to do something and advances in digital health have made it easier to track your condition in real time.

“If you have something on your wrist on a smartphone app that can give you readings and advice at the touch of a button, it is easy to manage your health, and we have seen notable changes of behaviour in some groups.” 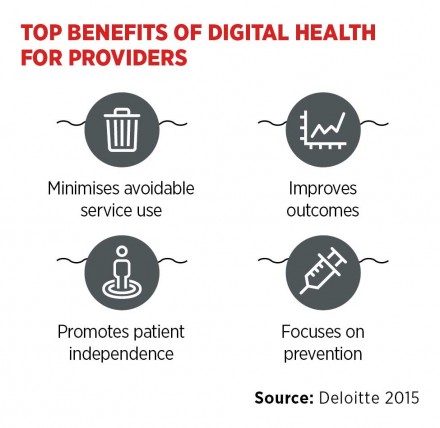 But she adds there is still a huge task to connect with the hard-to-reach groups of society, which have been impervious to healthcare advice. The challenge is to take digital beyond the groups who are comfortable with changing their health regime and improving their fitness.

A survey by Patient View notes that 69 per cent of the public rate trust as the most important aspect of online health information delivery, followed by ease of use at 66 per cent and data safety at 62 per cent. The entrance of tech giants Apple and Google into health is expected to improve trust ratings as their devices start to make a difference. The new Apple Watch has already been credited with alerting a wearer to his dangerously high heart beat in time for life-saving treatment.

“There is increasing evidence of improved outcomes from using technology and that will drive it even further,” says Taylor, co-author of Deloitte’s 2015 Connected Health report. “Digital startups are now bringing clinicians together with app developers as it is clear they will not endorse a product unless they are involved or engaged in developing the technology.

“But doctors are becoming savvier at using technology and, although there may be some concern that their professional knowledge may be undermined, we still need clinicians. If you are having a heart attack, then no number of apps is going to stop it – you will need clinical intervention.”