Until the financial crisis banks had enjoyed decades of growth unencumbered by the disruption seen in the newspaper, telecommunications and music industries.

During the good years banks’ profits soared and, while they embraced customer-facing internet and mobile apps, the foundations, processes and technology on which banks are built, despite billions spent on technology, would look familiar to those who worked there in the 1970s.

UK banks now face the perfect storm of significant technological advancements plus a regulator and government that want to foster innovation, and an ever-growing disillusionment of banking customers to banks’ offerings.

In recent times the UK has been hailed as a global leader for a new type of company called a “fintech” which combines financial services, technology, and innovative processes and customer experiences to compete with traditional banking products.

Companies such as Nutmeg, TransferWise, MarketInvoice, Mondo Bank and their kind, offer a genuine alternative to the major banks for financial services. These fintech companies have the advantage of starting with a blank canvas and standing on the shoulders of advances in technology brought in the internet and smartphone age.

Fintech companies are now breaking from the pack, and highlighting the depth and seriousness of the technological and cultural deficiencies that most banks suffer.

It’s important though not to see fintech as some sort of banking panacea which will right all the banking wrongs. As recent revelations around Lending Club have shown, there are downsides to fintechs, although it’s worth noting banks have not been immune from controversy in recent years. However, generally speaking, fintech is leading the charge for disrupting how financial services are created and delivered to customers.

Key to the success of fintech has been the use of APIs (application programming interfaces). Think of APIs as a set of rules that computer programs can follow to communicate with one another. Imagine a plug and plug socket; APIs offer a standard way for two bits of software to interact with each other across the world.

Whole companies have been created off the back of integration of great ideas and APIs that others have exposed. For example, if you’ve ever used Rightmove to look for a property, Rightmove didn’t build the map that you use to find your property. Google did. Rightmove then added their own properties over the top of Google’s maps via API integration. 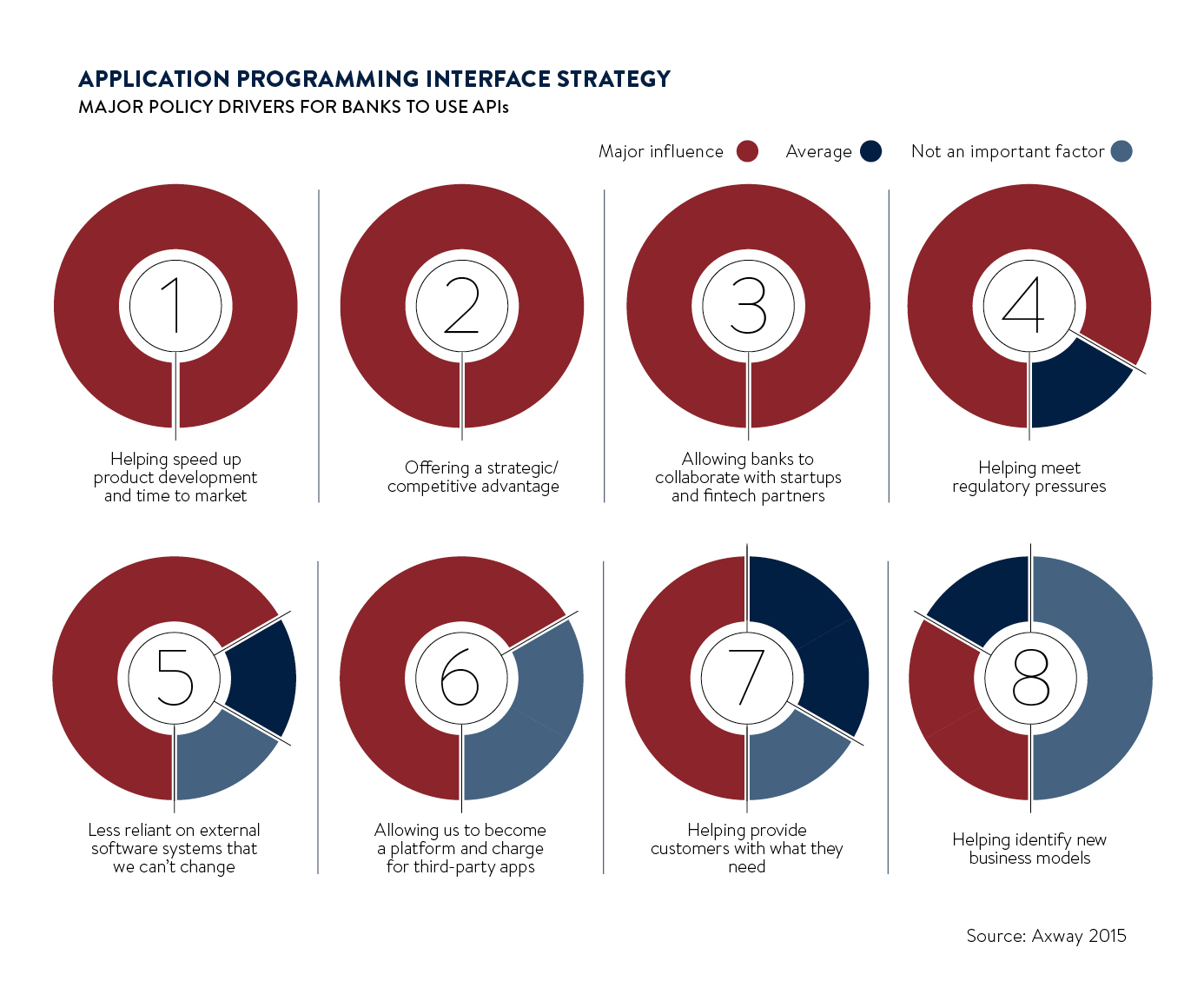 The use by banks of internal APIs – those for internal development – is increasingly becoming common as they try to drive speed and cost effectiveness into traditional legacy systems. But open APIs – those exposed to allow third parties access and development – have been reserved for banks that have reached the right level of maturity for new ways of working.

This reluctance to adopt open APIs has been a major driver for the slow evolution of banking across Europe and has led to the European Commission stepping in with the revision of the Payment Services Directive (PSD). While the aim of the original PSD, adopted in 2007, was aligned with the bigger economic vision for the EU, namely to create a single market for payments, PSD2 has a very different agenda.

In short, PSD2 mandates into law in December 2017: third-party access to accounts whereby e-commerce providers can take online or mobile payment directly from a consumer’s bank account without going via intermediaries; use of APIs to enable payment by directly connecting the merchant and the bank; and the ability to consolidate account information in a single portal. In the latter, an API enables a new type of financial services company – an account information service provider or AISP – to aggregate account information to let consumers with multiple banks view all bank details in one portal.

For banks that currently sit in a position of significant power, PSD2 is likely to cause a major change with the departure from a hub-and-spoke model, which has traditionally governed the relationship between centralised data and the internal distribution channels. Within Europe, PSD2 and the rise of fintech offer a true vanguard moment for traditional banks.

Smart banks getting ahead

Banks now have the opportunity to become platforms, connecting, curating and controlling these new services offered by fintech. This would in turn allow them to drive real growth in their business. Or, if they lose control, the banks face the real risk of becoming separated from their customers by the new breed of fintechs that are creating their own intelligent platforms which could relegate banks to utilities.

Bad decision-making at this critical point could see banks facing the real prospect of becoming like mobile phone networks or interchangeable, commodity infrastructures, and by shying away from this new world, they may inadvertently make their worst fears become a reality.

The smart banks are trying to get out ahead of these enforced changes and bring their APIs to markets in a controlled fashion. Many, like Barclays for example, are creating sandboxes to allow developers in a non-production environment to use their APIs with a view to bringing the newly developed ideas to their customer bases.

It has become almost the expected cliché at any self-respecting banking and fintech conference that someone would say something along the lines of: “Uber, the world’s largest taxi company, owns no fleet. Airbnb, the largest accommodation provider, owns no real estate. And Facebook, the media owner, creates no content”.

These companies have grown exponentially, scaling their business models, embracing new technologies, and creating platforms to cover more geographies and locations than even the largest global banks.

At this inflection point for banks and their competitors, might the future of banking over the next decade be that the largest banks on the planet will be the ones with no products and no customers of their own? We will see.

UK-based Mondo Bank makes no secret of its longer term intention to become a marketplace. While current focus has been on creating services for everyday banking, Mondo sees the integration with fintech as an obvious step. The bank intends to give users the power to choose, based on price, convenience and service, from a range of services not created by them.

Berlin-based SolarisBank is a bank-as-a-platform (BaaP) enabling fintech companies to take their services to market via Solaris as a fully licensed digital bank. The bank is looking to offer a full range of financial services aggregated, via application programming interfaces or APIs, into one uniformed service to the customer.

German startup Number26, which has launched a banking app across Europe, has integrated TransferWise via their API. TransferWise offers an easier way for customers to transfer money abroad cheaper and faster than a typical bank. TransferWise launched an open API allowing others to integrate it into their core products.

APIs have enabled Fidor to launch cost efficiently while providing an holistic banking experience to its clients by integrating services such as international money transfer, crowdfinance and peer-to-peer lending. Fidor has developed online technology enabling telecoms, banks, retailers and fintechs to launch their own digital banking offerings via its APIs.