It can be hard to take golf fashion seriously when the sport’s most revered item of clothing is a blazer that looks as if it has been stitched together from the green baize from a snooker table.

That is not to decry the craftsmanship of Hamilton Tailoring Company of Cincinnati, the company that has produced the green jackets for Augusta National Golf Club since the 1970s. Only Augusta members and winners of the US Masters – the first major of each golf season, held in April at the Georgia club – are presented with the single-breasted, woolen green jacket, embellished with three brass buttons. But it is just that its emerald-green colour – Pantone 342 – is hardly next year’s black. 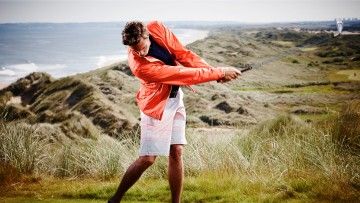 To Masters devotees, however, which includes the vast majority of people with any interest in golf at all, the splendour of that green jacket never dulls. This is the problem with golf, a sport of ancient history and royal traditions, that while it tries to look forward and modernise, it is still perceived by some as being stuck in the past.

“One of the best things about golf is this fusion of fashionable trends and popular culture, with iconic components that hark right back to the beginning of golf,” argues Bob Philion, president and chief executive of Cobra Puma Golf, one of the companies that is leading golf fashion in the 21st century. “That heritage adds to the options for us as a golfing brand. It’s great that golf has those iconic elements.”

Global sports giant Puma entered the golf market in 2006 and the company’s success is indicative of sports giants moving in on the “auld” game. Labels such as Puma, adidas and Nike have become increasingly dominant in dressing golfers both on tour and in the Sunday Stableford over the past 20 years. Golf’s diamond patterns and tartan trim – so often ridiculed – have been succeeded by influences from other sports, featuring blocks of bright colour, technical fabrics, slim-fitting cuts and slim-looking stripes.

But while golf apparel has caught up in styling and performance, the sport’s participation numbers are falling behind. Sports Marketing Surveys Inc. has reported that the number of people playing golf in the UK has dropped to below 3.5 million for the first time in 15 years, to 3.36 million this year.

“We view what is happening in the industry right now as a tremendous opportunity for us,” says Cindy Davis, president of Nike Golf. “We have a view at Nike that when there is chaos, typically there is also opportunity. We think there is the opportunity for leadership to change within the industry, if you bring the right innovation and deliver it to the consumer in an interesting way.”

Nike Golf dresses current world number one Rory McIlroy from head to toe, as it has done with Tiger Woods since the former world number one turned professional in 1996. Nike also dresses leading golfing women, such as American Michelle Wie and Denmark’s Suzann Pettersen, while Puma’s bright colours are modelled by US stars Rickie Fowler and Lexi Thompson.

Nearly 20 years ago, it was a marketing masterstroke of Nike and Woods for the 14-time major winner to only wear red shirts for the final rounds of tournaments, and Puma has refreshed this concept through its own poster boy Fowler, who reserves bright orange for final rounds. A little unkindly, Irish commentator David Feherty has described Fowler as “a parking cone with hair”.

“You should hear what he says off-air. They are even funnier,” admits Fowler, who wears orange in recognition of Oklahoma State University, where he played golf for two years before turning professional, and where all sports teams proudly wear orange.

The thing about Fowler is that he doesn’t look like a golfer. This 25 year old from southern California looks as if he should be surfing in Malibu or skateboarding in Santa Cruz, yet he strides on to golf courses with outfits that are closely fitted, brightly coloured and carefully co-ordinated, from his wide-brim caps to the spikes on the soles of his shoes.

“From day one we saw that golf has a high ‘shake-up’ factor because it is a traditional sport and at times it can get quite stale,” says Puma’s Mr Philion. “With the right guy – and Rickie Fowler is certainly one of them – you can cut through the clutter pretty quick and make a difference.

“Rickie embodies everything we are about. It starts with world-class performance, and then Rickie has a style and swagger that is certainly unique – it separates him from the pack. Rickie is a perfect match for what we want to be within the sport. Tour players become the faces of brands and we are thrilled that Rickie has become the face of Puma Golf.”

The colour Fowler brings to tournaments is on both sides of the ropes, as his fans dress in orange wherever he goes, and some kids take their mimicry so far as to wear stick-on moustaches.

“I see room for optimism,” Mr Philion concludes. “If you look at the past 20 years, golf is still in a good place, even if it is going through a correction right now. There is an enormous group of consumers who are interested in the game and it is up to us as an industry to engage with them, and to make the game more fun and more hip, and to adapt to a modern lifestyle.”