Britain’s biggest companies continue to give generously to charity, yet they are sometimes perceived to be sitting on their hands – and wallets – as Dina Medland reports

In the wake of the financial crisis, a spate of governance scandals across industry sectors has contributed to a fundamental erosion of public trust in business. Against this backdrop, the remit of corporate philanthropy is in danger, if handled badly, of becoming a “poisoned chalice”.

Not only does the general public at times disbelieve what it hears business say about its philanthropic activity, but more fundamentally, it may hear what “it expects to hear” rather than accept what is based in reality. Many people would be surprised to hear that the FTSE 100 gave £2.5 billion to good causes in 2012 – a £1.2 billion rise since 2007 – despite the economic downturn.

In a recent study, the Charities Aid Foundation (CAF) highlights a clear discrepancy between the public’s perceptions of corporate giving by the FTSE 100 and the reality.

Only one in five or 21 per cent of British adults thinks that more than half of the UK’s 100 biggest companies donate to charitable causes in a typical year. Some 51 per cent think half or less than half of companies donated and 28 per cent simply do not know, according to the study. “In fact, reviewing annual corporate responsibility reports for the FTSE 100 shows that in a typical year, at least 98 of the 100 companies reported making a charitable donation,” says CAF.

Industry sector has also become critical to the public’s perception of philanthropic behaviour. The study shows British adults believe the UK’s most charitable FTSE 100 companies in terms of donations are within the consumer services sector (51 per cent), followed by consumer goods (33 per cent). But the figures on percentage of revenue donated over six years and total donations over that time clearly show healthcare leads, followed by basic materials, financials and telecommunications.

“Confusion is potentially fuelled by the high brand profile of these consumer-facing companies and, in many cases, their very visible fundraising activities. The reality that such activities are driven largely by employee and/or customer donations, rather than money given by the company in its own right, is clearly not fully understood by the general public,” says CAF.

To put it another way, a company’s philanthropic activity, which can be a key means of engaging both shareholders and wider stakeholders including its own employees, may be failing in its purpose.

The confusion is perhaps unsurprising when corporate giving reporting among the FTSE 100 is neither consistent nor comprehensive. “Only half of donations in a typical year are accounted for by type, with only a minority of companies detailing their community investment spending,” CAF says.

Company philanthropic activity, which can be a key means of engaging both shareholders and wider stakeholders including its own employees, may be failing in its purpose

CAF also has a vested interest in highlighting, as the study does, the potential positive impact of charitable giving. “Businesses should be communicating how they are integrating a clear social purpose into the core of their business and the role that corporate giving plays in delivering sustained positive outcomes,” according to Klara Kozlov, its head of corporate clients.

The work of advising  business on its philanthropic activity is well developed in the United States, but in the UK there are still only a handful of players. The largest of them are charities, including CAF, New Philanthropy Capital (NPC) and Business in the Community, that see themselves as “think-tanks” or “thought leaders”, offering consultancy services to companies. Corporate Citizenship, which is part of Chime Communications, also offers such services.

Looking beyond the UK to international philanthropic trends and collaborative ideas is one way forward. A report published earlier this month from NPC recommends ten philanthropic innovations from around the globe. It suggests ways in which “new and improved” philanthropy could be introduced to the UK to drive up investment in social causes and make better use of money already invested. 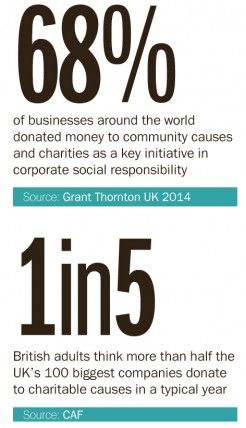 “Big donors here should be getting together to collaborate, which doesn’t happen nearly enough, or to use new technology to map the areas of greatest need which they might tackle. It takes a bit of nerve to adopt new ideas, but the world is changing and UK philanthropists can’t afford to be left behind,” says Plum Lomax, deputy head of the funders team at NPC and one of the report’s authors.

Alongside finding new ways to address philanthropic giving, some UK companies are wrestling with the issue of connecting their activity effectively with the widest possible sphere of relevant stakeholders in their business. In an embattled financial services sector reeling from reputational damage, the need to get it right is particularly acute.

“There is a huge amount being done, but corporates find that if they talk too much about it they will be branded as ‘arrogant’ or ‘profligate’,” says Steve Wickham, director at The Giving Department. It is a relatively new boutique firm describing itself as “dedicated to helping business get more from the business of giving” and is increasingly working with companies in the financial services sector.

“You can use corporate philanthropy as an expression of the values of the business – a way of telling people what you are all about,” says Mr Wickham. He suggests there is still a huge amount of money donated to charity that suffers from what corporate advisers McKinsey once termed the “chairman’s wife” syndrome, implying decisions taken somewhat at random.

“If you’re going to do it, you need to make philanthropy work hard and form genuine partnerships that link shareholders – and wider stakeholders – back to the business,” he says. But he warns that long-term decisions on direction are critical to any business looking either for “myth busting” or image creation.

“Corporate philanthropy can be great as glue, but it also has the potential to be corrosive,” says Mr Wickham. Particularly at times of economic downturn, there is inevitably great potential for emotion around corporate giving – one reason why companies looking to their reputation are treading with care. 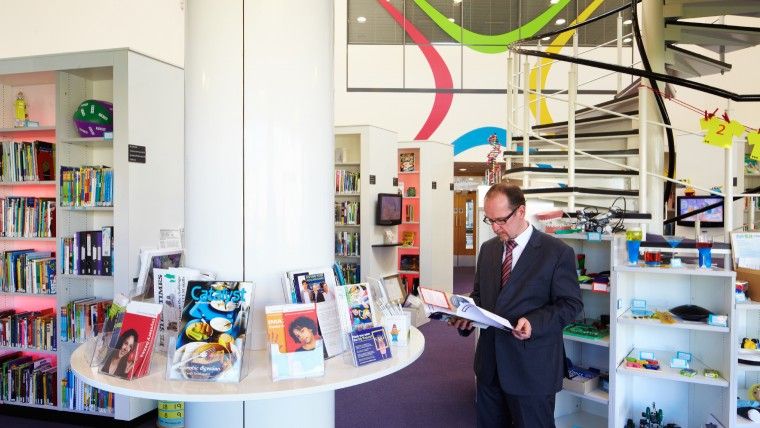 When it comes to corporate philanthropy in industry sectors around STEM – the acronym for science, technology, engineering and mathematics – the critical factor is seen as investing in the future through education.

As a sector it is integral to the success of the UK, which is the world’s sixth largest manufacturer with engineering turnover of around £800 billion a year, according to the National STEM Centre.

As the UK government has ramped up both initiatives and investment for the sector, this is changing. Earlier this year a scheme to provide professional development for science teachers and technicians received a renewed commitment of funding of more than £22 million over the next five years from the Department for Education, the Wellcome Trust, BAE Systems, BP, Rolls-Royce and the Institution of Mechanical Engineers.

This scheme, Project ENTHUSE, was launched in 2008 with joint commitments totaling £27 million. It has already provided more than 17,000 bursaries for science teachers and technicians to participate in high-quality residential professional development courses delivered by the National Science Learning Centre in York.

Improved science teaching is believed to be key to the turnaround in the decline in the number of students taking sciences and mathematics at A level and to the rapid rise in entries at GCSE-level sciences.

It is not just a UK problem. In the United States, the shortage of STEM graduates has been deemed of particular concern to the pharmaceutical industry. Nearly one third of the industry’s employees who make pharmaceutical products are in a STEM-related job. That’s about five times higher than the average share of STEM-related employment across the economy, according to the Pharmaceutical Research and Manufacturers of America. Mergers and acquisitions activity in the global pharmaceutical sector has recently resulted in a heated debate in the UK on the protection of valuable research and development.

Oil and gas companies too are increasingly aware of the need to promote greater awareness and interest in STEM as they look to the public’s perception of how they operate. BG Group, for example, began supporting STEM education in some of the countries in which it does business in 2011. Apart from the UK, its initial focus is in Brazil, but it says it is rolling out the programme “as opportunities arise”.

BG Group is also a founding supporter of The Queen Elizabeth Prize for Engineering, a prestigious international award, with a prize of £1 million. This is an award for an individual or team of up to three people directly responsible for advancing the positive application of engineering knowledge.