“I was given 12 months to live. That was three-and-a-half years ago,” muses Adrian Webb, as he discusses his stage-four melanoma diagnosis. The 51-year-old distribution manager from the West Midlands had limited treatment options, but jumped at the chance to take part in a Cancer Research UK clinical trial of a personalised medicine specific for a particular genetic mutation.

“As a result of these tailored drugs, I went from having one year to live to remission. It’s groundbreaking,” he says. “Personalised medicine is working and saving lives – I’m evidence of that.”

Mr Webb is part of a medical revolution; a shift from inefficient one-size-fits-all drugs to niche-busting personalised medicine that matches patients to drugs via diagnostic tests and biomarkers. Its aim is to improve outcomes and reduce side effects.

This isn’t a new concept – breast cancer drug Herceptin (trastuzumab) led the way in 1998 – but with scientific advances and new technology, more diseases are becoming subject to tailored treatments. 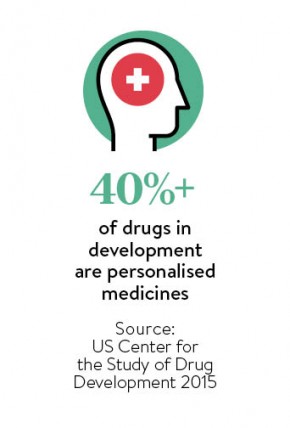 Already more than 40 per cent of drugs in development are personalised medicines, a 2015 study by the US Center for the Study of Drug Development at Tufts University estimates. And over the next five years, this is forecast to increase by 69 per cent.

The driving force has been the completion of the Human Genome Project in 2003, when human DNA was fully sequenced. Now genome sequencing is cheaper and easier, explains Dr Bertalan Mesko, the medical futurist at medicalfuturist.com. “Analysis transforms my DNA information into practical data,” which drives drug discovery, diagnostic development and tailors medicines to treat specific mutations, he says.

Cancer drugs have been the mainstay of personalised medicine, but new genetic insights mean a new era of personalised medicine has arrived, where any disease can be a target for a tailored therapy. In the future, there will be personalised treatments for diabetes, heart disease, Alzheimer’s and obesity, among others. Both the UK and United States are investing heavily in this research.

The role of personalised medicine is simple – it seeks to cut down unnecessary and often expensive treatments that don’t clinically benefit a patient, and might even cause them harm, says Tony Whetton, professor of cancer cell biology at the University of Manchester and director of the Stoller Biomarker Discovery Centre. The idea is to target the right treatment to the right patient at the right time. This will improve health outcomes and reduce healthcare costs.

With this in mind, the personalised medicine of the future will transform how healthcare is delivered and how diseases are managed. Within just one generation, healthcare, as we currently know it, will have changed, says Simon St Clair Carter, medical director and consultant urologist at The London Clinic, a private hospital and charity.

For instance, he has no doubt that routine genetic screening at birth, or even before birth, will occur in a bid to catch diseases early, prevent them from occurring and to tailor treatment accordingly. “Our genetic information will be as fundamental as knowing our national insurance number,” he says. Such a move will allow the development of even more precise drugs tailored to our individual genetic make-up and other personal characteristics.

Dr Mesko agrees: “All trends and developments point in the direction where cheap whole genome sequencing becomes possible – probably in the next decade.”

Genomic testing and disease profiling is already offered by some companies and hospitals, but as the cost of the technology – currently around £1,000 – decreases, this will become more widespread. Demand for genetic screening and personalised treatments will increase as knowledge develops and targeted medicines improve, putting pressure on governments to respond, says Mr St Clair Carter.

Technological advances, in diagnostics, analytics and digital technology, will also transform personalised medicine. We can envisage a future where technologies integrate, seen already with the rise in wearables and remote monitoring devices.

Of course, there will be challenges along the way from filling in the scientific and regulatory gaps to addressing concerns around consent and data privacy, protection and use, as well as how this might impact insurance policies. But the biggest roadblock will be the healthcare systems themselves, says Jenny Taylor, associate professor and programme director, genomic medicine theme, at the University of Oxford’s Biomedical Research Centre. “For healthcare systems, the challenge will be moving from a population-based strategy,” she says.

Indeed, anything is possible. As Mr St Clair Carter concludes: “The future is here – we just don’t understand it yet.”

Personalised medicine is already here with many advances in developing targeted therapies in cancer. But now interest is turning to accelerating these efforts. In Manchester, a new research centre opened its doors in June to do just that.

The University of Manchester’s £18-million Stoller Biomarker Discovery Centre, developed in partnership with life sciences technologies firm SCIEX, will identify biomarkers of disease risk, diagnosis, response to therapy and prognosis for cancer, psoriasis and arthritis, among other diseases. 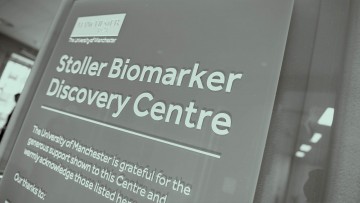 Biomarkers are molecules, traits or images, such as proteins in blood or urine samples, which can be measured. They are essential for the development of personalised medicine, and will be the future of healthcare to produce tests and treatments so individual patients can receive the right medicine at the right time and dose, says professor Tony Whetton, director of the Stoller Biomarker Discovery Centre.

“In the future, we need biomarkers to define diseases more accurately, discover more drug targets and to determine response to therapy. As we come to understand more about diseases, we are in a position to offer targeted therapies to a far greater extent than we have done in the past,” he says.