Companies with expensive defined benefit pension schemes have a number of options to cope with their liabilities, writes Chris Panteli

The joke once went that British Airways was a pension fund with a small sideline in air travel, being a £2.2-billion company with £15 billion in pension liabilities on its books. When the calamitous state of its defined benefit schemes threatened its merger with Spanish rival Iberia in 2010, BA understandably failed to see the funny side.

So, as part of a raft of funding improvements, the company took out a £1.3-billion pensioner buy-in policy with Rothesay Life, the insurance arm of Goldman Sachs, protecting the scheme’s payments to retired members from interest rate, inflation and longevity risks.

Although few schemes find themselves in quite the same predicament as BA, pension de-risking has become big business in the UK. Saddled with growing deficits swollen by volatile equity markets, low-yielding bonds and members enjoying ever-increasing life expectancy post-retirement, companies are increasingly looking at ways to reduce the risks that come with running a defined benefit pension fund.

There are a number of ways to reduce pensions risk through the use of insurance or bulk annuity deals. The nuclear option is a full buyout, which is the Holy Grail for many employers as it moves all responsibility for the pension fund off company books and over to an insurance company.

Such drastic action does not come cheap and is beyond the reach of many pension funds. This is where a buy-in enters the frame. As was the case with the BA deal, a buy-in is an insurance contract held by the scheme trustees as an asset of the scheme. It pays a monthly income to the trustees who then pay it on to the members covered by the contract. 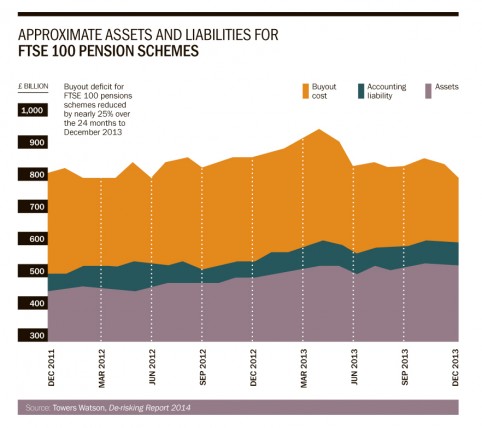 Buy-ins are, therefore, the most common form of bulk annuity deal and can be an ideal stepping stone towards full buyout, says James Mullins, partner and head of buyout solutions at consultants Hymans Robertson.

“What many companies are doing is starting with that first buy-in, then adding to it. Through a series of three or four buy-ins over the next ten years or so, they will get to full buyout. By doing it in stages you can also capture some great pricing along the way,” he says.

After a slump during the financial crisis, the bulk annuity market is back and booming, with more than £7 billion of business written last year. The £2.5-billion partial buyout announced by automotive safety firm TRW in November – the largest deal of its kind in the UK – pushed this year’s volume of business to more than £10 billion and counting.

David Collinson, head of strategic development at Pension Insurance Corporation, believes that figure could double in 2015. “Is there scope for it to reach £10 billion to £20 billion next year? Absolutely,” he says. “It depends on how many very large funds transact.”

The nuclear option is a full buyout, which moves all responsibility for the pension fund off company books and over to an insurance company

This growth will in part be spurred on by the arrival of new providers in the market. The decimation of the individual annuity business in the wake of the March Budget – new pensioners no longer have to buy an annuity with their pension pot – has left several big insurance groups eyeing up the bulk annuity market as an alternative source of income.

Mr Mullins says this increased competition can only benefit pension funds. “You’re going to see some very established household-name insurance companies enter into the bulk annuity market, which I think is really good news as it will keep prices keen,” he says. “We think the next 12 months is going to be the most competitive period ever.”

For schemes not ready or able to go through a buy-in or buyout, an increasingly popular option is fiduciary management, which involves outsourcing some or all of the pension scheme’s investment decisions to a third party. The trustees make the strategic investment decisions, while the fiduciary manager is responsible for the day-to-day investment choices necessary to make that strategy happen, usually through manager selection.

This practice, which is also known as delegated or implemented consulting, is proving hugely popular among smaller schemes. Research by KPMG found the full-delegation market grew by 44 per cent in terms of the number of mandates in the last year, with 89 per cent of all UK mandates managing less than £250 million.

At a time when markets are volatile, Europe is staring at a deflationary period and quantitative easing has further depressed the yields of government bonds, pension schemes need all the help they can get and see an outsourced option as offering better value to their members than they can deliver internally.

As with buy-in and buyout, the decision to outsource is not a simple one. It is vital schemes understand that considering this route will require them to undertake extensive research before they make a decision.