Ask the baby-boomer generation about growing old gracefully and the collective reply is “No thank you.” This 50-plus age group are embracing later life with a youthful vigour. Age is becoming 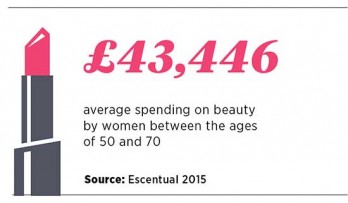 They may feel a decade younger, but it doesn’t automatically follow that they have a desire to look ten years younger. “Not one respondent in our survey talked about the desire to get rid of wrinkles or achieve younger-looking skin,” reveals Imogen Matthews, publisher of Older Women in Beauty: The Golden Opportunity. “In fact, 63 per cent of the women accepted wrinkles are part of getting older; only 15 per cent wanted to look younger.”

While anti-ageing promises still resonate with the 45 to 55 age group, it holds less appeal with an older demographic. A Euromonitor survey of the 60-plus age group revealed 55 per cent used moisturisers without anti-ageing claims, compared with 35 per cent who used specific anti-agers.

“This is a generation who have lived through miracle promises so there’s realism about what can be achieved,” says Ms Clare. “They accept the changes that come with ageing; they don’t want to battle against it. Skincare that promises to reverse signs of ageing is a turn-off. Instead, they want products that enable them to look the best they can and deal with their primary skin concerns, whatever their age.”

The product wish-list includes hydrating, nourishing formulas to comfort drier skins and restore luminosity, and stay-put make-up that doesn’t sit in the creases.

It’s a similar “enhancement” preference for haircare, with products that offer shine, volume and smoothing benefits to thinning or coarser grey hair. “These are the first modern, ageing women. They want authentic, light-touch colour that blends grey, rather than masking it like their mother’s generation,” says Josh Wood, creator of Marks & Spencer’s Guardian of Colour range. “They’re also increasingly embracing grey hair as a fashion accessory or opting for youthful darker roots and lighter ends.” Think Madonna, 57, or the age-defying Elle McPherson, 51.

With “beauty at any age” the new buzzwords, the industry is finally reaching for the opportunities this consumer demographic offers. No doubt they’ve noticed the numbers. By 2020 the over-50s will make up 50 per cent of the population and control almost 80 per cent of the UK’s wealth with higher than average disposable income, according to the Office for National Statistics.

They’re also avid beauty users, says Ms Matthews. “Our research showed that 75 per cent of women aged 55 to 64 use facial skincare daily, only dropping to 60 per cent in the over-65s. They spent an estimated £2.1 billion on make-up, skincare and toiletries in 2013, accounting for 45 per cent of the total market spend.” And unlike their brand-loyal parents, they seek out innovation and new products. 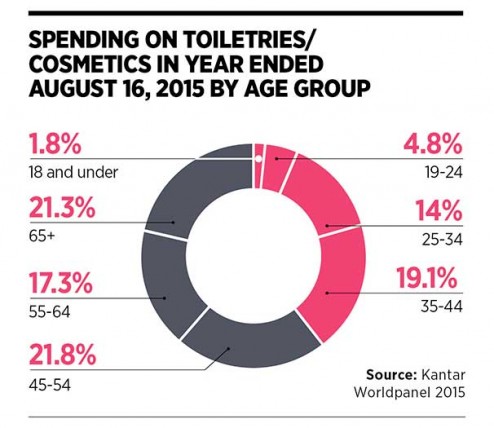 Brands embracing “ageless beauty” include Lancôme, which launched their Advanced Génifique serum with a #loveyourage campaign, encouraging women of all generations to upload pictures and celebrate their skin. Space NK’s current, highly-aspirational Timeless Beauty campaign features two models 30 years apart. “The campaign was prompted by the recognition that this older demographic represent a high proportion of our customers,” says Jessica Perfect, head of buying at Space NK.

“It was also a result of witnessing the evolution away from the potentially alienating anti-ageing terminology to a new lexicon that focuses on feeling good, and looking radiant and healthy.”

She points to the rise of niche brands, such as new skincare line VENeffect created by sisters Rebecca and Cecil Booth, one a hormone specialist, the other a beauty industry expert. It employs 100 per cent natural phytoestrogens to address hormonal skin changes and restore the skin’s youthful glow of vitality, known as the Venus Effect.

Changing the face of advertising

Space NK’s campaign is one of an increasing number featuring mature faces. Recent Nars make-up campaigns stared 68-year-old Charlotte Rampling and Tilda Swinton, 55. Yet the ultimate 50-plus pin-up it seems is Helen Mirren, 60, appointed as the face of the L’Oréal Paris Age Perfect range, after ranking the most appealing in a 9,000-strong survey by the brand. Not only is she seen as genuine, intelligent and glamorous, someone who looks good, if not better, with age, she’s also perfectly in tune with her peers saying: “I am not gorgeous and I never was, but I was always OK-looking and I’m keen to stay that way.”

While this increase in mature faces is applauded, there’s still frustration at the way this demographic feel they are reflected. A Mintel survey found 37 per cent of the 50 to 68 age group felt excluded in advertising, with 46 per cent saying they felt their age group was stereotyped. With many products targeted at this age group still advertised by 20 year olds, there’s a lingering cynicism it’s a marketing stunt, rather than a concerted effort to engage. 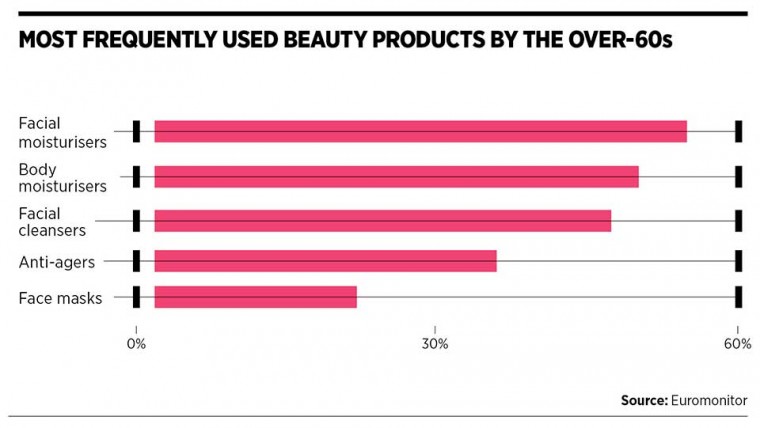 There is also a sense of frustration at being categorised into a single “old” group as soon as you hit 50. “Skin concerns and lifestyle needs change between 50 and 80, and they don’t feel this is adequately reflected,” says Ms Clare. “Yet their biggest annoyance was being patronised by mid-life marketers who are the same age as their children. They grew up through the 1960s so they prize youth. Many of our respondents read Grazia. They want to know what the 20-somethings are up to and be spoken to in the same way.”

Another stereotype the beauty industry falls into is portraying this group as technologically illiterate, yet in reality they’re embracing digital life. “Thanks in part to the readability of tablets, social media among the over-50s has increased by 30 per cent in recent years, with some retailers seeing up to 200 per cent increase in sales for the over-50s, partly driven by online purchases,” says Christian Eckley of My Market Insight.

They’re not only shopping for beauty online, but also researching products and recommendations. The two million YouTube hits for make-up artist Lisa Eldridge’s mature make-up tutorials clearly demonstrates the appetite, as does the increasing number of mature vlogs.

Beauty journalist and founder of The Beauty Know It All vlog for “grown-up” women, Nadine Baggott, explains: “At a university reunion, I looked around at all these successful 50-plus women, at the height of their careers, earning a fortune and realised the beauty industry wasn’t speaking to them. Yet they’d never been more in need of advice. They wanted to know what works and how to spend their money.”

It begs the question why has it taken so long for the industry to respond to this powerful demographic? It may be a case of fingers burnt with failed attempts to connect with this audience, says Ms Clare. “We need to engage with and understand this demographic for the highly sophisticated consumers they are. They travel frequently so appreciate easy-to-open-and-decant packaging. They want larger font sizes, but not at the expense of design. They’ve invested in their homes so they want it look good in the bathroom. They’d also appreciate age-appropriate consultants who really understand their skin and its needs,” she says.

Roisin Donnelly, Proctor & Gamble’s UK marketing director, concedes: “It’s our role to encourage women to celebrate their age and we haven’t always got this right in the past. A key finding in our research is that 50-plus women don’t want to be addressed any differently from their younger counterparts.  They value honesty, simplicity, quality and the sensorial pleasure of using a product, so we’ll be focusing in on these aspects. With Olay, we’re looking into future communications that will explore why every year is an opportunity to defy age and achieve the ultimate beauty victory – when nobody can guess how old you are.”

It sounds like this generation’s ultimate wish may soon be a reality.

“We are seeing a transformation of how masculinity is defined,” says Octavio Valdes, vice president of the Men’s Skincare Group at Estée Lauder Companies. “According to the 2013 TNS The Modern, Modular Man Global Initiative, 65 per cent of men in the UK said there was nothing wrong with spending time in the bathroom to make sure they’re looking good.”

So how does this play out in the 55-plus demographic? Mintel research shows this generation are less inclined to groom daily, but 43 per cent of the over-65s felt it was important to make an effort when going out. And there’s growth in this sector as Nivea Men attribute 40 per cent of their sales to the 55-plus age group, increasing year on year.

Deborah Gayle, managing director of The Refinery men’s salon, is also witnessing growth. “We’re seeing more men seeking out grooming and skincare for the first time in their 50s,” she says, attributing this partly to female pressure. “Women are increasingly looking after themselves into later life and expect the same of their men.” 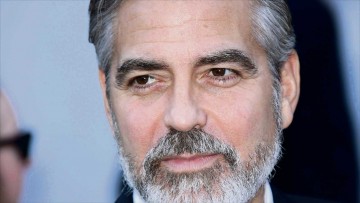 With the divorce rate increasing among the 60-plus generation, there’s more of an impetus to look good. There’s also a requirement to smarten up professionally. “In a competitive job market with younger candidates, a level of grooming is seen as a pre-requisite,” adds Ms Gayle. She also points to the “George Clooney effect” of older faces in advertising that mature men can relate to, such as actor Hugh Laurie, 56, for L’Oréal Paris Men Expert.

While more men are coming to the grooming market, they’re less sophisticated than their younger rivals. “The younger consumer is experimental and is purchasing products such as anti-blemish BB creams, eye creams, and sonic brushes,” says Mr Valdes. This can leave the market prone to trend-related sales fluctuations. Note the decline in shaving products sales due to the hipster trend for facial hair.

In contrast, the older market prefers simplicity with Mintel research showing 67 per cent of men over 65 want a basic routine. This desire for simplicity is well catered for by high-profile brands such as Clinique, Nivea Men, Dove Men+Care and L’Oréal Paris Men Expert, which offer multi-function products such as face/body wash and exfoliators, post-shave care and hydrators, and moisturisers with anti-ageing benefits.

Yet unlike the female or younger male market very few products are targeted specifically at the 50-plus demographic. With the male population of the UK predicted by Mintel to grow by more than 4 per cent by 2019, and the over-65s accounting for 10.5 per cent of the growth, there’s increasing opportunity for brands to target the silver foxes of the future.