Outsourcing was once synonymous with cost-cutting and job losses, but has now come of age as a valued service

Outsourcing has not always been regarded warmly by businesses or indeed by their employees. Often associated with cost-cutting and redundancies, outsourcing has not benefited from being mistakenly conflated with offshoring, whereby processes are shifted to low-cost markets overseas.

This negative image was illustrated by a survey published by the National Outsourcing Association (NOA), which­­ found that 22 per cent of people cited outsourcing as a profession they dislike.

In the last five to ten years, outsourcing has gone from being a dirty word to a common tool used by most mid-to-large-sized businesses

However, the survey’s respondents also indicated that their opinion of outsourcing would improve with sufficient proof of the sector’s contribution to UK jobs and the national economy.

Recent figures have illustrated the value of outsourcing by both these measures. According to the Business Services Association, the outsourced and business services sector accounts for 9.3 per cent of gross value added to the economy and employs 3.3 million people in the UK. 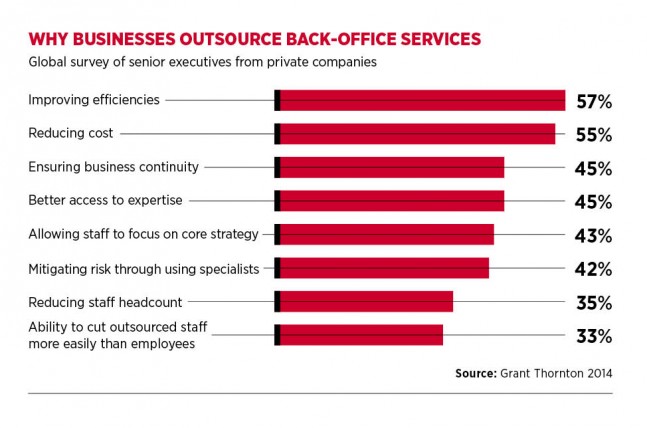 Growth is expected to continue across a wide variety of activities. For example, Deloitte’s 2014 Global Outsourcing and Insourcing Survey found that 26 per cent of respondents were planning to outsource elements of their IT function in the future, with 53 per cent already doing so.

As outsourcing has continued to become more prevalent, attitudes towards the sector have indeed begun to thaw. “In the last five to ten years, outsourcing has gone from being a dirty word to a common tool used by most mid-to-large-sized businesses,” says Punit Bhatia, head of business process outsourcing advisory at Deloitte.

Initiatives such as the NOA’s Outsourcing Works campaign, which aims to present a more accurate picture of the benefits of outsourcing, may have helped to raise the profile of outsourcing. At the same time, the reasons for using outsourcing have begun to change, with some companies refining their views on the value that outsourcing brings to their businesses.

Not just a cost-cutting exercise

In the past, outsourcing was regarded first and foremost as a cost-cutting exercise, but for many companies, cost reduction is no longer the main reason for taking this approach. “While saving cost is still important, it has gone from being the primary driver to becoming a by-product of an outsourcing programme,” says Mr Bhatia.

This is backed up by research published by Grant Thornton last year. Improving efficiencies was cited as a driver for outsourcing back-office services by 57 per cent of business leaders globally compared with 55 per cent who cited cost reductions. Other common drivers included business continuity, better access to expertise and allowing staff to focus on core strategy.

While connotations of job losses have not helped the sector’s image, it is also evident that outsourcing can bring talent-related benefits. In practice, recruiting, training and employing in-house staff for every activity may not be the best solution for every company.

“Talent is core to most organisations, but the question is not always whether you can attract it, it’s more whether the business wants to invest in talent in an area that is not core to their business,” says Chris Stancombe, chief executive, business process outsourcing at Capgemini.

Mr Stancombe says companies choosing to outsource certain activities can access a broader pool of flexible talent across the globe. Employees working for the providers can also benefit. “For employees who join an outsourcing provider, they have the opportunity to broaden their experience in different service areas and across different sectors,” he says. “This amounts to greater development in their professional capabilities and improved career prospects.” 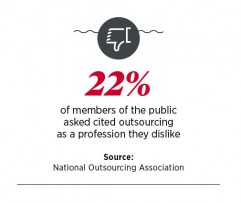 However, it should be noted that employees working for outsourcing providers do not necessarily benefit from better terms and conditions, at least where public services are concerned. Earlier this year, for example, a report published by the Smith Institute and UNISON, one of the UK’s biggest trade unions, found contractors were earning as much as 15 per cent less than the lowest paid council employees.

Outsourcing’s image may be improving overall, but for individual companies, experience can play a significant part in determining how outsourcing is perceived. For example, organisations which have more experience of outsourcing may have a greater level of trust in their providers than companies using outsourcing for the first time.

“Those companies which are less familiar with outsourcing tend to go into it more cautiously, so we need to build that trust to help them get the best out of the relationship,” says Mr Stancombe.

Other companies maintain that outsourcing is not the best solution for their business. “We’ve taken the decision to avoid outsourcing wherever possible and manage many of our key business functions in-house,” says Will Rees, co-founder of family business Direct Online Services, which specialises in solid-wood worktops. “This has been a core part of the business strategy since launch and, because our company has grown so quickly, taking this approach has helped us to keep tight control of costs.”

Nevertheless, with more companies expecting to outsource selected activities over coming years, it seems some progress has been made in addressing the negative connotations associated with this sector. Outsourcing may not be right for every company, but with fewer misconceptions surrounding the topic, companies will be better placed to choose based squarely on the facts. 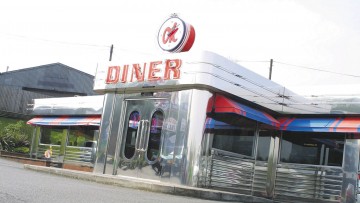 For Dafydd Poole, owner of UK-based American-style diner chain OK Diners, outsourcing all possible processes seemed like the natural choice following a management buyout from the Restaurant Group in 2001. “Because we’d run the division for a larger company, we could see that with all the different divisions and departments it was almost like outsourcing anyway – for example, the accounts function looked after seven different restaurant chains,” he explains. “Instead of employing people ourselves, we decided to take the same approach.”

The first step was to outsource finance to management accountancy firm Jugglers, which provides a complete range of management accounting services. As well as payroll, these services include a virtual head office function, answering a dedicated phone line as OK Diners and dealing with all mail. Since then, OK Diners has outsourced purchasing to a food buyer as well as a non-food buyer for utilities, furniture and equipment. Other areas which have been outsourced include health and food safety, human resources and marketing.

Mr Poole thinks that many directors are wary of outsourcing due to a fear of the unknown and concerns about a loss of control. “People also think that if they keep everything in-house, it’s more cost effective,” he says. “But I’d disagree. If you buy those services in, you don’t have to worry about premises, rent rates, holidays, sickness or recruitment. You have the reassurance of fixed costs that aren’t going to escalate over the course of the year.”

He concedes that outsourcing so many processes may be unusual in the catering industry, but says the approach makes perfect sense. “This removes a whole layer of day-to-day issues which would take me away from the core of my business and allows me to do what I’m good at,” he concludes. “I’m surprised there are not more small chains doing the same because many of them end up overpaying for little bits of service or soaking up time which could be spent more productively.”