The outsourcing industry is an increasingly important driver of the UK economy. According to the Business Services Association (BSA), almost 10 per cent of the UK’s workforce is employed in outsourcing, accounting for 3.3 million jobs. In the third quarter of 2015, £2.2 billion of outsourcing contracts were signed, an increase of 69 per cent on the previous year.

The BSA recently published research, conducted by Oxford Economics, which shows an increase in outsourcing of 1 per cent adds £2 billion in productivity gains to the UK economy each year.  For every percentage point that outsourcing grew between 1995 and 2013, GDP growth increased 0.37 per cent per year faster than it would have otherwise and productivity has increased faster by 0.12 per cent.

“The notion that businesses or governments should try to do everything themselves is as misguided as it is old fashioned. Bringing in experts simply makes sense,” it concludes.

As a global comparison, the UK is behind only the United States in terms of the strength of its outsourcing sector, according to Mark Fox, the BSA’s chief executive.

Dr Anthony Mitchell of the Hult International Business School, who has researched the subject, says of its development over the years: “The UK companies with their ‘liberal market economy’ approach were quick to outsource, favoured short-term cost-savings, but were also more flexible and agile. Radical changes were successfully negotiated with trade unions and suppliers to seemingly favour shareholders, and management were less constrained by institutional factors and capitalist constraints.” 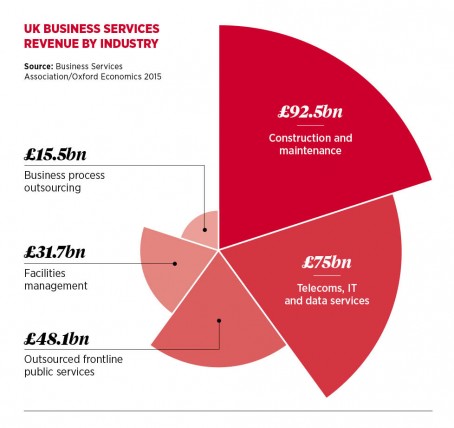 Despite this buoyancy, business process outsourcing (BPO) is often associated in the minds of the public with offshore call centres and a desire by companies to drive down costs at the expense of customer service.  It’s an image that the BSA’s Mr Fox is keen to dispel.

“Outsourcing is a big part of the economy and it’s not just about Indian call centres – it’s about companies running more efficiently and focusing on their core skills,” he says. “It’s a dynamic industry that’s not properly understood. It’s not just about cutting costs; it’s about better quality of service.”

Outsourcing companies themselves are also fighting back. Property Webmasters, for instance, which is based in Hartlepool, designs and builds websites for estate agents across the world and is keen to see the government’s idea of a Northern Powerhouse develop.  Unable to find talent locally, they outsourced to a British IT outsourcing company based in the Philippines called Cloud Employee.

“The public’s perception of outsourcing and the reality of what we do are two very different things,” says Cloud Employee’s co-founder Nick Hargreaves. “We’re supporting the growth of UK companies by providing them with dedicated staffing resources that would otherwise be unavailable to them. This enables them to grow the company so they can remain competitive and employ more people where there are local skillsets available, and also then have the time and resources to train fresh talent, be they apprentices or new graduates.”

According to Dr Aleksej Heinze from the Salford Business School’s Centre for Digital Business, outsourcing plays a particular role in boosting the fortunes of smaller companies.  “As a small business you need to be efficient at what you do and you can’t do everything at the same level of efficiency if you have a small operation,” he says. “Because of the complex nature of technology, there are often times when you can’t be an expert in everything. We’re getting to a level of digital outsourcing opportunities where small tasks, such as designing a logo, creating a PowerPoint presentation, could be done at low cost by experts.

“We’re getting more accustomed to the idea that we need things done quickly and there is no stopping digital communications at any time. Outsourcing is becoming a major opportunity for small and medium-sized enterprises to tap into resources and can help them to develop their competitive advantage.”

Independent research commissioned by Aspect, a software provider and carried out in August among organisations that provide BPO services, showed that 94 per cent of those asked believe the values of their organisation’s new business contracts are “higher to some extent” in 2015 than in 2014.  However, more significantly, around two thirds are planning to increase investment in technology, environment, processes and training.  As a sales point, a “skilled workforce” ranks, at 60 per cent, nearly as highly as being “cost effective” (62 per cent).

Having a skilled workforce

As the debate continues about the UK’s position as a low-skilled, low-wage economy, outsourcing companies are clearly investing more in training and development. One consequence of having a more skilled work force is that outsourcing companies will have to pay higher salaries, further increasing their contribution to the UK economy.

The Contact Company launched in Merseyside in 2006 and is now one of the largest independent contact centres in the UK, with more than 1,500 staff at peak times operating at two sites. Its remit has grown significantly over the past few years and its services now include customer call-handling, inbound sales and complaints, e-mail and social media queries, live chat and data capture. One client is retailer Rakuten, formerly Play.com, which has decided to “reshore” its services.

“Currently more than 95 per cent of the Contact Company’s staff are studying NVQs [National Vocational Qualifications], ILM [Institute of Leadership and Management] courses or similar and every staff member has a personal development plan,” says Asif Hamid, its chief executive. “Since launching, we’ve committed to re-investing at least 20 per cent of annual profits into training. So far that totals almost half a million pounds.” Technology is the key driver of the need to upskill, he says, and the costs of training are easily recouped.

Mr Hamid believes investment and staff training are the only ways to ensure outsourcing continues to contribute to the UK economy. “Outsourcing businesses must be looking ten years ahead, and identifying the challenges and opportunities,” he says. “The phrase ‘omnichannel’ is very popular currently, but if a business is considering how to meet demand for this, then it’s already too late. Future-proofing our technologies and systems is essential to stay ahead of the curve.”