Savvy employers realise that creativity and productivity are linked to feeling “at home” in the workspace, and are commissioning relaxed offices where staff can socialise and collaborate 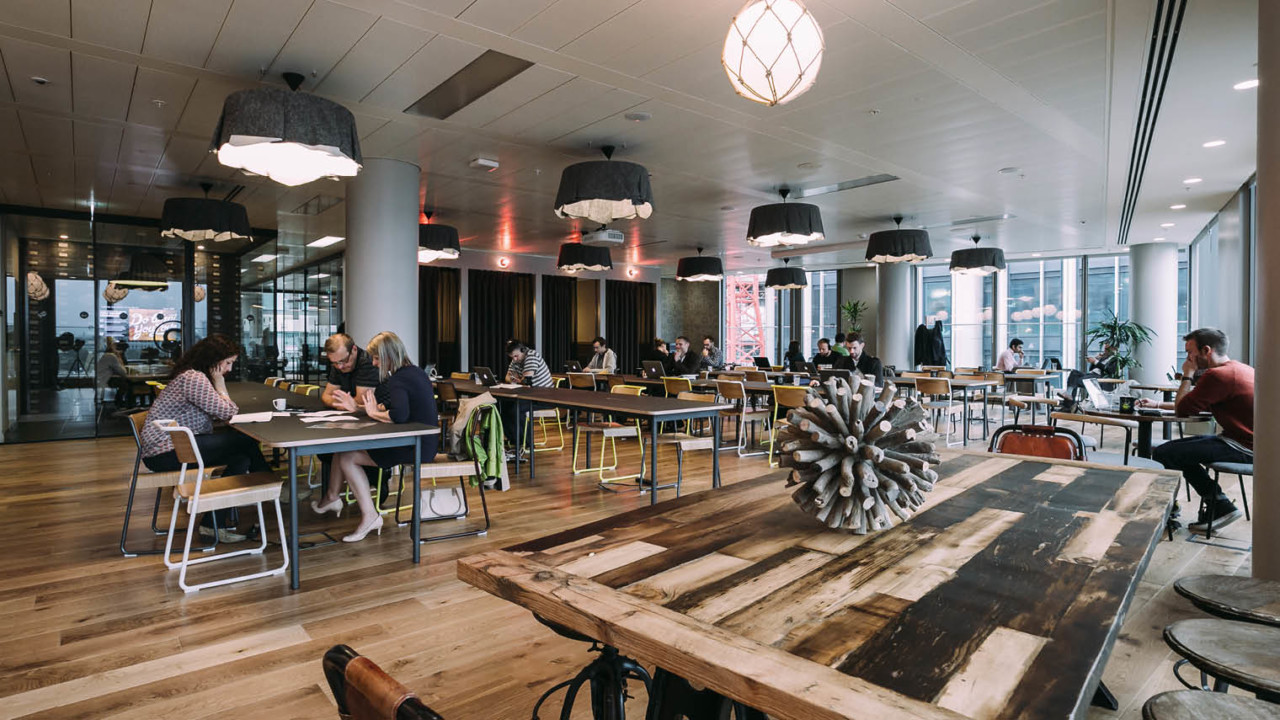 The distinction between working and socialising spaces is becoming increasingly blurred as office design takes cues from hotel lobbies, domestic lounges and cafés in an effort to create more enticing environments for workers.

Rows of private offices have long been done away with by many companies, and replaced with open-plan layouts that aim to reduce costs and bolster employee relations.

But now the banks of symmetrical desks, partitions and swivel chairs that have become the lack-lustre design vocabulary of the open-plan office are being cast aside in favour of plush upholstery, curated bookcases and leafy pot plants.

An evolution of the office’s open-plan layout is seeing large chunks of space dedicated to socialising and is encouraging workers to move away from their desks.

Graham Stirk of London-based architecture firm Rogers Stirk Harbour + Partners says that elements borrowed from the hospitality industry are now being seen as a valuable resource in offices.

Pockets of informal seating, coffee bars and telephone nooks allow employees to step away from their desk to carry out a task in a specifically tailored environment, while also opening up the opportunity for chance encounters between members of staff. In an age where so many discussions take place digitally, the immediacy of a face-to-face conversation can sometimes prevent an employee heading off in the wrong direction on an idea for weeks, he says.

“The concept of cellular working is becoming less required. The whole nature of mobility, how people move around and talk with each other, is where a great deal of decision-making takes place,” says Mr Stirk.

“One of the biggest, most amazing aspects of people working in these buildings is collective thought. This is what office working is – it’s about exploring and assisting intellectual capital.”

Design firm Gensler’s UK Workplace Survey 2016 found that more than eight million UK employees now work in open-plan offices, but rigid layouts forced almost 70 per cent to sit at the same desk with the same co-workers each day. These workers scored the lowest in terms of innovation in the nation and industry-wide survey, while those offered a boarder variety and choice of workplaces scored significantly higher.

With the average person spending the majority of their waking hours in an office, it makes sense for there to be more of an overlap between work, socialising and home environments, says Philip Tidd, the principal and head of consulting for Europe, the Middle East and Africa at Gensler.

Employees across sectors and generations are now seeking a stimulating “experience” from the office, not just a place to work, says Mr Tidd. ”Everyone’s talking about the experience economy and experience design. People want to have a great experience when they go to the workplace. We weren’t talking about that five years ago.”

Architects and designers are looking towards not only the hospitality and residential sectors for ideas, but also to the technology industry where experience design has played a significant role in office design for years. International design firm Hassell recently teamed up with specialist user experience studio FreeState to do just this.

Disruptive innovation that started in the tech industry has moved into the mainstream, driving businesses towards collaboration as a means of improving innovation

“Unlike hospitality clients, workplace clients never asked themselves what should the experience be like? One of the most significant translations of hotel design to office design is thinking about the total experience for the visitor from beginning to end – from the moment you enter to the moment you leave,” says Matthew Blain, who is a principal at the company.

“Traditional organisations now aspire to innovate and to do so they want to tap into the entrepreneurial sub-culture that exists in their own organisations but also to engage with a wider entrepreneurial pool of talent who often occupy co-working spaces. Disruptive innovation that started in the tech industry has moved into the mainstream, driving businesses towards collaboration as a means of improving innovation.”

Technology companies such as Google were among the earliest adopters of experience design for the workplace. But its initial approach, which saw the company including gimmicky design elements such as indoor slides and themed rooms in its UK offices, are being swept away by more sophisticated offerings.

Over the last five years, a deluge of co-working spaces opened across UK cities, targeting startup companies and freelancers seeking affordable offices. The sheer variety of users of these shared office spaces have forced their designers to create diverse settings within one building, ranging from the completely private to the deliberately social and noisy.

Receptions more akin to lounges are designed to create a welcoming and less office-like environment on visitors’ first impression, while folding doors can be used to open private meeting rooms to the room. Here, choice and adaptability of workspace are key.

“Technology companies like Google really planted the seed for this new way of working. Once other companies wanted to compete with the tech companies for talent, they had to come with more innovative ways to engage employees and respond to what people wanted in a workplace,” says Miguel McKelvey, who is the co-founder of one of the UK’s biggest shared office providers, WeWork.

“When we first started, we were trying to replicate successful residential and boutique hotel design to create something that felt like a welcoming and emotionally supportive environment. You want to give inhabitant options, many different ways to be in the space, to let them search out places to exist, rather than give them a set formula.”

WeWork runs 14 co-working offices in London and is seeing an ever-increasing demand for less structured workspaces, with members appreciating that productivity may not necessarily be linked to desk time.

The success of this more flexible model for office design is beginning to be measured in workplace surveys, which show that well-designed offices can have a positive impact on workers and in turn on the growth of their companies.

“One thing that’s being learnt from retail and healthcare is evidence-based design, basing design decisions on robust evidence. The tsunami of data, gathering techniques and technologies in the workplace, is enabling this and it’s a good thing,” says Tim Oldman, who set up the Leesman Index to measure how workplace design affects work productivity.

“Workplaces with outstanding collaborative, informal and social spaces are the ones where employees report the highest sense of pride, enjoyment and productivity. And these spaces are no longer the reserve of the tech giants or web startups. Banks, retailers and manufacturing companies are realising this and producing a new wave of socially cohesive spaces,” says Mr Oldman.