No more poverty with mobile money

For the last decade, the Bill & Melinda Gates Foundation has invested heavily in projects across the developing world to eradicate disease and illness. It has yet to succeed, but is certainly making a difference. For example, the number of children under five who die each year worldwide has almost been halved, while diseases, such as polio, elephantiasis and river blindness, have all but been eradicated. Now the foundation has moved on to a new focus – to wipe out poverty.

In his 2015 newsletter, Bill Gates says: “The lives of people in poor countries will improve faster in the next 15 years than at any other time in history.” And he places access to banking services near the top of the list for why this will be the case. What is it about banking that makes such a difference?

The difference is clear when you consider the tremendous changes in Kenya since a new mobile payments service was launched eight years ago. The service is called M-Pesa – mobile money – and has transformed the economy.

Before the service launched, most Kenyans had no banking services. Only 2.5 million people had bank accounts in a country with a 40 million population. The majority of workers in the main cities could only send money home to their families via couriers, typically a bus or taxi driver. This was a very poor service as the money might arrive home, but on occasions would just disappear. If it did arrive, it was always subject to hefty courier fees of 25 per cent or more.

Of course, there were services such as Western Union, but these were geared towards overseas rather than domestic transfers. Then M-Pesa launched in September 2007 and has been followed by several other mobile money services. Now $2 out of every $5 transferred in the Kenyan economy is moved through mobile money – 40 per cent of the GDP – and is used and trusted by almost all Kenyan adults. The reason it took off so fast is that it was simple, easy and trusted.

The way the mobile money system works is that there are M-Pesa agents on the ground who record the sending and receiving of money using SMS text messaging. These agents are vetted by the network and act as the trusted agent to manage the money transfers. In other words, no money actually moves, just a message between one agent and another to notify the receipt and release of monies between individuals.

The result is that all Kenyans now have access to a financial system that previously excluded them. According to the Consultative Group to Assist the Poor, less than 20 per cent of the population living outside Nairobi on less than $1.25 per day used a financial service in 2008 and yet, by 2011, 72 per cent were using M-Pesa.

Equally, the system has transformed the banking system. When the service launched in 2007, banks did not trust it. In fact, they asked the regulator to get rid of it as likely to be fraudulent and conducive to criminal activity. The regulator disagreed and gave the service support, having seen its financially inclusive nature. 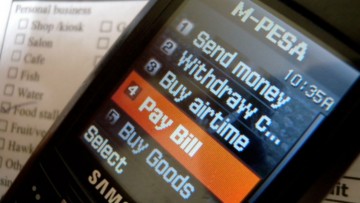 The result is that many of those people who were previously excluded from the system have now created mobile credit histories through mobile money transfers. Once you have a credit history, you can get a bank account and many Kenyans have. Since the start of the service, the number of bank account holders has increased from 2.5 million to 15 million, and continues to expand as others join the system. For example, Equity Bank recently started competing head-to-head with M-Pesa for mobile money transfers, mobile loans and more at rates that are far more competitive and compelling. The message is where there’s money to be moved, there’s money to be made.

And what does all of this mean for you and me? Well, there are thousands of unbanked and underbanked citizens across Europe and America. America, in particular, has something like 80 million people who are excluded from the banking system. When you are excluded, you are in a poverty trap that is nigh impossible to escape. Everyone can target you in scams, take the cash and leave you broke. A safe, secure and trusted money store and money movement system changes all that, as the M-Pesa example has shown.

If everyone in Britain and the world has access to financial services, then Bill Gates’ vision of no more poverty might just come true. The vision is that a basic human right should be access to banking so no one is poor because of the system. Surely, that’s a good thing therefore.