For decades, the public relations and marketing sectors have struggled to prove their return on investment. So what key performance indicators and timescales should boardrooms be using to evaluate their success?

What are the latest methods being used to evaluate the effectiveness of PR and marketing? And to what extent does “digital” provide the silver bullet when it comes to measuring returns?

Marketing has never been more accountable in the boardroom, says Richard Wergan, global head of brand, communication and digital at Philips. “In an increasingly complex marketing environment, as new kinds of media have grown in importance and mobile has created new opportunities to reach consumers, approaches to making marketing investments count have also rapidly evolved,” he says.

“As such, soft measures including reach and frequency have been put aside in favour of return on investment or ROI and attributable revenue. But although this focus on real-time results-tracking is essential to ensure that marketing spend is more agile and targeted than ever, it should not distract from taking a look at the bigger picture on a regular basis.”

Key performance indicators or KPIs are only useful, he explains, if they help marketing and PR teams understand how their activities are contributing to reaching the larger organisational goals. “Having a holistic view of how our programmes are performing across platforms and disciplines is critical to creating a successful marketing mix and reaching our consumers with the right content, in the right place at the right time,” says Mr Wergan.

KPIs must, therefore, be clearly aligned to business priorities, as well as being granular and market specific. “Philips has an award-winning and market-leading measurement system in place that aims to strike a balance between long-term and short-term KPIs, with a focus on the tangible business priorities as they change and evolve over time,” he says.

In terms of timescales, the frequency of data collection should be closely considered, he adds. “There should be enough time between the setting of the KPIs and their final measurement for the action plans to be thoroughly implemented. If the balance between actionability and frequency is not balanced, it will be very difficult to determine what exactly is having an effect on a particular KPI.

“Beyond individual campaigns, annual external benchmarks can also help to provide a longer-term view. Financial pressures can lead to an unhealthy focus on short term KPIs, but the wider picture is important for a well-rounded, accurate measurement,” says Mr Wergan.

Matt King, managing director at Media Safari, believes that if an organisation is looking to garner initial traction for its brand or key spokespeople on social media, then it could reasonably expect to see a return on the investment within two to three months. “However, a higher-level strategic objective, such as growing market share, could quite conceivably take up to nine to twelve months. As such, agreeing what success looks like is entirely contingent on the ultimate aim,” says Mr King.

A good practice approach will see marketing-PR activity measuring and reporting against KPIs on a monthly basis. “Under this model, an iterative, detailed update should also be made available at board level on a quarterly basis in order to paint a clear overview of cumulative success and the achievement of corporate goals,” he says.

KPIs, which should be agreed at the start of any campaign, can be many and varied, including such metrics as key message alignment, share of voice, prominence and positive sentiment, says David Brookes, media strategist at PHA Media.

Meanwhile, among the most useful tracking tools for evaluating the effectiveness of a campaign are Google rankings, marketing qualified leads, social shares, demo rates and cost per lead. “The obvious, most tangible measurements of success are lead generation and sales, and intelligent campaigns will ensure a clear conversion path from coverage to close,” says Mr Brookes.

Be warned, however, that the communications world is awash with metrics and competing platforms, with each vendor claiming to solve the KPI and particularly the elusive ROI question, says Richard Bagnall, chief executive at PRIME Research UK. “Most, if not all, are flawed,” he claims. “This is because they are predominantly ‘one-size-fits-all’ tools that provide an ongoing real-time ‘data puke’ of the things that are easy to count. They lack the context of being tailored to different objectives and, as a result, they fail to measure what actually matters.”

Just because there are lots of charts and dashboards, he says, doesn’t mean there is a meaningful measurement programme. “Without a clear thought process based around aligning goals, objectives and metrics, the measurement is always going to be largely meaningless – a snapshot of a moment in time and a large collection of basic outputs, none of which answer whether organisational success has been achieved or not,” he says.

While digital has been the real game-changer, Daniel Stauber, strategy director at Golin, believes it took measurement one step back and two steps forward. “Previously, the mistakes of traditional media measurement were repeated only by focusing on volumes of articles and shares – numbers that don’t provide any real insight,” he says. 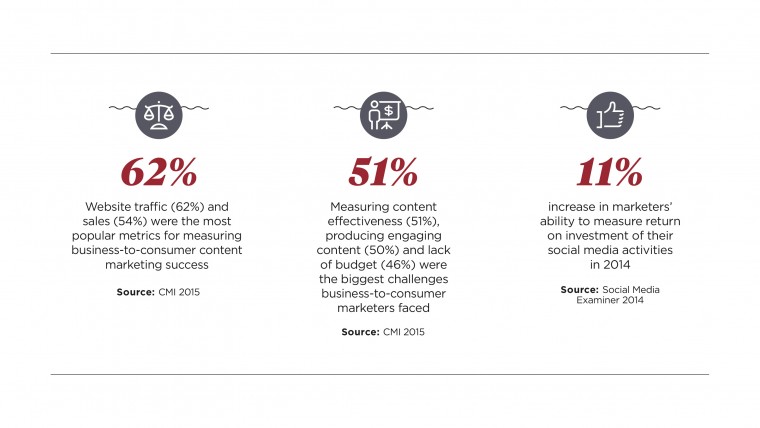 “Today, we have moved to assessing the quality and outcomes of campaigns, which means you can really see how consumers are interacting with the brand. New tools, such as digital analytics and social media listening, allow us to capture unsolicited conversations and feedback we weren’t able to capture before in a cost-effective way.”

But it’s not a silver bullet in its own right, insists Richard Rawlins, managing director at Finn public relations agency. “Digital certainly provides the basic ingredients to measure effectiveness of activity which is executed through digital channels. But most PR activity requires more than a digital action – click, share, like, purchase, comment – so it’s important to focus on the end result of activity and much of that happens in the real world,” he says.

Heather Baker, founder and chief executive of TopLine Communications, agrees. “Too many people think they can simply look back at their Google analytics and spot campaigns that were successful. That’s a ridiculous notion. Campaigns should be designed with specific outcomes in mind, KPIs must be set, benchmarked at the start and measured throughout,” she says.

Precision segmentation and control of exposure are the key pillars to driving efficient brand-building efforts through digital platforms, Andy Stevens, chief operating officer at SYZYGY Group, believes. “The growth and innovation of digital advertising over the last ten years has largely been by the tracking and understanding of people’s behaviours through anonymised and non-personally identifiable means. This allows brands to take all the work done on key audiences and their behaviours offline, and transfer this to the digital world using cookies and advertising IDs instead of ‘high indexing’ sites and networks. This cuts wastage and allows you to put a real value against each audience segment and still drive scale and reach,” says Mr Stevens.

Format is also critical. “Through rich media innovations, such as HTML 5, digital brand formats are continuing to evolve to become far more interactive, with the same being true of video as well as native content. Relatively low barriers to testing means that, with the right KPIs in place, brands can find the right mix for each campaign to drive the most bang for their buck,” he says.

“Programmatic buying is really accelerating this as the perception of it continues to shift from solely a mechanism to deliver remnant inventory into the advantageous method of combining rich data with vast inventory scale and algorithmic agility. Private auctions with publisher data overlays, large and custom ad formats, and viewability technology are all bringing efficiency to digital brand-building, without killing scale, reach or context.”

At Nestlé, the brand drives efficiency, which helps measure ROI, by doing all their programmatic advertising buys on a single platform. “Using our platform partner, TubeMogul, we can place our bids, monitor success and dial up or down impressions and spend in real time as we monitor which sites are performing best,” explains Gawain Owen, digital lead at Nestle. “With the introduction of programmatic TV and digital out-of-home advertising to the mix, this is going to become increasingly important as Nestlé works under the impression that we have to be ‘always on’.

“To monitor everything effectively across multiple platforms, spreadsheets and reports, and not miss anything, would be beyond the capacity of any company. One report means we are reducing administrative pressures and building a 360 campaign that delivers stronger results for less spend.”

But, in the end, there remains as much cynicism as optimism around digital, with some believing it is actually obstructive to proving ROI. Ian McKee, account director at Wildfire public relations, concludes: “As PR is getting more digitally advanced on a tactical level, moving into the areas of content marketing and search engine optimisation, we’re getting tied to the more easily measured metrics of those disciplines, judging success by links and clicks. This means that while at the more advanced end of marketing there’s movement away from the dreaded last-click attribution model, in PR we seem to be moving towards it.”