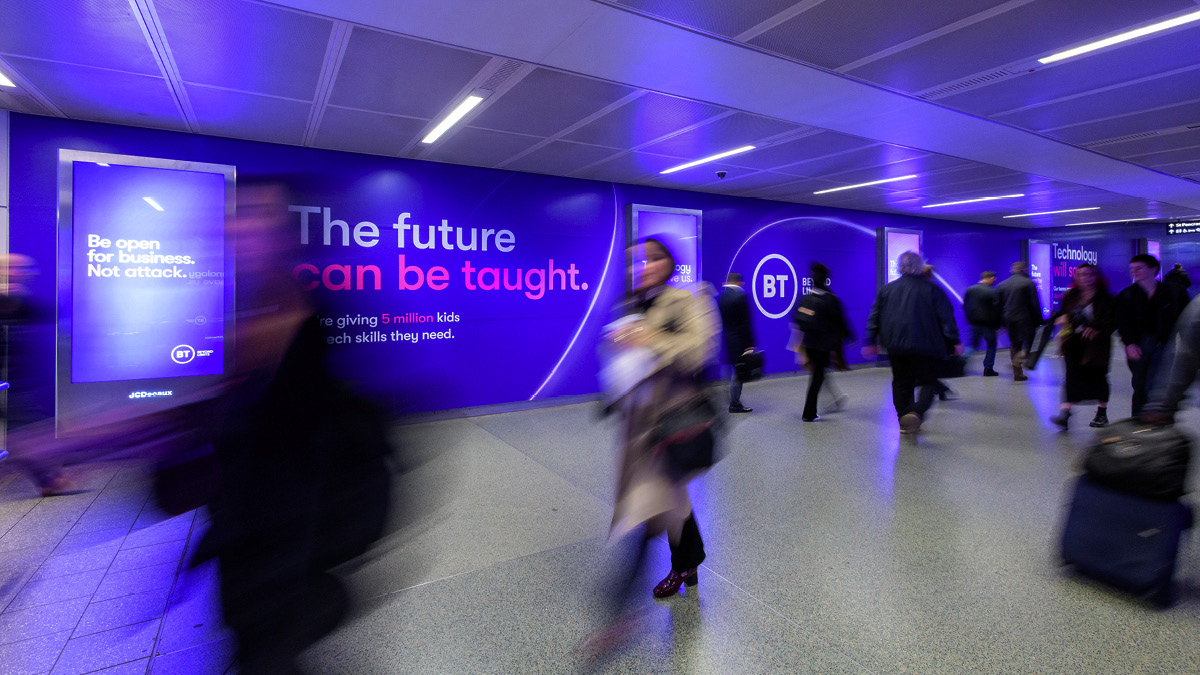 It may be one of the oldest advertising mediums, but out-of-home (OOH) advertising appears more popular than ever.

He points out that DOOH now represents 53 per cent of the overall out-of-home market thanks to the huge investment the industry has made. Yet there is still a role for traditional paper-and-paste billboards, which can help build brand fame and scale, especially in an era when younger generations are watching less television.

In his opinion, the future of the medium will be two-screen, involving both public OOH screens and more private mobile screens working in tandem.

And he adds that many clients admit they have focused too heavily in recent years on digital activation rather than long-term brand-building, pointing out the smaller-business marketplace has been leaning towards out of home because of its increased flexibility.

This is definitely the case for freelance services platform Fiverr, where Liron Smadja, director of local marketing, says it took a strategic decision to invest following the opening of its UK office last year and will probably increase DOOH in the future.

“It’s possible to do tightly targeted campaigns without spending masses,” says Newbery, who claims their posters played an important role in long-term brand-building for the tech startup.

Euan Mackay, general manager at Route, the independent measurement provider for the sector, says the medium’s power remains the same as always. “It’s a watercooler moment,” he says, putting recent resurgence of interest partly down to a reaction against short-termism following excessive investment in digital-performance marketing.

With increased flexibility in planning and buying, thanks to DOOH, Route is launching new measurement tools to improve audience estimates and better reflect the evolving marketplace.

Digital has certainly made OOH advertising more agile, according to Ellie Eyles, senior marketing manager, ski, lakes and mountains, at TUI. “Within ski, this is particularly important as there is a tight window to appeal to customers,” she says.

TUI brand, Crystal Ski, has invested in digital panels displaying real-time snow data and Eyles says the appeal is also the ability to reach busy, active people who are out and about. She says the ability to pull in live data feeds was a new development for the brand during the latest holiday season.

Mark Cripps, CMO at The Economist, is another fan of OOH advertising. He has seen the price of paid search and social go up against the brand’s target audience, making OOH more appealing. “You can be bold and impactful with posters and drive conversation, with digital now making it more relevant within the context; that’s exciting,” he says.

Online marketplace eBay has also made a significant investment in OOH advertising over the past four years. CMO Gareth Jones points out that five years ago the brand’s marketing budget was focused on digital performance campaigns. In recent times, however, OOH has helped eBay to tell a brand story and emphasise that more than 80 per cent of goods sold are new.

“It’s about taking a digital brand and making it a physical reality,” he says. “And now you can change the message on the fly, with the added advantage that brand safety is not such a concern, unlike in digital channels which have more reputational issues.”

The possibilities are endless, even for brands that use the channel in a rather old-school way. Oatly creative director Michael Lee, for instance, says the brand’s use of traditional posters has been rather like propaganda to push the brand’s own style of provocative statements. “What we do is not technical wizardry, but we’ve had quite a positive reaction,” he says.

Elena Galli, director of brand marketing at LastMinute.com Group, is another proponent of using OOH in a way that is very specific to the brand, with LastMinute.com having made a huge investment to partner with the London Eye, effectively turning the landmark into a giant, pink OOH advertisement. This lasts 365 days a year and is perfect for long-term brand-building, she says.

Meanwhile, Tanqueray Gin successfully leveraged its distinctive green colour in a campaign which launched predominantly with OOH elements and resulted in a sales uplift of 19 per cent last year. The campaign artwork features models with green blindfolds and emphasises the spirit’s unmistakeable taste. D-J Hageman, global brand director, says it led one of the highest returns on investment ever seen for one of its campaigns.

Neil Henderson, chief executive of agency St Luke’s, which worked alongside Tanqueray, emphasises the best way to use the medium involves distilling the brand’s essence. “Outdoor only works if a brand really understands what it stands for,” he says.

Ultimately, DOOH extends the job that traditional posters can do, says Nina Bibby, CMO at O2, one of the top-five spenders on OOH advertising in the UK. She says the brand gets a very good return from the advertising medium, especially when combined with TV. Working alongside challenger agency VCCP, O2 has managed to distil complex ideas simply, via its Oops and Ouch campaigns, which promoted free mobile phone screen replacements, via billboards designed to look like they had
been smashed.

“When it comes to posters, there is life in the old dog yet,” says Darren Bailes, VCCP executive creative director.

A range of companies have leveraged digital out-of-home (DOOH) advertising for a number of worthwhile causes. Tom Aggett, marketing manager at NHS Blood and Transport, worked with creative agency 23Red, for instance, to deliver a campaign via digital outdoor panels. The panels displayed live blood donation appointment times and locations, as well as how many people were donating at any given moment, leading to a 55 per cent increase in registrations. Energy supplier Eon used interactive screens in recent months to highlight air pollution levels. Scott Somerville, head of advertising, public relations and campaigns, explains that the brand chose to stop people in the street with dynamic displays with embedded facial detection technology, which reflected people’s images back at them, alongside real-time pollution readings. And, at the Co-op, chief customer officer Ali Jones says she worked with Posterscope and agency Dentsu Aegis to promote Gro, a new plant-based range of foods. Digital panels directed people to their closest stores, while an integrated promotion ran on Twitter in university towns, offering student discounts. Central to the Co-op’s brand is its investment in local communities and the ability to target in an increasingly granular way makes the channel compelling as it can speak to local communities about causes close to home.