McLaren Racing’s CMO, Claire Cronin, explains how the team is becoming more accessible to consumers than ever, as Formula One’s global charm offensive goes into overdrive

If you know your Ascari from your Andretti and your Zandvoort from your Zeltweg, you’re probably an avid Formula One fan, but you don’t have to be an aficionado to enjoy its twists and turns. Arguably, F1 reaches a wider audience than that of any other sport through the extensive global coverage of grand prix weekends, popular TV shows such as Netflix’s Drive to Survive and a whole host of social media campaigns and marketing partnerships.

The controversial Abu Dhabi Grand Prix in December 2021, in which Max Verstappen pipped Sir Lewis Hamilton to the driver’s world championship on the final lap of the season, “pulled in a bigger global audience than the Super Bowl managed – and there were 22 grands prix last year”, notes Claire Cronin, CMO at McLaren Racing.

Founded in 1963 by New Zealand driver Bruce McLaren, the team is one of the most successful and widely recognised names in motor sport, having won 183 grands prix and eight constructors’ championships since making its F1 debut in 1966. It also runs two other racing teams – in the IndyCar and Extreme E series – and McLaren Shadow, its esports équipe of virtual drivers.

“There are 17 races this year in IndyCar, five in Extreme E and another half-dozen in esports. We’re on TV a huge amount,” Cronin says. “The cars are effectively mobile billboards, both for McLaren and for all the brands that choose to partner with us.”

But how a brand such as McLaren reaches its audience is about so much more than a 200mph logo. When it comes to communications, it’s all about platforms, content and partnerships.

“You’ll never see a McLaren Racing advert on television, but you will see our partners, particularly in the technology space, featuring us in their TV advertising to help tell their story,” Cronin says.

She cites the example of Cisco Webex, which entered a partnership with McLaren to provide its communications tech, initially at trackside and then at the team’s base near Woking in Surrey as hybrid working became the norm. Cisco Webex made a film about McLaren’s set-up and used it as the basis of a TV commercial that was broadcast internationally, showcasing the work of both companies.

“Increasingly, our brand partners are saying: ‘If we want to stand out in our category and bring our products’ unique selling points to life, featuring McLaren in our advertising is a really smart way to do it.’ We know our strategy of partnering with brands early in consumer lifecycles is making a difference,” Cronin says. “We’re turning 60 next year and we’re very focused on how we can bring more fans into our world. A survey last year found that McLaren was the overall fan favourite, among not only avid followers of the sport but also women and generation Z.”

She points to the range of brand activations that McLaren has used to reach as wide an audience as possible. “If we want to get more women, children and people from diverse backgrounds interested in the sport and to come and work for us so that we win the fan engagement battle and the war for talent, we need to use many touchpoints to reach them. For instance, we did a big launch event for our new car, like everyone does, but we were the only team that unveiled ours as a Lego Technic model too.”

And then there’s its ambition to extend its reach into other forms of motor sport. McLaren is the only F1 team so far to have entered the world of Extreme E off-road racing for electric SUVs, she says, adding: “We see that the future is new platforms – and bringing fans of all ages into all those different platforms.”

Brand extensions and particularly merchandise, such as the line of apparel made in partnership with Castore, a premium sportswear brand, are central to Cronin’s strategy. Merchandise not only gives fans a chance to ‘own’ the brand beyond race day; it also plays its own part in subtly increasing brand awareness. 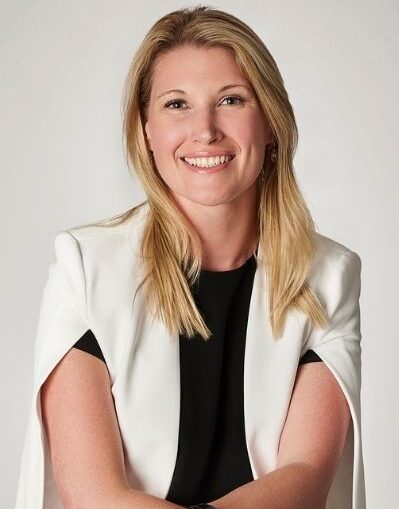 “Particularly in our 60th birthday year, you’ll see lots of new products coming to market that are an authentic extension of who we are,” she says.

Cronin notes that products featuring McLaren’s papaya orange racing livery and its distinctive “speedmark” logo are top sellers on its ecommerce site. But she stresses that the team will not be painting the world papaya at any cost, adding: “You won’t see an explosion of tat at airports, where you can pick up cheap key fobs, whistles and plastic pens that aren’t sustainable.”

Although McLaren is clearly aiming at the premium end of the market with its merchandising strategy, as befits the high-octane glitz of F1, Cronin feels that the far more inclusive nature of the team’s communications has made it a favourite among fans. There is content for everyone, from the “avid fan who soaks up all the details” to the “trends fan” who came to the sport through TV coverage or the Drive to Survive docuseries, she says.

YouTube videos, behind-the-scenes footage, fan events and competitions all bring what could otherwise be seen as an exclusive and elitist sport closer to the consumer, whoever they might be.

Even when the content being served up is overtly commercial in nature – for instance, the social media skit in which driver Lando Norris and his then teammate, Carlos Sainz, delivered Amazon packages and bottles of Coca-Cola round Austin, Texas, just before the US Grand Prix there in 2019 – fans of all types still love it. The video, entitled Driven to Deliver, was the most watched piece of content that Amazon produced that year.

She acknowledges that, when it comes to such content, McLaren isn’t just competing with Mercedes or Red Bull for fans and sponsors; it’s competing with other sports.

“If we want to attract brands to work with us, we must do the most innovative things that amplify their messages and speak to the fans because, ultimately, that’s who they’re trying to reach. We view everything we do through the lens of how that will excite the fans.”

Despite the global audience that F1 commands, Cronin is still working hard to bring more people over to the fast side. One such initiative was a bid to convert a pair of dyed-in-the-wool American football supporters during the week of the US Grand Prix in November 2021. McLaren Fan Heist, the 25-minute YouTube video of the action-packed event, featuring Norris and his current teammate Daniel Ricciardo, has attracted nearly 1.2 million views.

Another video, with nearly double the number of views, was produced in partnership with global hotels group Hilton, which had run a competition for members of its loyalty programme. In it, Norris chauffeured the winner’s son to school in a McLaren 720 supercar. The creative concept was originally a fan’s idea.

“We want to do something that no other team would do – and we want to bring fans right into our environment,” Cronin says. “You’re not a logo on the car. You’re in the team.”