What is a crossroads in the world of aviation – an air near miss? Hopefully not, but how ever it’s described, business air travel is at a critical juncture.

Falling fuel prices have given it a boost, with the strength of the UK and US economies providing additional stimulus. Recent findings from the Business Travel magazine reveal that a third of business travel buyers have more to spend. London City Airport, where business travellers account for more than half of all traffic, saw numbers increase by nearly a fifth to 4.3million between 2014 and 2015.

On the other hand, the slowdown in China, the eurozone’s continued stagnation and fears about a rise in US interest rates are still causes for concern, and have prompted many companies to keep a closer eye on their business travel budgets and look for better deals.  Research by Collinson Group, which owns business lounge access service Priority Pass, has found, for example, that three-quarters of frequent business travellers are choosing to fly economy.

However, the case for business travel, including air travel, remains strong. According to a report by the US Travel Association, for every dollar invested in business travel, businesses benefit from an average of $9.50 in increased revenue and $2.90 in new profits. The most recent Travel Leaders Group research found that millennials are nearly twice as likely to want to travel more for business than baby-boomers (45 per cent compared with 26 per cent). 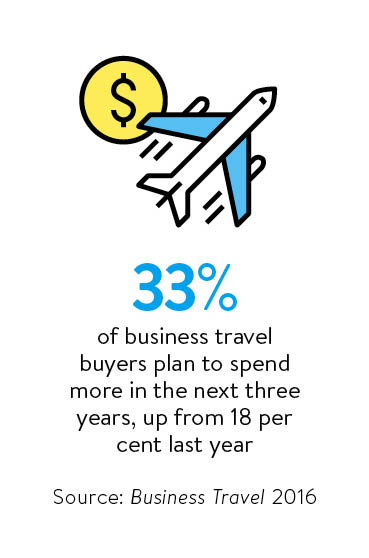 Over half (57 per cent) of millennials believe that technology can never replace face-to-face meetings to get business done. The idea that, although technology has made the options for communication with colleagues in other cities, countries or even continents easier than ever, face-to-face meetings still have great value, is supported by experts such as Cary Cooper, professor of organisational psychology and health at Manchester Business School.

“Meeting face to face is especially important when you don’t yet know the people you’re going to be working with,” he says. “This critical first meeting needs to be eyeball to eyeball so that you get the personal interaction. Technology doesn’t easily allow for that all important small talk, asking about family and hobbies, for instance.”

It’s also easier to overcome cultural differences when you sit down in someone’s office and see where they live and work. “This is particularly important when you’re dealing with different cultures, such as Japan and other far-eastern countries. Once you’ve established that initial contact and developed the personal chemistry, then it’s a lot easier to use Skype and e-mail,” says Professor Cooper.

Business travellers can now access private aviation quickly and more cheaply than ever before and, at the other end of the price scale, they’re being courted by budget airlines with special prices, packages and services.

Business travellers have revealed a strong desire for experiences to enhance their travel experience, such as access to airport lounges, concierge services and upgrades

Another factor that business travellers and senior managers are increasingly taking into account is the amount of work that executives can do while they travel. According to the US Travel Association survey, business travellers will intentionally arrive early at the airport so they can enjoy business lounge facilities, with 42 per cent reporting they see it as an opportunity to get some work done and 81 per cent keen to take advantage of free wi-fi.

Providers are raising their game. As well as improved connectivity, London City Airport, Heathrow Airport and Gatwick Airport are now offering a free shoe shine and a paid-for service called AirPortr, which allows passengers to leave their luggage at the airport, go to their meetings and have it waiting for them in their hotel at the end of the day. On departure, they can have their luggage collected from their hotel or office, visit clients and others, and pick it up at the airport before their flight.

Airlines too are realising that adding value generally is increasingly important. “While price is always one factor, we’re seeing that business travellers are increasingly searching for the best-quality seat and wider customer experience,” says Jon Harding, senior vice president, north, south and west Europe, at Qatar Airways. “I think seat quality will continue to be a major differentiator.” Qatar’s new business class seat, flying from December, is intended to feel like a first class seat.

“Business travellers have revealed a strong desire for experiences to enhance their travel experience, such as access to airport lounges, concierge services and upgrades,” says Errol McGlothan, general manager at Priority Pass. “They are also keen to extend the benefits from their business trips to improve the experience of travel with their families, for example using points to ensure they can book plane seats together for their families when on holiday.”

The industry does, though, continue to face long-standing criticisms. Delayed flights are still a bugbear for 87 per cent of business travellers, according to the most recent Travel Leaders Group survey, as are fees for changing flights (73 per cent) and seat (62 per cent).

Greater competition and evermore demanding passengers mean business air travel is facing increased challenges. But this is one industry with innovation and agility at its core – and that means business air travellers have more options than ever before. 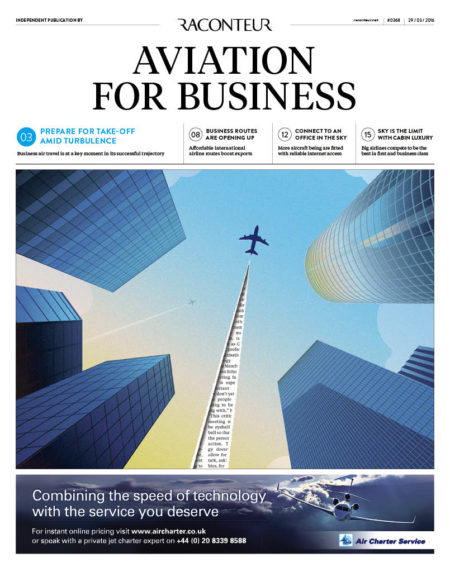