Sporting a designer label was once the height of cool: a visual prompt to an aspirational consumer lifestyle that also provided brands with the bonus of free promotion. However, the established quid pro quo is now shifting into reverse as a growing number of products opt to display the name and often image of the consumer on packaging.

It’s a trend that’s been made viable through the use of digital print technology in place of the longer-established conventional offset litho and flexo processes, unlike which it isn’t dependent upon the preparation of a separate plate for each print run.

Not only can a digital press, many of which are developed by well-known electronics names such as HP, Konica Minolta and Xerox, switch between an infinite number of different impressions without interruption, it will also print precisely the volume of each required. Rapid set-up, minimal waste, reduced inventory, print on demand that’s always topical – what’s not to like?

Within our social media dominated culture, those attributes have transformed what was a no-go area in maintaining brand integrity into fair game for any Tom, Dick or Harriet; also one that can be played by any brand owner irrespective of size. While the likes of Coke, Nutella and Oreos have attracted most of the attention for their recent personalised retail marketing campaigns, niche and startup brands are equally capable of getting upfront and personal without blowing the budget.

Customisation on a budget

For the natural juice brand Firefly, inviting its consumer-base to upload selfies for reproduction on the bottle’s label (#feelingfly) is an extension of an existing tradition, says marketing manager Sarah Brooks. “Innovation is key for driving the soft drinks category forward and consumer engagement is crucial,” she says. “Having received so many images from loyal fans over the years, the next step of brand development was to follow their lead.” 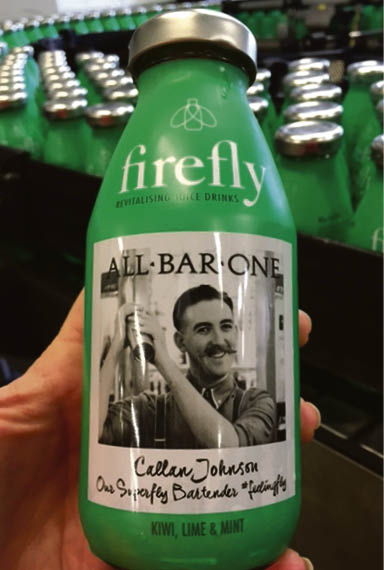 Personalised bottles of Firefly available in six different flavours are digitally printed by Berkshire Labels and shipped within two days of being ordered. Meanwhile, there’s been an unanticipated bonus. The quirky image of an All Bar One bartender on one such label has led to the brand now being stocked throughout the chain’s 50 UK outlets, helping to boost annual production to 1.7 million units. Berkshire Labels also regularly print short-run, full-colour personalised sleeves for the brand’s promotional on and off-trade events.

In addition to printing customised packaging on its state-of-the-art HP digital presses, Grimsby-based Ultimate Digital has developed a cloud-based integrated workflow that ensures each personalised pack goes to the correct recipient, says executive director Chris Tonge. “Smartflow interacts equally with both the consumer and the brand owner. It collects data, builds artwork and manages the entire web-to-print process from when the consumer uploads text and images online through to the pack being despatched 48 hours later,” he says.

It’s an invaluable tool that will prove its worth ahead of Christmas as confectionery brand Kinnerton fulfils the delivery of thousands of individually personalised advent calendars. Drawn from a selection of seven differently themed designs featuring topical children’s favourite characters, including the Trolls and PAW Patrol, it’s a first-to-market venture that’s tipped to set an ongoing seasonal trend.

Ultimate Digital is well versed in how to convey personal best wishes for the festive season. The printer was instrumental in delivering last year’s Waitrose #MakesChristmas campaign led via social media, as well as personalising the cool-bags handed out in-store for customers who’d ordered the retailer’s turkey breast – a UK first, according to Waitrose seasonal and specialised poultry buyer Frances Westerman.

Also using digital to make chocolates a more personal proposition is startup brand Print My Smile, which as of next month will be giving visitors to its website a free hand in designing their own presentation box. “‘It’s all about enabling the consumer to be in control,” says co-founder Suzanne Rouart. “While the big confectionery brands may be doing beautiful things with personalisation, we provide the flexibility to create a unique pack that’s exclusive to the recipient.”

The full production and dispatch of individually designed boxes is completed within three days of order by the Alexir Partnership, one of the earliest UK carton suppliers to install a digital press.

Packaging is media – it’s a billboard. It’s just a matter of rethinking what it can do when you can change it daily and where content can be infinite

“We foresee massive growth in digital carton production in the next five years as brand owners, retailers and design agencies become more aware of the breadth of potential for customisation, not least in dovetailing the technology’s short-run and personalisation capabilities for test marketing or to pre-launch new products to a targeted demographic of trade buyers,” says Alexir marketing manager Claire Summersby. 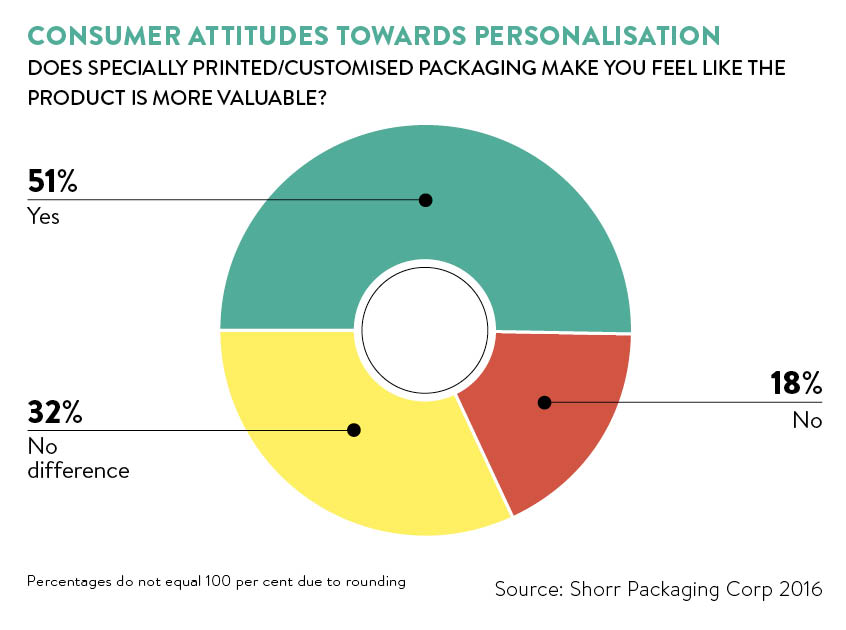 There’s far more to personalisation than the equivalent of a selfie, says Silas Amos of Design Thought, who masterminded last year’s Irn-Bru Fabric of Scotland campaign, which substituted the beverage’s blue and orange brand colours with those selected at random from a range of 57 different clan tartans and as a result lifted sales by 17 per cent between Hogmanay and Burns Night on January 25.

“The novelty of sticking people’s names on packs has been done; we’ll get bored with that pretty soon. It’ll be how and why brands personalise that will start making a difference,” says Mr Amos. “Think of audiences not as demographics, but as individuals. Think about localisation. Think about real-time topicality. Think about the charisma that is within a brand anyway. Then think how the brown box that delivers goods we order online can be brought alive at the door.

“Packaging is media – it’s a billboard. It’s just a matter of rethinking what it can do when you can change it daily and where content can be infinite.”

Corrugated box manufacturers are rapidly becoming alert to the potential of customisation. After four years in development with HP, sector leader DS Smith has invested more than £2 million in the UK’s first corrugator-width digital press with a running speed of 180 metres per minute.

“While personalisation has become commonplace for primary applications, it’s still a pretty new phenomenon in the secondary packaging industry. However, we’re constantly exploring opportunities that digital technology can present us and I expect customisation to really come to the fore in the next 12 months,” says sales and marketing director Mick Thornton.

Meanwhile, with six other suppliers having brought new presses on to the market this year, the standard issue cardboard box with black lettering is clearly ripe for recycling.