Sorin’s Perceval valve, which has a self-anchoring frame so surgeons can replace diseased aortic valves without sutures, is proving a major technological advance and is moving rapidly towards being the standard of care.

The device, which has been used successfully in more than 12,000 patients in 48 countries, reduces operation time, the risk of complications and has been shown to improve patient outcomes.

Its ingenious design enables rapid deployment and offers a significant boost to the 1.68 million people in Europe who suffer from aortic stenosis, a condition where a heart valve leaflet becomes calcified and suffers reduced flexibility and efficiency.

Sorin’s Perceval valve reduces operation time, the risk of complications and has been shown to improve patient outcomes

Aortic stenosis, which forces the heart to exert greater force to circulate blood, is the most common heart valve disease and has a mortality rate of 30 to 50 per cent in severe cases within a year of diagnosis.

Replacing the damaged valve traditionally requires 15 to 18 permanent sutures, but the Perceval comprises a bovine pericardium inserted in a super elastic that adapts to the anatomy of the aorta and to follow its movements, relieving the stress on the leaflets at each cardiac cycle and targeting an enhanced durability. 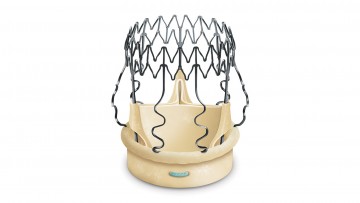 Its flexibility and simplicity of use means that operation trauma is reduced and more than 100 clinical papers have demonstrated benefit across factors such as surgical duration, the length of post-operative hospital stays, blood-flow dynamics, transfusions and healthcare costs.

It can be precision-placed with a reproducible surgical technique in both minimally invasive cardiac surgery (MICS) and conventional surgery. It can also more than halve the critical cross-clamp time taken in traditional aortic valve replacement procedures to 30 minutes.

The advantage of Perceval was characterised in a report by Dr Kevin Phan’s Collaborative Research Group, published in the Annals of Cardiothoracic Surgery in April 2014, which said: “Sutureless aortic valve replacement (SU-AVR) has emerged as an innovative alternative for treatment of aortic stenosis. By avoiding the placement of sutures, this approach aims to reduce cross-clamp and cardiopulmonary bypass (CPB) duration, and thereby improve surgical outcomes and facilitate a minimally invasive approach suitable for higher-risk patients.”

Its success was underscored by results from a five-year follow-up from three prospective clinical trials, which followed more than 700 patients across 25 European centres between 2007 and 2012 to evaluate feasibility and valve safety. Its report, published by Malak Shrestha in the European Journal of Cardio-Thoracic Surgery earlier this year, said: “This European multi-centre experience, with the largest cohort of patients with sutureless valves to date, shows excellent clinical and haemodynamic results that remain stable even up to the five-year follow-up.

“Even in this elderly patient cohort with 40 per cent octogenarians, both early and late-mortality rates were very low. There were no valve migrations, structural valve degeneration or valve thrombosis in the follow-up. The sutureless technique is a promising alternative to biological aortic valve replacement.

“In summary, this study reports the widest and longest experience with a sutureless valve and highlights its safety and efficacy even in an elderly population. The Perceval valve implantation could be easily performed by offering a significant reduction of cross-clamping and CPB times compared with both the traditional valve prostheses and the other sutureless prostheses available on the market even when performed via a minimally invasive approach.

“Therefore, in patients needing aortic valve replacement with or without concomitant procedures, this device could have an advantage compared with conventional sutured valves. The continuation of the patient follow-up will provide further assessment of long-term valve performance.”

Professor Vinnie Bapat, a consultant cardiac surgeon at London’s Guy’s and St Thomas’ Hospital, highlights that future reinterventions with transcatheter aortic valve implantation (TAVI) valves are safe and feasible with the Perceval, thanks to its unique design.

Sorin, which has a track record for innovation in cardiac surgery and cardiac rhythm management, and has more than one million patients treated with its devices every year, developed Perceval after an intensive research and development programme into improving outcomes for aortic valve replacement patients.

The Perceval has innovation at its core to give it a unique mode of action and tests showed its durability as it recorded no failures after two billion cycles, the equivalent to 50 years of natural heart life.

Thanks to its ease of implant and encouraging results, the Perceval has the potential to become the valve of choice to treat patients eligible for aortic valve replacement with biological valves.