The agribusiness sector is booming as global players, particularly in China, move to secure a bigger slice of food production

If proof were needed that the agribusiness sector is thriving, then this should do it – of the top ten biggest ever mergers and acquisitions (M&As) in the sector, five have come since the start of 2014, according to data compiled for Raconteur by Dealogic. And if Monsanto’s proposed $47-billion (£30-billion) takeover of fellow seeds and pesticides firm Syngenta goes through, it will be by far the biggest agribusiness deal to date.

Why is it happening? Partly because of the general M&A fever, but also because businesses are desperate to profit from emerging market growth. Of the top ten deals either done or pending in 2015, five of the acquirers are Chinese, while one comes from Indonesia and another from Nigeria. Of the targets, five are Chinese, one Malaysian and one Brazilian.

Here are five of the most important recent agribusiness M&As:

Olam’s $1.3-billion purchase of Archer Daniels Midland Company’s cocoa business was not only one of the biggest deals of the past couple of years, but means the Singaporean group is now among the top three players in the cocoa world, along with Barry Callebaut of Switzerland and American giant Cargill.

The deal means that Olam has facilities in the UK, Netherlands, Canada, Ghana and Côte d’Ivoire. The purchase was based on Olam’s conviction that as incomes rise demand for

The conviction is shared by American agribusiness group Cargill, which recently picked up ADM’s chocolate business for $440 million (£281 million). 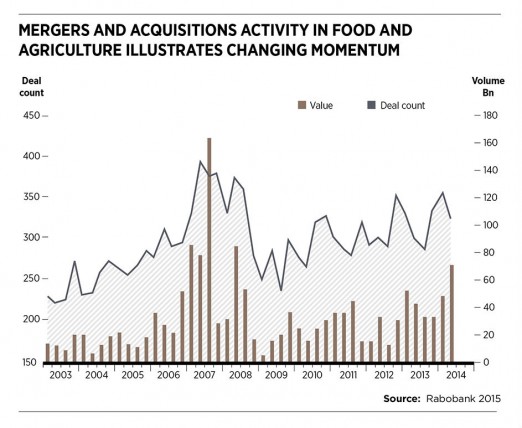 Increasing demand for grain in China lies behind two huge deals by state-backed COFCO (Cereals, Oils and Foodstuffs Corporation). In 2014 it paid about $1.5 billion (£0.96 billion) for 51 per cent of Dutch trader Nidera, which has access to North and South American grain and oilseed.

“COFCO will set up a stable grain corridor between the largest global grain-growing origins and the biggest global emerging market, in terms of grain consumption growth in Asia,” says COFCO chairman Frank Ning.

Another way of putting it is that the deals give China the ability to feed itself without using the four big Western agribusiness companies, ADM, Bunge, Cargill and Louis Dreyfus Group, together known as the ABCDs.

Giant family-controlled Brazilian meat company JBS recently paid $1.5 billion for Northern Irish poultry firm Moys Park. With 8,000 workers, it is Ireland’s biggest private-sector employer and makes some of the Jamie Oliver-branded chicken products. The deal gives JBS access to markets in the UK, other wealthy European countries and Scandinavia. As the European market recovers, emerging market businesses are likely to be keen to get involved to diversify their own country risks.

JBS has been on the acquisition trail ever since the financial crisis hit in 2007 and other deals have included the $1.3-billion (£0.83-billion) purchase in late-2014 of Primo Group, an Australia and New Zealand-based pork producer which exports much of its produce to China.

Milk is another area where M&A is hotting up. In 2014 France’s Danone paid €486 million to increase its stake in China’s biggest milk producer, China Mengniu Dairy, to 9.9 per cent.

As part of the deal Danone formed a joint venture with Danish dairy co-operative Arla, which owns 5.3 per cent of the Chinese firm, and COFCO, which owns 16.3 per cent. So they jointly control about a third of the company.

Milk is also a big pull in Africa and in June Dutch dairy co-operative Friesland Campina paid €113 million (£79 million) to increase its stake in its Nigerian subsidiary FrieslandCampina WAMCO to 69 per cent.

Despite owning regionally well-known brands such as Wonder White bread and Meadow Fresh milk, Australia’s Goodman Fielder has been struggling in recent years, and made a AUS$65 million (£31 million) loss in the first half of 2014.

The theory is that as Asians become wealthier, they will want more “Western” foods, such as bread and dairy products. Some Asian countries, such as Indonesia, have little agricultural land and so Australian brands are well placed to meet demand. Wilmar, Asia’s largest agribusiness group, is well aware of the appeal of Australia and already processes half of the country’s sugar crop.