As m-commerce continues to increase, loyalty programmes should be available on smartphones, tablets and wristwear to meet the expectations of customers on the move

For more than a decade, retailers have looked to strengthen relationships with their customers through loyalty programmes. But these schemes tend to reward long-term customers and, because they are based on collecting points, work best for planned purchases, such as a flight.

Despite their success, conventional loyalty schemes find themselves increasingly at odds with today’s smartphone-centric customers and a world of “in the moment” purchases. According to the IMRG Capgemini e-Retail Sales Index, UK m-commerce sales – purchases on tablets and smartphones – grew by 57 per cent between June 2014 and June 2015.

This is forcing retailers to move to mobile-based loyalty schemes, both to capture those new customers and to preserve the investments in their costly loyalty databases.

Moving loyalty schemes to smartphones is the obvious next step, as it means customers have access to the brand or retailer’s latest deals and their scheme membership wherever they are

Keeping up with competitors

Failure to keep up with the trend for mobile shopping, as well as consumers’ use of social media and mobile sites to plan and research purchases, risks driving customers to the competition. 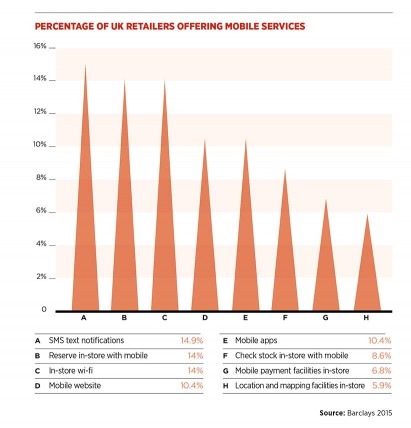 And consumers are not just using mobile devices when they are out and about. Research by the MEF, an industry group, found 14 per cent of smartphone users shopped on their device while watching TV.

Moving loyalty schemes to smartphones and wristbands is the obvious next step, as it means customers have access to the brand or retailer’s latest deals and their scheme membership wherever they are.

“A mobile app allows you to personalise [the experience] and to target the consumer in real time, rather than sending out paper coupons a few weeks later,” says Ben Perkins, head of consumer business research at consulting firm Deloitte.

Nor is it only consumer retail that is moving to smartphones as business-to-business (B2B) transactions, especially those for small and medium-sized enterprises, are following suit.

According to Alan Kavanagh, a plasterer working in south-west London and Surrey, having his suppliers’ loyalty and trade discount cards on his smartphone lets him check the best deals on a job, without having to hunt around for physical loyalty cards or print off vouchers and coupons.

Retailers, though, are still trying to discover the best way to put loyalty programmes into customers’ hands. Mobile-based loyalty schemes range from the very simple to the complex, fully featured app.

Tesco’s early Clubcard app, for devices such as the BlackBerry, simply copied the company’s existing loyalty card barcode on to the phone’s screen; now the app lets members track their points too.

Dublin Airport, which served 21.7 million travellers in 2014, has developed an app that integrates a host of the airport’s back-end systems, including gate and departure, and even weather, information. The app gives passengers free access to the airport’s wi-fi, without the need to log in, and personalised maps showing travellers the best way to the gate.

For the airport, though, moving to a mobile app was a logical next step, especially for frequent fliers. “Car parking, fast track security passes and lounge access are available on the Dublin Airport website and Dublin Airport apps, and there has been a noticeable shift to m-commerce,” says John Sisson, commercial product development manager at airport operator DAA. “Customers can set up an account with their details on their first visit. They don’t have to re-enter their details and are then entitled to offers and promotions.”

Even though an airport’s customers are, to a degree, “captive”, Dublin’s experience mirrors those of both consumer and B2B retailers. The app itself is mostly about convenience, but it provides commercial revenue through added-value services, such as lounge access, and a way for the airport to stay in touch with its customers.

“Often mobile apps provide a functional experience which has little to do with rewards, but makes something easier, such as flight check-in,” says Alex Smith-Bingham, UK head of digital, consumer products and retail, at Capgemini, a technology consulting firm. “But you can use it to encourage consumers to do more with you.”

Although the potential to marry brand apps and loyalty programmes is huge, there are both practical and technical hurdles to overcome.

“I’d say that for now the impact of mobile apps on loyalty schemes is relatively limited,” says Thomas Husson, a vice president at research firm Forrester. “We’re only scratching the surface of what’s going to come next. Branded app users are more likely to be loyal customers, but few consumers use branded apps on a regular basis.”

One challenge is understanding the need to target offers and features in an appropriate way. A traveller might be interested in a promotional link for a hotel when searching for a flight, but that same ad would be annoying if they are using the app to check in.

“Mobile is exciting because of its impulse nature and you have much more control than you have with a mailer,” says Capgemini’s Mr Bingham-Smith. “But then, everyone has a letterbox.”

And, despite the statistics showing a rapid growth in mobile commerce, by no means everyone has a smartphone or wants to use a retailer or brand’s app.

Travel apps are popular because services such as check-in and electronic boarding passes offer an immediate benefit to the passenger. To encourage app usage, retailers need to think beyond simple promotions, and look at integrating technologies, including mobile payments and location awareness, so the app knows if you are at home, at work or travelling.

“The massive increase in mobile payments offers a real point of differentiation for mobile loyalty,” says Deloitte’s Mr Perkins. “You can make a promotion instant and context relevant, and not just based on previous purchasing behaviour.”