With the recent cinematic successes of Churchill, Dunkirk and Darkest Hour, the year 1940 appears to be very much in vogue.

The legal profession may be following the trend, it seems, with a recent Thomson Reuters report comparing law firms’ attitudes to change with that of the creators of the Maginot Line, France’s supposedly impregnable Second World War defence structure that proved rapidly obsolete when faced with the German Wehrmacht’s Blitzkrieg and paratroopers. 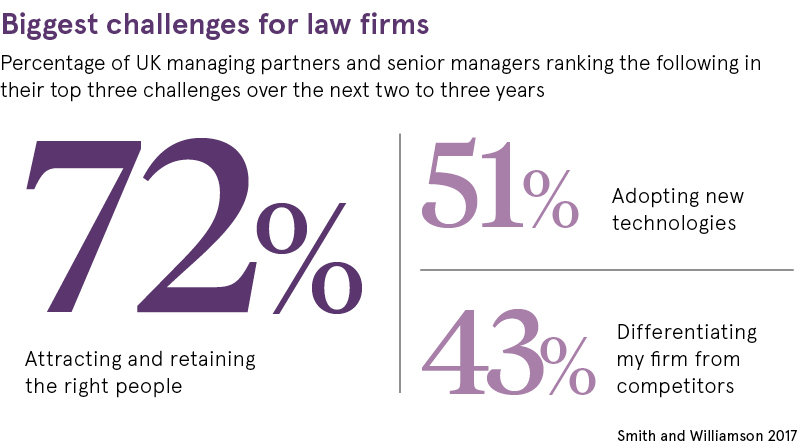 Entitled the 2018 Report on the State of the Legal Market the publication, produced in conjunction with Georgetown University in the United States, warns: “Flat demand for law firm services, declining profit margins, weakening collections, falling productivity, and loss of market share to alternative legal service providers and others are gradually undermining the foundations of firm profitability.”

In the face of such challenges many mid-tier outfits are finding themselves in a particularly exposed position, says law firm strategy consultant Richard Tromans.

“The well-known economic argument of get big, get niche or get out is partially true, but it’s more complicated than that. This isn’t necessarily about the size of a firm’s revenue,” he says. “The organisations that are likely to be most under pressure are those that are handling day-to-day legal tasks, such as employment, real estate, IP and trademark, for medium-sized and upwards corporates.”

Mr Tromans points to a legal market in a state of flux, where new entrants, such as the big four accountants, are offering many such day-to-day services, which were once the preserve of medium-to-large law firms, at extremely competitive prices.

Last month, for example, PwC launched a flat-fee employment law service that gives clients unlimited access to a technology portal providing, among other things, template contracts, policies and letters, in addition to a legal advice hotline. Costs for the service start at £250 a month for companies with fewer than 100 employees.

Increased competition is only part of the story, says Tony Williams, principal of legal consultancy Jomati. “A lot of clients understand they have considerable buying power and one of the challenges facing the mid-tier is the panel-type process [of choosing advisers],” he says. “This is squeezing firms out of the higher-end corporate work from the FTSE 100 organisations and their subsidiaries. While those companies weren’t necessarily ever a big area for them, they could be relevant in certain offices and certain locations.”

While Mr Williams acknowledges mid-tier niche firms might emerge successful from a panel process, he suggests less-focused firms are being increasingly sidelined. He says: “Every time you see a panel announcement, and the firms that get on that panel, it’s not the mid-tier firms.”

He believes such firms need to take a long, hard look at their role, their offering and what they can deliver to potential clients. “If they provide a good service, have a good client base and offer a good understanding of a client’s business then they have some great opportunities. But you don’t get that by accident. You have to work hard at it and demonstrate it,” says Mr Williams.

Firms’ approach to technology is likely to be key to this process, adds Mr Tromans. “Tech is going to become a differentiator. If a firm gets its strategy right in this area then it will gain a competitive advantage,” he says.

Technology can create new value in the legal services market

“It’s not just about clients pushing down on fees and firms introducing automation to deal with that. Technology can also create new value in the legal services market. The biggest risk to the mid-tier is underestimating the importance of competitive issues such as these.”

One firm that is forging ahead on the technological innovation front is Mishcon de Reya, which in 2017 launched an incubator programme, MDR LAB, designed both to create partnerships with legal tech companies and raise awareness of their potential among the firm’s staff. This programme contributed to its winning the award for the Best Use of Technology at last year’s British Legal Awards.

Mishcon recently invested in two of the six firms that were part of MDR LAB, Everchron, a litigation management software outfit, and Ping, whose product automates timekeeping for lawyers.

Nick West, Mishcon’s chief technology officer, says: “We’re not a venture capital firm; we’re not investing money for the sake of it, but by investing we not only stand the chance of financial upside, but we get to be more influential about how the companies develop over the next year or two.”

A similar approach can be seen at Cambridge-based Taylor Vinters, which in recent years has partnered with artificial intelligence-focused startups Pekama and ThoughtRiver. At the same time, it has sold off other elements of its business, such as regional real estate, that were deemed a distraction from core aims.

The firm’s managing partner, Ed Turner, explains: “Assuming it’s an accepted proposition that fundamental change is going to be necessary, it’s important to understand the purpose of your organisation and why there’s a need for it in the future. Having a clear understanding of that is absolutely essential, particularly in the mid-market.”

For Taylor Vinters, the focus is now on entrepreneurship and innovation, with tech partnering an important part of the firm’s offering.

Mr Turner says: “It’s brought some intangible benefits, such as cultural change and the excitement that goes with that, but it has also been a good door-opener with clients. If we’re talking to fast-growing tech businesses, it gives us huge kudos that we’re an investor ourselves.”

It has also helped Taylor Vinters look further afield for work. He adds: “If we’re talking to a general counsel in a large US corporate in the innovation business, it’s likely they won’t have heard of us because we’re not very big. But we benefit from being able to discuss innovation based on our understanding of working with organisations like theirs. That helps us have conversations with clients who otherwise wouldn’t have given us so much time and opportunity.”