I hate to do this to you in March, but remember the horrors of Christmas shopping? The congested malls? Packed escalators, side by side, carrying hordes of people from floor to floor? Picturing that? Bingo – you have captured what’s happening when several packets of data are trying to reach your iPad at peak time. To add to the fun now have your shoppers jostle through a tiny tunnel at the end of their journey. Bounce them around and hurl them through the air at 500mph.

So can you imagine the added complexity of getting these packets of data to a tiny moving target bouncing around at mach 0.65? The science of turning your aircraft cabin into an extension of your office is nothing short of a modern miracle.

Unsurprisingly what is happening in the air reflects what’s happening on the ground and service providers report that the most common internet usage is for e-mail, web browsing, news and social media, in particular Facebook, Twitter and LinkedIn.

Rockwell Collins offers a range of integrated hardware and service solutions to get internet on to an aircraft. James Hardie, Europe, Middle East and Africa director for information management services, explains: “It really becomes just like any other office on the corporate network, or home office or even hotel wi-fi. 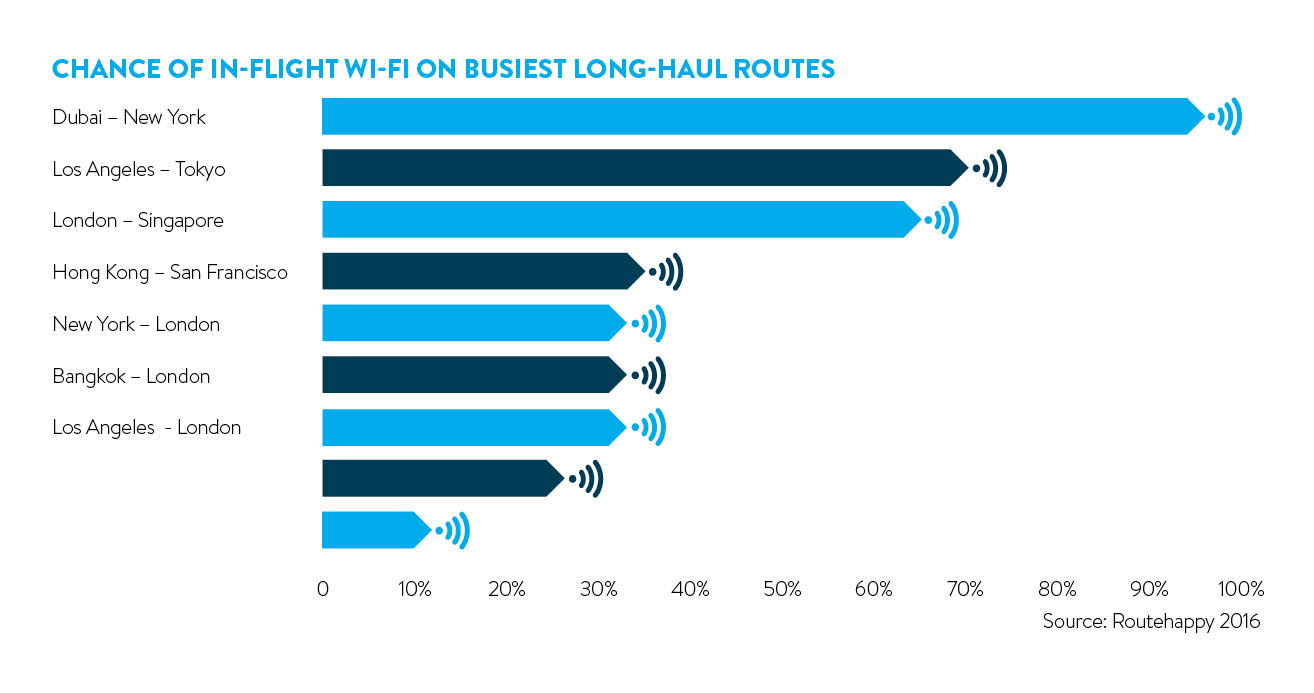 “It increases the flexibility of available work environments. This effectively increases the value of the aircraft, as it is no longer an unconnected environment. The options to work collaboratively with people on the ground, conduct conference calls or just answer and get replies to important e-mails are all the basics that we expect of any office.”

If you’re looking to add connectivity to your business jet or to charter an aircraft with the capability on board, it may be helpful to understand that there are different levels of satellite service offered via the L-band and Ku and Ka bandwidths. The bands refer to the radio frequencies used to deliver data to and from the satellite. L band uses the lowest frequency. Inmarsat offers its 432kbps SwiftBroadband on the L-band service, as well as a lighter version 200kbps SB200 service for business aircraft.

Today’s chart topper is Ku-band, which is offered through a worldwide patchwork of multiple service providers, including television and other media. This hotchpotch of providers is the main reason why travellers sometimes experience slow and inconsistent access mid-air. Panasonic, Gogo, Global Eagle and ViaSat Yonder all offer Ku, which has connection speeds of around 1-2 Mbps.

Business aircraft passengers now have an expectation of on-board internet as it proliferates in carriers in the US, Middle East and Asia in particular

The new kid on the block coming online this year is satellite provider Inmarsat’s Global Xpress Ka-band service. In terms of speed and bandwidth, this is internet today after it’s trained for a marathon. However, it requires a special antenna to reach the finish line. That’s coming, too, courtesy of Honeywell Aerospace. If you’re thinking of ordering one, bear in mind any extra equipment added to an aircraft requires a Supplemental Type Certificate (STC) to ensure it meets strict safety requirements. In January the US Federal Aviation Administration certified the manufacturer’s JetWave system to fly on the Boeing 757.

This certification paves the way for its installation on several other aircraft types which, according to Honeywell Aerospace’s vice president of safety and connectivity Jack Jacobs, should mostly happen by the end of this year. Business jets coming online include the Bombardier Global 5000, which has already been fitted and the Dassault Falcon 900, since this is Honeywell’s own in-house jet. Mr Jacobs says Ka will “provide passengers with high-speed, wireless connectivity comparable to their earthbound experience”.

Mr Hardie agrees. “Ka is important. It will support more devices in simultaneous use at acceptable connection speeds for many common functions. This availability brings an equipped aircraft a step closer to the ground-based capabilities that we are all used to and makes this capacity available to more people on board,” he says.

Business aircraft passengers now have an expectation of on-board internet as it proliferates in carriers in the US, Middle East and Asia in particular. According to data provider Routehappy, some 36 per cent of available seat miles are now offered with connectivity. So the service has struggled to keep up.

Leo Mondale, president of Inmarsat Aviation, says: “Airlines have previously struggled to meet the expectations of modern-day passengers for reliable, efficient, high-speed connectivity on board flights, due to the lack of available technology. The entry into service of GX Aviation this year will mark an important turning point.”

Derek Donahue, regional director Eastern Europe, Middle East and Africa for Satcom Direct, points out that although reception is vital to passengers, it goes unnoticed in most scenarios, just as it does on the ground. “‘It just needs to work’ tends to be the mantra from business aviation passengers,” he says. 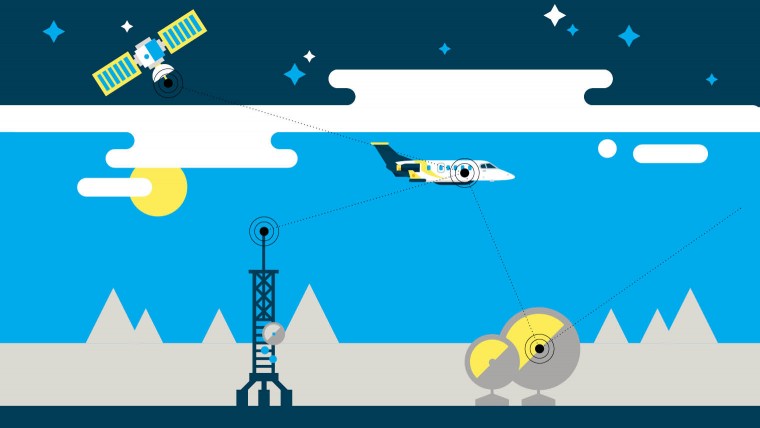 All three bandwidths can be beautifully integrated into business aircraft cabins. Companies such as Lufthansa Technik, Rockwell Collins and Honeywell collaborate with interior designers to create state-of-the-art cabin management systems that seamlessly fuse the connection to the outside world, with speakers added seamlessly into headliners, large bulkhead monitors and discreetly hidden tiny routers.

The major aircraft manufacturers are all well up to speed, too. Gulfstream’s flagship G650 comes with a broadband multilink high-speed data system, and a wireless local network that provides on-board printing, additional internet access and phone service. The manufacturer recently added Satcom Direct’s router to its G550 and G450 aircraft.

Dassault, meanwhile, offers OnAir’s inflight connectivity as a feature on its business jets, which enables passengers and crew to make and receive calls, text messages and e-mails, via their mobile phones. Embraer and Bombardier provide connectivity as standard options on their new aircraft. Most also offer packages to retrofit their older types.

On-board internet can still be a reasonably pricey proposition, depending on usage. Mr Donahue anticipates that as more aircraft transition to the newer technologies over the next 12 to 24 months, the cost will come down substantially. He cautions: “This does not always lead to lower operating costs, however, as passengers will soon have access to much larger bandwidth, and therefore a much wider range of activities and applications such as TV in flight.”

That is a point worth noting, says Mr Hardie: “It’s well worth getting the IT department involved from the get-go. Not just in terms of specifying hardware and determining what the aircraft will be used for, but also once it’s in use, to work with passengers on how they can get the best out of it.”

Mr Donahue adds: “It comes down to cabin bandwidth management and training clients on exactly how their wi-fi devices operate in regards to auto-updates, background applications and so on. In one scenario we’ve seen an aircraft with one passenger with three devices complaining about internet speeds coming to a crawl.  We discovered his iPad had been downloading the latest iOS and had been consuming all of the available bandwidth for the majority of the flight. Conversely we see customer flights with ten-plus passengers where everyone is able to maintain an outstanding experience.”

He stresses that if you’re planning on chartering a private jet you should ask whether there is internet available and, if so, what type of technology it uses, plus the hugely important question, what is the charge?  “This helps set expectations as far as speed and cost of use,” he says.

There is a lot to take on board working through the maze of service options on offer. Look on the bright side, though. If all goes to plan and you fly connected this Christmas, you can swerve the malls altogether and do your shopping from the comfort of your aircraft seat. 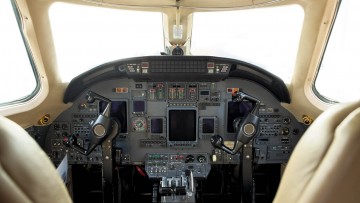 Alan Peaford is a London-based communications consultant with a large team worldwide, who manages communications strategies, and develops content for clients in Europe, the United States, Africa, the Middle East and Asia. He spends more than 40 hours a month in the air and staying connected is vital for his business. He also owns a small aircraft and sometimes flies himself to appointments.

“I find it important to be able to stay in touch all the time with the huge amount of e-mails that come into the business. It’s so useful to be able to spend eight hours catching up and being able to respond in real time,” he says. The ability to get online while airborne has become such a necessary factor in his working life that wherever possible he chooses a carrier he knows provides a good internet connection. “I get incredibly frustrated when it doesn’t work,” he says.

Connectivity has helped him in his working life on many occasions. He explains: “I’ve had incidences where plans have changed while I’m in the air, and I’ve been able to make other arrangements and get people to be where they’re supposed to be, and saved lots of frustration at the other end.”

For Mr Peaford being able to get online also enables his team, which comprises specialists operating remotely all over the world, to work with him in real time. It has also helped him to deliver the news on time. “The Canadian radio station CBC actually got hold of me on an Emirates flight desperate for a comment,” he says. “The phone rang on the aircraft. Unfortunately there was not a strong enough signal to do a radio piece, but I did it when we landed. They wouldn’t have waited if they couldn’t have got hold of me in the first place.”