Agile was once alien to project managers. It was too quick and volatile. Agile principles were suitable only for software geeks tinkering with non-mission-critical stuff such as games. It’s implausible for project managers to adapt plans on the fly. At least, that’s what the critics said.

And now? “The number studying AgilePM doubled in 2013 and doubled again in 2014. It’s doubling once more this year to 20,000,” says Richard Pharro, chief executive of APMG-International, the company that created the course in partnership with DSDM ® Consortium. He has seen a total transformation in the reputation of agile project management. “It’s going mainstream,” he says.

The calibre of professionals enrolling on the four-day course is proof of that. They come from construction and defence to transport and the public sector. The jobs pages for project managers are filled with demands for AgilePM practitioners.

The course, run by accredited training organisations, including The Knowledge Academy and QA, is viewed as a core continuing professional development component by human resources teams. Even for ultra-traditional government positions, which once steered clear of anything agile, the demand is that candidates possess the certificate. So what happened? 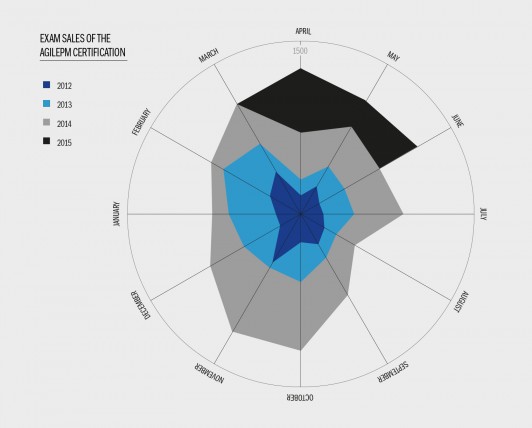 In truth, agile was always present in project management, just cleverly disguised. For starters, the logic behind agile is intuitive. It’s about handling change as it occurs during the lifetime of a project. Agile concepts, such as improvising and adapting, have always been part of the project manager’s toolkit, even if the official methodologies didn’t give them due recognition.

And project managers have been seeking out agile tuition for a surprisingly long time.

DSDM launched in 1995 offering a certificate in agile thinking. The course was comprehensive, including full governance modules, role definition and quality testing. DSDM appealed to a wide variety of professions. Project managers enrolled because DSDM was the only course which understood their needs.

Barbara Roberts, director of professional development at DSDM, was involved from the beginning. She recalls the days when agile and project management were rarely used in the same sentence. “The first agile method was RAD – rapid application development. It was seen as frightening by large organisations,” she says. “RAD got a bad name. The suggestion was that RAD stood for ‘rapidly achieving disaster’ or ‘really awful design’.

It was a smash hit. Now in its 20th year, DSDM is approved – and frequently mandatory – among organisations as demanding as the Ministry of Defence and the big pharmaceutical companies.

Yet two decades on and DSDM remains almost unique in the agile world for its emphasis on project management.

Ms Roberts says: “If you look at Scrum, they think the scrum manager is the same as the project manager. It’s not. It’s a completely different role.” Kanban (lean process management) is too narrow to include all the rigours of DSDM and is therefore not quite right for project managers.

Often, agile activists denigrate project managers. “One of the agile methods [advisers] told a large financial services company to sack all their project managers as they wouldn’t be needed. It was ridiculous,” says Ms Roberts.

The popularity of DSDM led to the launch of the AgilePM course in 2010. It’s similar to its parent, merely tailored exclusively to the needs of project managers. Non-relevant stuff is expunged. And more focus is placed on how project managers will use agile.

“We call it a foundation class,” says Mr Pharro. “It gives you a basic understanding of the techniques and terminology.” The course is short, but deep.

“You become a knowledgeable member of a team and can apply the agile techniques for project management. At the end of the third day you take a foundation exam, which is simple, multiple choice. There is a fourth day in preparation for the practitioner exam, which is a complex-scenario multiple-choice test.”

With mastery of the theory, graduates then return to work to gain practical experience. “The course is just the beginning,” says Mr Pharro. “You need to go away and apply it.”

Who is it right for? “Anyone can benefit,” he says. “The key is to be open to new ways of working. So some say it is more attractive to a younger generation as they don’t need to change their mindset. But I stress it is applicable to any organisation and any project.”

It is possible to study AgilePM anywhere globally. The APMG-International website lists providers.

Project managers considering enrolling on AgilePM can be enthused by the way other disciplines are following suit. AXELOS has just launched PRINCE2 Agile, an extension of the PRINCE2 qualification. AgilePM and PRINCE2 work together seamlessly and in harmony.

When qualified with AgilePM, candidates can use agile whenever and wherever appropriate. As Ms Roberts says: “Agile isn’t a binary, it’s a spectrum. You can be more traditional, with formal constraints, or work at the edge of chaos, if you are in an extremely creative environment, such as the media. Normally, most projects fall somewhere in the middle.”

The meteoric rise of agile in project management is in large part because it’s based on real-world challenges. The concepts are rooted in what project managers do in their jobs. The curriculum is updated regularly with fresh ideas imported from successful projects. That’s why project managers find it so practical.

“Agile has grown up,” Mr Pharro concludes. “It is now accepted and established. The world needs project managers who can react to a changing world. AgilePM helps them handle situations as they evolve. I’d urge anyone wanting to improve as a project manager to enrol.”