The Japanese prime minister’s ‘three arrows’ of economic stimulus and reform face a major test, as the government prepares a £205 billion stimulus

It may be flattering to have an economic policy named after you, but you have to hope it works. Japanese prime minister Shinzo Abe, fresh from a boost at the ballot box in elections to the upper house in July, has launched a new ¥28 trillion (£205 billion) stimulus package to try to rescue his ‘Abenomics’ agenda. 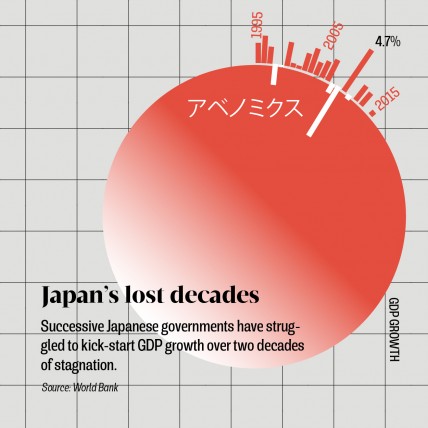 The Japanese economy has barely grown in two decades. Abe, who has been prime minister since December 2012, has tried to breathe new life into it through a programme of stimulus, economic reform and more relaxed rules on government borrowing and spending. The central bank has joined in, lowering interest rates to below zero to try to force banks and consumers to invest, while also intervening in the market by buying stocks and bonds.

However, growth has remained flat and companies are hoarding cash. The country’s prospects have not been helped by external conditions – panic after the UK’s vote to leave the European Union led investors to rush into the yen, which is seen as a safe haven and a store of value.

So far, then, Abe’s so-called “helicopter money” has not worked, or at least not worked as well as it needs to, in order to get growth moving at a pace that the country needs if it can head off its longer-term challenges of an ageing society and falling productivity.

Whether the latest stimulus – which follows a ¥10.3 trillion round in 2013 and a ¥3.5 trillion round in 2014 – will finally be the kick the economy needs, or whether it will prove to be simply throwing good money after bad, could determine whether or not Abenomics becomes a chapter or a footnote in economics textbooks.