Cutting-edge technology such as holograms and augmented reality are on the fringe of mainstream events, but have yet to make a major breakthrough as organisers prefer to go mobile

Just as it has with every industry, technology has invaded the events sector, churning out buzzwords such as holograms, augmented reality, closed social networks and hybrid events. But, just like in other industries, the truth on the ground is often quite different from the high-tech future the technology firms are touting.

For most, mobile is still at the cutting edge of the technology that’s actually being deployed at events, conferences, exhibitions and meetings, and it’s the technology that organisers will be focused on in the immediate future too.

Ticketing event firm Eventbrite already embraces the mobile experience, giving organisers a mobile app that turns their smartphones into QR (quick response) or barcode scanners to check attendees into events and giving delegates a mobile app that stores tickets for any event run by the firm.

“One of the worst experiences to have as a delegate is to arrive at an event and there’s a big queue, and you have to wait for ages to check in. The fact that any event organiser can do this high-speed scanning means it’s a much more seamless check-in process,” says Marino Fresch, Eventbrite’s senior group marketing manager for the UK and Ireland.

“The attendee app is essentially a little bit like a passbook for tickets, it remains on the delegate’s phone. For any event they attend, the ticket will be in that app so they can access it wherever they are.”

Events tech startup Noodle, which was founded by managing director Clemie Hardie in January 2013, is betting its business on the use of mobile apps at events, supported by RFID (radio-frequency identification) smart badges. Noodle is one of a number of creative agencies that are now specialising in events technology.

“What I’ve seen is a lot of the new technologies being showcased at events specifically aimed at events professionals. But I think we’re kind of doing the most cutting edge that you’ll see at a non-industry event,” she says.

“As a new startup, we don’t feel overly competitive. We’ve got more work than we can deliver on, and that’s consistent across the industry at the moment because organisers are just coming to grips with how they can make their events more efficient and engaging through the use of technology.”

Noodle use smart badges to augment their mobile app so that delegates aren’t constantly glued to their phones at events. The badges are touched in at interactive swipe or touch points to give delegates updated information or content and help organisers keep track of popular sessions and other helpful data. But with the advent of NFC (near-field communication) on mobile phones, Ms Hardie hopes eventually to be able to get rid of the smart badges altogether.

“The area we’re most excited about, especially with the introduction of the iPhone 6, is the NFC functionality,” she says. “That’s really exciting for us because it makes the placement of these interactive touch-points really scalable and applicable to many more different event environments. So it’s conceivable that you could go to Glastonbury, walk out of seeing a band and tap your phone at a poster and collect ‘likes’ on Facebook or get a bonus CD stored away on the app.

Eventbrite’s Mr Fresch also sees mobile as the future for event organisers. “We’re at what’s being referred to as peak desktop – we’ve reached the point where desktop sales are declining, and mobile and tablet sales are increasing. Increasingly, organisers will be ensuring that every part of the event experience is optimised for mobile,” he says.

Mobile apps are not just tools for content. Using iBeacon technology, they can be interactive maps for delegates to find their way around an exhibition, they can include polling and Q&A functionality, connect delegates to each other, to speakers and exhibitors, and function as a closed social network for event networking.

But event technologies can present their own difficulties for smaller organisers such as Solar Media, which does a round of small annual events of a few hundred attendees and one large event of several thousand each year.

“I’ve seen a lot on augmented reality and a lot about iBeacon,” says head of marketing James Wight. “It’s all good and well, but it depends on what software you have on your phone. Especially now, it’s more fragmented than three or four years ago when you could depend on most people being on iOS.

“That’s the problem, you get the sales pitch in an area that’s exciting and then you drill deeper into the devices, the bandwidth and other technological challenges, and realise it’s actually a lot of work.”

Solar Media has just launched two new technologies for its events, a web app that’s mobile responsive, to cut out interoperability issues, and live streams for some of its events to go out to delegates who can’t make it onsite, turning them into hybrid events.

“Traditionally, setting up meetings and networking are key at these events, and it was a manual telephone process to set up these things before, which is just not efficient. With the app, you can smooth things and give people nudges rather than be the organiser of something that should be user-generated,” says Mr Wight.

“This moves towards a community model around the event and not doing that these days is probably fatal to be blunt.”

The app is also functional across multiple Solar Media events, allowing delegates who attend more than one to keep in touch with each other and with the company in between conferences.

The far-off future might include broad use of technology such as holograms and augmented reality, but in the immediate future what event organisers and delegates are looking for are ways to integrate the technology they’re already carrying around with them.

Hybrid events that feature delegates or speakers attending virtually through holograms are something that big events like to showcase, but it’s not something that the events sector at large is buying into yet. Also Mr Wight points out there’s a fine line between offering live streams and webinars to those who can’t attend, and tempting potential delegates, even speakers, not to bother attending when you have these kinds of alternative offerings.

Buzzwords of the future might be holograms and augmented reality, but the greater capability of smartphones is the technology changing the delegate experience right now. 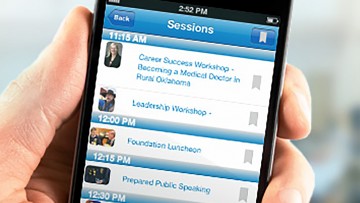 The ability to market events digitally, through e-mail and social media, has been a massive boon to the events industry. The costs and labour intensity of direct marketing, such as “snail” mail and telephone calls, have been hugely reduced and an organiser’s reach has been greatly extended.

But as much as organisers would like to focus solely on digital marketing, those old ways haven’t disappeared everywhere just yet.

Big firms such as CVENT are marketing mainly online, says marketing director for Europe David Chalmers. “We don’t normally do any kind of physical marketing such as direct mail these days. E-mail is very much the priority and promoting your event through social channels is obviously a big priority,” he says.

But smaller firms such as Solar Media continue to hit the phones and send out letters, according to head of marketing James Wight.

“We do still have an events sales team, which is handy for our international events, because you still need to get on the phone to get these conference delegates on board. And we also do a small amount of direct mail, which is integrated into the online strategy, where they get something dropping on the mat a short while after the e-mail,” he explains.

Combining different forms of marketing, physical and digital, is the key to successful promotion. Mr Wight’s direct mail marketing is always personalised and only goes out to the hottest prospects, who’ve usually been contacted digitally or on the phone.

CVENT, meanwhile, are getting more and more engagement and registration from social media channels, alongside its e-mail marketing campaigns.

And there are attendees who shy away from the digital world. Mr Wight points out that certain industries, such as medical devices in the United States, still like to have a shiny brochure they can lay their hands on.

However, he hopes that having a web app that is applicable to multiple Solar Media events will help engagement to continue digitally between events, supporting the firm’s e-mail and direct marketing campaigns.

“The app keeps conversations going and adds more engagement between events,” he says.