British companies are preparing themselves to take advantage of Iran’s reintegration into the global economy, but experts warn that there are still many barriers to entry

Take a country of 80 million people — a majority of whom are under 30 and highly educated — which has the second-largest gas reserves and fourth-largest oil reserves in the world. Then imagine it has been locked out of the global community for almost four decades.

This is Iran, and January’s landmark nuclear accord between Tehran and Western powers lifting many long-standing sanctions means the economy, generating $400 billion (£270 billion) a year, will finally be fully open for business.

Its reintegration into the international business world will mark the biggest economic transformation since the fall of the Berlin Wall in 1987 and the decision by China to join the World Trade Organisation in 2001.

For economists, Iran represents the final emerging market opportunity. The Tehran Stock Exchange, which has a total market capitalisation of $100 billion, has seen its main index surge by 30 per cent since the nuclear accord was signed on January 16. The Iranian government is keen to expand its production and export of oil and gas, as well as minerals such as copper, iron, lead and zinc, and it will need skilled foreign companies to help them upgrade their energy facilities.

But there are many other opportunities. “This goes way beyond just an oil and gas story. It is not just another Gulf state,” says Charles Robertson, chief economist at Renaissance Capital.

Iran plans to upgrade its rail network and ports and plans major investment in infrastructure. It wants to expand its automotive sector, which produced 700,000 cars a year before sanctions. The telecoms, pharmaceutical and aerospace industries will be looking to expand, while on the services side there is potential for business in the retail, professional services and tourism sectors.

Indeed, within days of the accord being signed, Airbus finalised the sale of 118 planes to Iran Air worth $27 billion to renew its ageing passenger fleet.

Lord Lamont, the former chancellor of the exchequer in John Major’s government and now the UK’s trade envoy to Iran, points to economic growth forecasts between 4.4 and 5 per cent over the next five years, its small budget deficit and current account surplus — all facets the British government must be jealous of.

“Iran is a unique proposition, a relatively mature economy with good infrastructure, improving economic fundamentals and hopefully improving political conditions,” he told an audience of 150 executives at the Iran Trade Conference in London in April. 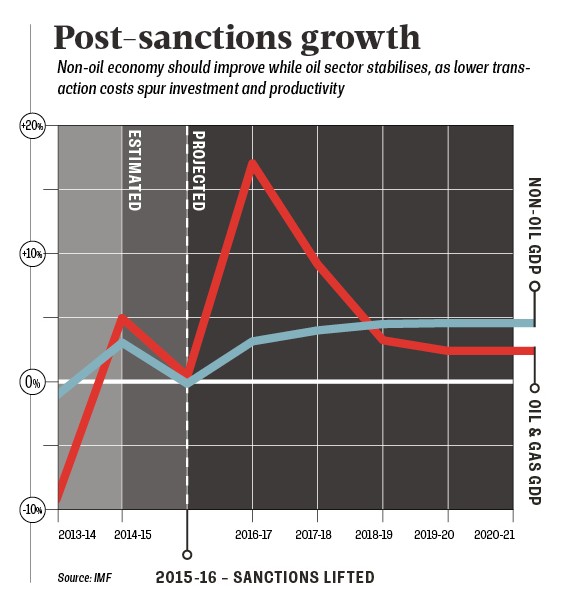 But firms are likely to face hurdles when doing business in Iran, which ranks 118th out of 189 countries ranked by the World Bank for ease of doing business. Corruption is also a major issue.

But the biggest obstacle is the fact that the US still has sanctions in place and holds a large list of blacklisted individuals and companies which means companies need to carry out expensive due diligence searches to rule out any suspect connections to an Iranian entity they want to work with.

Even more worrying is the fact British banks with exposure to the US are unwilling to lend because of fears they could face severe financial penalties for breaching US sanctions.

Lord Price, the minister of state for trade and investment, says he wanted UK banks to “play their part” and that British officials were “actively talking” with their American counterparts — “We are having discussions with banks over how we can work through this.”

Andreas Schweitzer embarked on a wind energy project in Iran seven years ago — the renewable energy sector was exempt from the sanctions regime. He established his own engineering office to develop wind farms because there were not enough indigenous resources. “We had quite a learning curve on finance and industry to get where we wanted to go,” he says.

In 2014, he set up Arjan Capital, a firm that provides legal, financial and industrial advice and support to EU and Swiss companies that want to come to Iran. He advises that companies wanting to enter Iran should find a regional bank with no US exposure. German and Italian banks have been proactive in offering loans for Iranian ventures.

He said that businesses needed to do a lot of research to find a trustworthy partner in Iran. “It’s a bit like dating,” he says. “You have to trust your instinct. It’s all about reputation and word of mouth is important in Iran. If you can talk to good people who will give you an honest reply, you can probably get a very good profile of the business.”

Matthew Townsend, head of the Environment and Regulatory Law Group at Allen & Overy, says that businesses need to distinguish between the hype and reality.

“We are in a transition phase and there are some constraints that we cannot ignore,” he says. “The hype is that Iran is completely open for business, everybody can pile in and the sun is shining. The reality is that legally and commercially it will take time.”